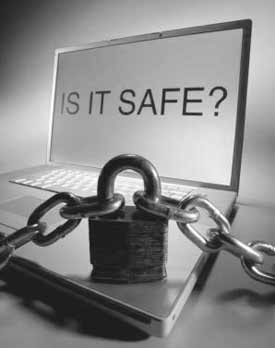 What you put on the Internet may come back to haunt you was the warning given to students last month by a panel of cyber experts.

October marks the eighth annual National Cybersecurity Awareness Month created by the U.S/ Department of Homeland Security. Mercy College celebrated by holding a panel discussion on security and safety in social media, sponsored by the Cybersecurity Education Center and the Mercy Alumni Office.

On October 20, Zhixiong Chen, Director of Cybersecurity, informed Mercy College staff and students about the type of media used everyday and the type of viruses that can be leaked to their computers if they do not use proper cyber security. The panel included V.C. Shreednar, who is a part of IBM research, Carl Davidson, Brett Stein, John Galletta Jr., and Nanjun Zhou.

Chen started off by informing everyone that there are 109 social media websites. The Internet has grown 14 percent since 2009. Nearly 30 billion pieces of information are shared over the web to places where the person sharing it doesn’t even know where it’s going. 3,000 photos are uploaded per minute. 2 billion videos are uploaded per day. All of these pieces are shared throughout the Internet, and anyone can see them.

Spam, phishing, and malware’s percentages all rose since 2009, the United States being the top country hosting malware on the web. There were 286 million malware attacks in 2010, and a 93 percent increased in web attacks.

One of the most popular websites today is Facebook, and it has more than 800 million users. Out of those users, 350 million access the website through their mobile device. By the end of this year there will be at least one million new members joined. Facebook offers 17 different languages. The website has a $4.27 billion revenue. Facebook has taken over Google and the most visited website by people. The statistics proved by Chen stated that if Facebook were a country, it would be the third most populated.

Social networks are not free. CPU, Bandwidth, Power and coding cost money. “The more information you provide, the more capital you provide to the social networking company,” Chen informed. “There will be an estimated $587 billion in global advertising in the year 2012 on Facebook.”

“A large part of technology has influenced time and space. Occupy Wall Street would not have happened without social networking,” Stein stated. “Facebook brings people together and makes everyone like an older village where everyone knows everything about each other. However, it also tears us apart. Antisocial people who seek to bring harm may use Facebook as a way of cyber bullying and cyber attacks.”

The lines between personal and social life are growing shady. People post very personal things going on in their lives to let everyone else know what they’re going through. Many people feel as if that’s the only way people will listen to their problems, and that it’s the only way to express how they are feeling.

Nothing you share on the Internet is private, the experts warned. The work environment even shares information that some people may not appreciate being shared. Financial companies want to monitor everything that goes in and out of the company.

The experts offered some advice: When uploading pictures or videos that are inappropriate based on whether you are going to school or have a job, it would be best to not wear anything that represents that school or job. If you are underage and have pictures of yourself drinking and you’re wearing a college t-shirt, or a work t-shirt with the logo on it, you’re representing them and giving them a bad reputation. When that company or school comes across those pictures, it can leave you in a lot of trouble.

The safe thing to do when making a social media profile about yourself, other than not making one at all, is to not include any personal information. Do not put of a picture of yourself that you would not want strangers to see.

“Nothing put on the Internet is safe and will not stay only on that social network,” the panel warned.