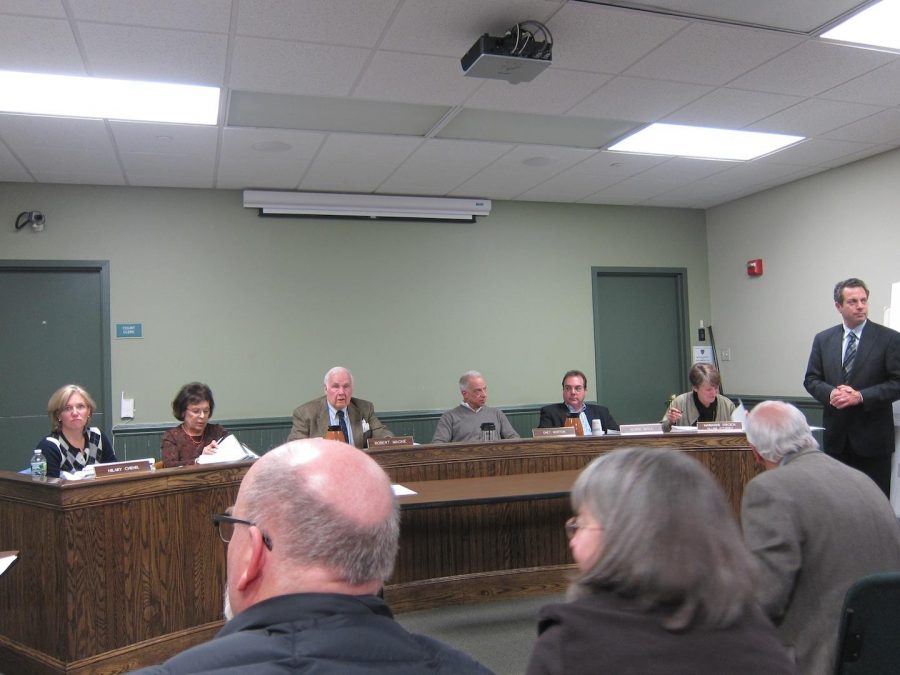 On Jan. 4, the Irvington Planning Board voted unanimously to accept the Draft Environmental Impact Statement that the college proposed to them despite protests from local residents and the Dobbs Ferry Mayor Hartley Connett.

Mercy College lies between the border of Dobbs Ferry and Irvington. The campus that is to the left of the parking lot is a part of Dobbs Ferry, and the remaining campus on the right side is in Irvington.

The proposed action includes plans to build an academic quadrangle on the Irvington side of campus to house faculty offices for each school that currently does not have offices of its own. Also, the quadrangle is proposed to hold any events that currently occur in the Main Hall’s auditorium.

Verrazzano Hall holds events and meetings between faculty and staff and would continue to hold these existing meetings.

Mercy Hall, which currently serves as classrooms and offices on the Dobbs Ferry side of campus, is going to be included with the conversion of approximately 5,000 square feet into residential dorm rooms. The project proposes to be connected to public water and sewer.

The additional dorm rooms do not mean living in hotels is going to be put to an end. The college is planning to increase the number of students living on-campus from the current level of 325 to approximately 600, while continuing its current program of off-campus housing.

However, the school doesn’t plan on creating these buildings for another five to 10 years.

A second meeting was held on Feb. 1 for a public hearing on the DEIS, Special Permit Application and proposed site plan amendments.

This public hearing was a chance for residents to include their opinions on the potential impacts on the surrounding community. These impacts may include traffic and the ecological disturbance.

David Steinmetz, partner at Zarin and Steinmetz, helped present the concerns that the residents have on the expansion. He presented to the board the opinions of 200 different families who are a part of the Ardsley Park Property Owners Association (APPOA) who have different inputs.

APPOA is a community based not-for-profit organization composed of both Dobbs Ferry and Irvington residents.

Steinmetz questioned, “Verrazaano Hall is going to hold meetings. How many? How often? At what hours are these meetings going to be held? The size, mass, and location are not consistent use of the building for staff.”

Irvington resident of 20 years, Ann Schneider said, “Washington Avenue and Langdon Avenue are like a raceway for the cars going to and from the school.”

Washington Avenue is a side street that runs parallel to Broadway where students may cut through to avoid the traffic lights on Ashford Avenue.

Mark Hallock, a Dobbs Ferry resident, included, “The infrastructure is not suited for the level of traffic. There are no sidewalks in the area where I live, so my children walk in the street to go to school.”

A recent submission to the board shows that 34,608 cars went in and out of Mercy College in one week.

Schneider added, “This is a menace!”

Connett noted, “It is great to have such an educational institution in Dobbs Ferry and to see the college be successful into the future. With that, however, comes a greater responsibility from the institution in return for the needs and concerns of the village, and the added costs and burdens placed on the taxpaying residents of the community.”

Suggestions from residents included limiting the number of cars entering and exiting the school by reducing the parking, and promoting public transportation like buses and trains.

According to the Mercy College Master Place plan, which was presented to the Turner Mill Group, the driveways on the north portion of the campus serving Verrazzano Hall, Maher Hall and Mahoney Hall are connected to the remainder of the campus by a ten foot wide driveway that empties into the central parking lot.

This driveway and lot will be eliminated as part of the Faculty Offices and Quadrangle development. A new car-accessible drive-way will be developed to the west. The new configuration will better separate pedestrian and traffic.

Eight parking spaces, approximately, will be removed from the Central Parking Lot to accommodate a new landscaped, traffic-calmed pedestrian crossing between Main Hall and the new faculty offices and Quadrangle project.

Steinmetz suggested, “The institution should have gated access in and out of the campus with magnetic swipe cards, which will also prevent the number of people sneaking into Mercy for easier access to the Ardsley on Hudson train station.”

With the expansion of Verrazzano Hall and the building of the quad on the open land on campus, demolition of trees will be executed.

“About 110 trees are going to be demolished,” Lauren Levi, resident of Irvington for 22 years, researched. “Where are the animals that live in the area supposed to reside? Has the college considered the size, ages, heights, and girth of the trees, and whether they can be transferred to another area?”

Demolition of trees is not the only concern of residents that live on the perimeter of Hudson Road West. There have always been concerns of the college being so close to the homes along the road.

Daniel Rood, whose house is facing the campus on Hudson Road West said, “A student accidentally walked into my home thinking it was a part of the Mercy College campus. The school is too close as is! How much closer do they want to get?”

Despite resident protests, the school hopes to achieve an enhancement of the college experience for students, faculty, and staff. The belief is that the Mercy campus experience will be improved by expanding and reinforcing connections with the surrounding community.

In both its operations and its development, it was expressed at the meeting that the college should carefully consider effects on the surrounding community and design projects that meet the college’s needs while minimizing negative impacts to its neighbors.

“They are not good neighbors!” Levi enthused.

The expansion hearing will remain open until hearing from the Dobbs Ferry residents’ opinions and after achieving the Special Permit Application.

Mercy College chose not to comment on the hearing to The Impact.

Separate applications and land use reviews and approvals will be required for any action within the Village of Dobbs Ferry.