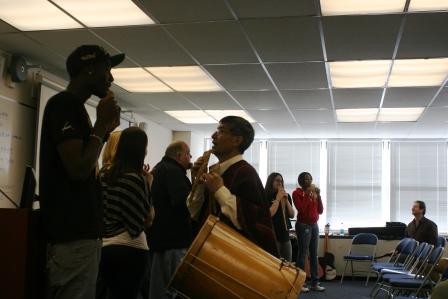 Music is a storytelling tool used across the world that is universal to all cultures, as proven by the performance of Tahuantinuyo this month in Main Hall.

Traditional Andean music is a folklore style of music played with hand made, natural instruments that portray feelings, and expressions around the many cultures from parts of Argentina, Bolivia, Ecuador, Chile, Columbia, Peru, And Venezuela. Andean music popularity is measured across Latin America differently, having its depths to the public in rural areas.

Guerrero comes from an interesting cultural history, as he was born in Ayabaca, Peru, and has traveled the world to present at many colleges. For Guerrero, it all started at an early age playing guitar, and he has been playing music passionately for the past 42 years.

Guerrero claims that the media’s pressure had led to his dismissal from Peru, and he relocated to the United States in 1969 to continue his pursuit of artistic freedom.

“When coming to America, I wanted exposure. I started to play with other similar musicians,” he said. “It was refreshing to leave the controversy behind me.”

When arriving in America, he began studying mechanical engineering, but he spent his spare time playing in Central Park.

“I was homesick, so I began playing and tried to seek out other Andean performers.”

That was the beginning of how it all started for Guerrero’s future career with music and with his new friends. Later in life, his career picked up with his band, and led to many concerts, as well as presenting to colleges such as Queens College, Columbia, NYU, and many galleries.

According to Guerrero’s bands website, Tahuantinsuyo is a pioneer folk music group from the Andes, they helped pave the road for many Andean groups that some may come across with in the United States.

The members of band are Guerrero, Fernando Leyva, John Freire, Andrés Jimenez, Alcides Loza and Saúl Guerrero, and in many occasions they are joined by Cesar Vele. They have played all over the world together.

They are family and friends who share the common goal of trying to keep the traditional Andean music alive and to help their people to identify with their culture.

Together, they don’t consider themselves just a music group, but a family whose goal is keeping the tradition of Andean music alive by assisting people who would like to distinguish their inner culture.

For those who would like to experience more of the Andean cultural music, Tahuantinsuyo’s website can checked out at www.Tahuantinsuyo.org.