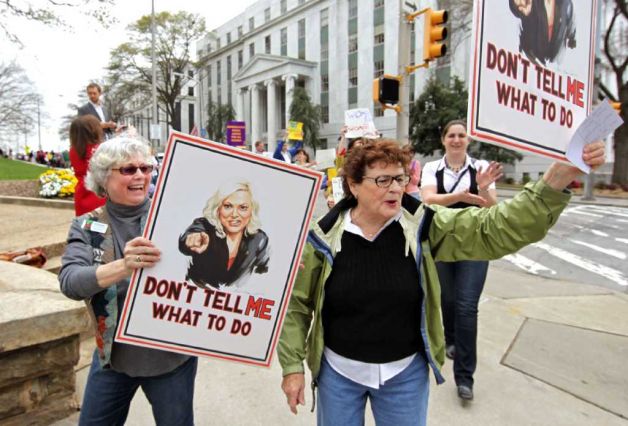 On March 1, the Senate defeated an amendment proposed by conservatives that would have allowed employers and insurers to opt out of portions of the President’s health care law they found morally objectionable, including birth control

Defenders of the bill claimed that amendment would give health insurance companies free reign to opt out of many procedures and that they deny many claims already.

The bill was adjusted in mid-February to shift the expense solely on insurance companies.

“We have never had a conscience clause for insurance companies,” said Sen. Barbara Boxer, D-California, to the Washington Post.  “A lot of them don’t have any consciences anyway.”

“I feel that there are far too many unwanted teen pregnancies. Requiring health insurances to cover the cost will allow sexually active teens and adults to have better access to contraceptives and will drastically change those numbers,” said Nicolette Gebhardt, a sophomore media studies major.

Others were anxious to voice their disapproval.

“It’s a sin and completely against my religious views,” said Ariel Costa, freshman Physical Therapy Major. “As a Catholic, I don’t believe in the use of birth control or other contraceptives. We were placed on this earth to procreate and this bill negates God’s wish for us. Plus, what about the idea of separation of church and state?”

Prior to placing the burden on insurance companies, all organizations, both religious and non-religious, were required to offer free contraceptives to women.

However, when the concept of separation of church and state began to find its way into the new plan, the Obama Administration, developing a better sense of the public’s view, altered the original plan.

On Feb. 10, 2012, Obama announced that religious employers would not be required to offer free birth control to workers and the onus would instead be put on insurers.

This compromise by the Obama administration sought to accommodate religious organizations such as Catholic hospitals and universities who were enraged by the new rule requiring them to offer free contraceptive to women employees.

“Religious liberty will be protected, and a law that requires free preventive care will not discriminate against women,” Obama told reporters in the White House briefing room. “The result will be that religious organizations won’t have to pay for these services, but women who work at these institutions will have access to free contraceptives just like other women.”

Republicans demanded the amendment because they claim it is a violation of the First Amendment’s protection of religious freedom by forcing employers and insurers to pay for treatments that are against their faith.  Presidential hopefuls of the Republican party took different approaches on the issue; Mitt Romney did his best to avoid the issue while Rick Santorum openly stated that contraception was against Roman Catholic beliefs.

In New York, a poll was conducted from Feb. 8 to Feb. 13 to reveal the public’s view on the bill.

According to the New York Times, when it came to the original proposed plan, the public was in support 61 percent to 31 percent. After the bill was altered, requiring all private health insurance plans to cover the full cost, the public remained in support, with a slight 66 percent to 26 percent change.

The numbers, which come with a margin of error of plus or minus 3 percentage points, were better for Obama than his numbers on other issues. When it comes his stance on foreign policy, 50 percent approve while 36 disapprove and on Afghanistan, 51 percent approve to 36 percent disapproval. The numbers from this poll nearly mirror the public opinion on his handling of the federal budget deficit, where he loses 32 percent to 59 percent.

While Mercy students remained divided, there are still several students who are indecisive, searching for more information and answers to their questions.

“I’m for the cause, but am curious as to what that means will happen with my health insurance,” questioned Jessica Pfeifer, a freshman psychology major. “Does that mean I will have to pay more, because if that’s the case, females can save their money and visit the nurse. Condoms are free that way.”