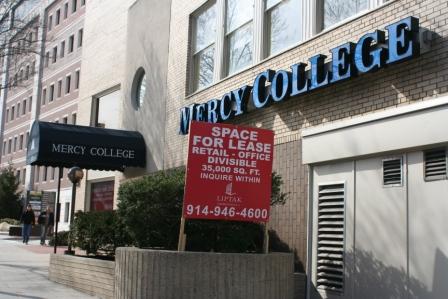 Mercy College is opening one door and shutting another.

The college’s White Plains campus, located on Martine Avenue in downtown White Plains, will be shutting down at the end of the summer 2012 term. This time period was chosen in order to ensure a successful transition with minimal disruption to students and faculty.

Many White Plains students were puzzled about the decision when they were informed via email at the end of last semester. Lauren Gelaso, senior associate director of public relations, commented as to why the campus is closing.

While the public relations office did not comment on a specific reason for the closing of the campus, many students and faculty have told The Impact they suspect it is due to a combination of the newly acquired renting of Victory Hall on the Dobbs Ferry campus, the rising costs of rent in White Plains and the potential building of an academic quadrangle in Irvington.

The campus community, included staff and students, was notified last semester in the early stages of the process.

Many students expressed concern in regard to registration for the upcoming fall 2012 semester. Rumors have been floating around campus that students at the White Plains campus received priority registration over other students in the college.

Gelaso put an end to the rumor. “To ensure a smooth transition, all current White Plains based students received priority registration for fall 2012 beginning March 3, 2012.”

Mixed feelings fall among the students that are currently attending other campuses.

Some students felt the decision about registration was unfair. Junior Education major Timothy Rodriguez, who attends the Manhattan campus, commented, “It’s unfair to those who attend other campuses. We work just as hard as the students who attend (White Plains) so there should be no priority just because their campus is shutting down.”

Freshman media studies major Michelle Stark agreed with the early registration decision. “We should have priority over the other students. Our campus is the one that is closing!”

Students interviewed by The Impact felt that it was strange for Mercy College to be closing a campus as the enrollment has grown over the past few years. Gelaso confirmed their was a rise in applications to Mercy College for the upcoming fall 2012 semester compared to last year.

“As of March 26, 2012 the college has received over 8,700 applications for the upcoming fall semester, which is a 6 percent increase from last year at this time and an increase of 75 percent since 2010. We are very excited to welcome the incoming freshman class to the campus community.”

The White Plains option will be taken off of the school’s application.

Victory Hall on the Dobbs Ferry campus will be the new home for the former White Plains students. They will share two floors of the former high school next school year.

However, there was a concern by students if the White Plains faculty will retain their positions moving forward.

Some students felt the increased traffic on campus would create more social life, while others felt it would feel congested.

Stark countered, “The students who live there should find other places to park to make room for us.”

White Plains student Damien O’Brien said, “I am upset that the campus is closing down, because it is a nice campus, but I will not miss having to pay for parking on the side street.”

Rodriguez opinionated, “I think this is going to make the Dobbs Ferry campus more hectic than it ever was.”

Mercy College foresees the move being as being beneficial to all programs involved.

“This transition serves as a testament to the renovation and revitalization that has taken place throughout the college,” Gelaso stated. “Mercy College is always seeking ways in which its students can benefit academically and have a rewarding campus experience.”

Some students are excited for the transition. “It’s a good that the college is thinking wisely about its future. Too bad it took so long,” said Martin, who also commented on the outrage of local citizens in regard to Mercy’s plan for a quad. “I wonder how they’re going to feel about more traffic coming from White Plains.”