America Is Now Watching The ‘Watchman’ After Trayvon Shooting 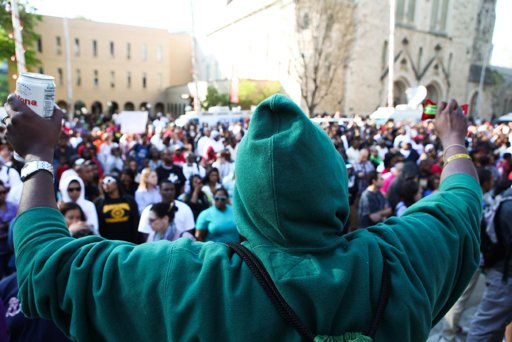 The United States has been described many times as the land of the free and home of the brave.

United States citizens are bound to the laws of the land. Whether the law is constructed by state or federal government, one must act ethically or find himself in trouble with the police.

However, with every law, there is a certain set of circumstances that allows one to disobey, violate, or temporarily abstain oneself due to personal ethics.

As of April 11, George Zimmerman is no longer immune to being charged with murder in the state of Florida. After the death of Trayvonn Martin in the last few days of February, it almost appeared as if Zimmerman would escape the entire legal process all together. Zimmerman now faces charges which include 2nd degree murder.

On April 17, Mercy College and the CSA hosted the first Hoodie day on the Dobbs Ferry campus in memory of Trayvon Martin. All students were notified not to wear the hood up during class sessions.

Justifiable Force is described as follows: Under Statute 776.013, if someone unlawfully enters your dwelling and you possess “a reasonable fear of imminent peril or death,” lethal force may be justified. This law does not apply to situations in which a law enforcement agent attempts to enter a dwelling as part of his official duties.

The “Stand Your ground” law, deemed by the media as “shoot first, ask later;” states that “a person who is not engaged in an unlawful activity and who is attacked in any other place where he or she has a right to be, has no duty to retreat and has the right to stand his or her ground and meet force with force, including deadly force if he or she reasonably believes it is necessary to do so to prevent death or great bodily harm to himself or herself or another or to prevent the commission of a forcible felony.”

“I want to see George Zimmerman put in jail, and I want the justice system put an end to all of these double standards,” stated Mercy College junior Michael Barber.

In the United States, a man is innocent until proven guilty, but in the last month, Americans have realized that this isn’t always the case.

Unfortunately, another notion rattles the moral fiber of this country. That notion is that laws within our country can be used in order to get away with murder.

Twenty-eight year old  George Zimmerman has become the face of Florida’s “Stand Your Ground” law, after being solely responsible for the death of 17 year-old Trayvon Martin.

Zimmerman’s attorney claims that he was within his rights, citing the Florida law as a shield against possible prosecution from the police department located in Sanford, Florida.

On Feb. 26 of 2012, Zimmerman made a 911 call, in which he describes the 17 year-old Martin as a suspicious character. Zimmerman explained to the 911 dispatcher that there had been numerous thefts in the neighborhood.

Throughout the conversation with the 911 dispatcher, Zimmerman would begin to grow more aggressive. Zimmerman was convinced that the seventeen year old Martin was guilty before approaching him.

Zimmerman began following Martin throughout the apartment complex, against the advice of the 911 dispatcher. The dispatcher, who had stated that “they” referring to the police, did not want Zimmerman to follow Martin, but instead, wait for police to respond.

While, it is still open to interpretation, many who have listened to the infamous 911 call have heard Zimmerman state, what is believed to be a racial slur.

Zimmerman would eventually encounter Martin, and the death of this 17 year-old boy was captured during a neighbor’s 911 call to police.

Zimmerman, who failed to disclose that he was armed to the 911 dispatcher, had gotten into a physical altercation with Martin that ended with a fatal gunshot wound to Martin’s chest.

Upon the arrival of officer from the Sanford Police Department, they witnessed a bruised and bloody Zimmerman, and a now dead, Trayvon Martin.

Zimmerman would claim self-defense and police would take him at his word. The death of a young black male, who happened to be wearing a hoodie, had been deemed guilty by the word of one man, George Zimmerman.

The Sanford Police Department would experience a severe backlash based on the ever evident case of racial profiling.

The department had done little to investigate the actual events that took place that evening, according to public outcry and sentiment.

Eventually the facts became aware to the public: Martin had gone to the store to buy a snack, and upon returning to his home, was baited into an altercation that led to his untimely death, but most importantly, Martin had been unarmed at the time of his death.

Zimmerman would initially be portrayed as a rogue neighborhood watchman.

However, the manual from the National Neighborhood Watch Program, states: “It should be emphasized to members that they do not possess police powers, and they shall not carry weapons or pursue vehicles. They should also be cautioned to alert police or deputies when encountering strange activity. Members should never confront suspicious persons who could be armed and dangerous.”

“I don’t believe this is a case where self-defense is the conclusion. The police told Zimmerman to leave the boy alone, and he killed him anyway,” explained Barber.

While the case harbors a lot of racial tension the march did not. People of all races and creeds paid their respects to the fallen child.

Parents and children were in attendance, some imagining what things would be like if had been their child that this had happened too.

Dayna Green, a 31 year-old mother who attended the “Million Hoodie March,” said, “When I first heard Trayvon’s story, I thought how sad it was, but the more I learned about it, the more I became infuriated. And I knew that I needed to use my voice to demand Justice for this little boy. I have a son of my own. His name is Jayvon. This story really hit me hard, because this could have been my son.”

Green would continue, “I decided to go to the ‘Million Hoodie March’ in NYC, and I also decided to take my son. I felt it was important to teach him about the injustices all can face, and how all must never settle, and to always stand up for what’s right,” she said.   “The march was beautiful, seeing people of all races coming together for what’s right. I was moved, and to have my son there with me participating really just let me know that the fight does not stop here.”

Green would state adamantly, “I would like to see Trayvon’s killer, Mr. Zimmerman, charged and arrested. I would also like the Sanford Police department to be held accountable for the mishandling of this case from the beginning. I also would like Americans to open their eyes to racial profiling.”

Zimmerman, a self-appointed neighborhood watchman, has opened the eyes of Americans across the country. Americans are now watching him.