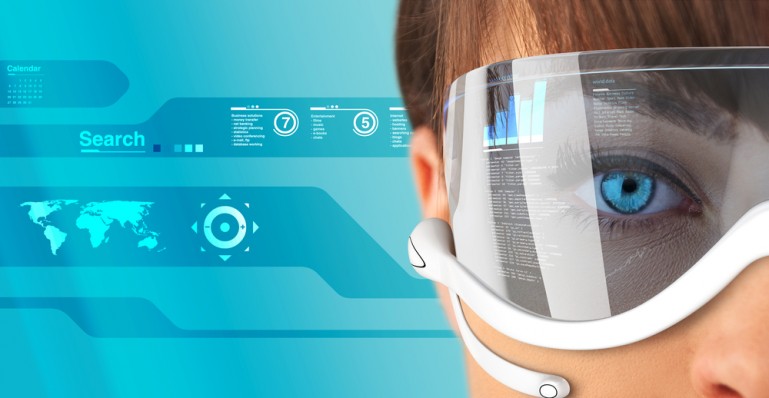 Google is working on a new piece of technology that will rival all smart phones and tablets, and the technology appears to be right out of a science fiction movie.

This new product is being developed by the Project Glass team and is being marketed under the name Google Glass.

Glass will eventually become the first mass produced augmented reality system. Glass is a small transparent lens mounted on what looks like a pair of glasses. The weight of the product is surprising and has been described as light as a pair of regular glasses. Developers say that the first model will be the biggest model they will make with later designs being lighter smaller and even mountable to prescription glasses.

Glass aims to project non-intrusive, transparent dialog boxes onto the environment. This new way of displaying information goes way past HD screens and retina displays. Many of the controls are either voice or movement activated, looking up or down and to the side will all different effects on menus and displays. Promo videos show Google glass having features such as being able to peer out of a window and get updated weather forecasts and news relevant to a user’s location such as subway repairs, traffic delays and closed streets.

Sergey Brin founder of Google said  “ I never think about taking out my phone, that would be really disruptive to my play time”.

Another addition to the Google glass is the ability to play music which will allow users to listen to his or her favorite songs wirelessly. Another great feature is the social networking capabilities, such as being able to use Google hangout no matter a user is.  Even sitting at a bus stop, one can chat with his or her friends face to face privately without anyone else being able to sneak a peek at the session.

Developers also wants to add Google maps and the ability to add locations and even check in, there will also be a feature to find friends and calculate their distance from the location. Walking routes, with turn by turn direction will also be added and it is unclear whether the device is meant to be used while driving but early speculation rumors that it is not recommended.

College students will benefit from the technology because of its ability to allow them to multitask. They will never have to stop and check their phones while they are studying, because messages will pop right up in their line of sight.

Google offers to make consumers “less a slave to your device,” said Brin.

An issue every college student cares about is texting, and Google glass makes texting discreet and allows you to remain focused on reading or listening to lectures. No longer would students have to choose between walking to class and texting, a skill many can’t seem to master.

Beonka Young, a sophomore and psychology major is excited for the capabilities of the device, “ I think it would be cool, I’d be able to check my messages without it being so obvious.”

Developers have worked hard to show the public that the idea of a head mounted computer is in no way disruptive to daily activities by having BMX bikers, fashion designers, models, sky divers and even new moms test out the prototypes and post their videos on the Project Glass blog.

Monique Boamah, senior behavioral science major is concerned about how advances in technology are further isolating people from each other “ I feel that the more people are into their devices the less they communicate with the people around them, I feel it;s hard making friends when everyone is tethered to a machine.”

Project Glass still has a long way to go with developer models dropping in late 2013 and consumer models expected to be released in 2014. Even the prototypes are in their infancy with only having limited abilities such as taking photos and videos. Google has been very forthcoming with their information about Project Glass but they are being careful not to make promises they cannot keep.  Developers claim that there is much more they want this technology to do but they need time to be sure that it will come to fruition before getting the public too excited about it. Many critics of the project claim that this product is too advanced and will not catch on with mass consumers. Early models will require smart phones with mobile data plans in order to use many of the features. Developers are confident that future models will eventually be self-sufficient with their own wireless radios to access the internet.