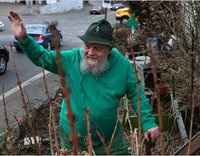 Many residents of Yonkers only knew this man by the nickname given to him over the years from whispers of people as they passed by his home.

The Leprechaun of Yonkers.

Little did they know he was actually Italian.

The man behind the affectionate nickname, Jess Buzzotto, passed away Sept. 20 peacefully at the age of 70. Buzzotto had become a legend in Yonkers and will never be forgotten by all that knew of him. Those who knew Jess personally say he was one of the happiest men around, waving at anyone who would stare awkwardly at him, not really knowing if he was apart of the garden or a real life man.

Driving by on Roberts Avenue one would always see his lively garden every holiday overly decorated; it was his pride and joy and he was overtly passionate when it came to maintaining the elaborate garden.

Many Mercy College students that hail from Yonkers knew of his passing and discussed it on campus.

“I remember leaving sacred heart school, and always seeing all his Christmas decorations everywhere, each holiday it was decorated,” says Molly Stazzone, a resident of Yonkers, and a junior at Mercy College majoring in Journalism.

St. Patrick’s Day was one of his favorite holiday’s to decorate. It was his holiday and the day everyone celebrated the luck of the Irish. Although Jess was not of Irish decent, he still embraced the day as his own. Decorations were all over the garden with  little leprechaun images and green was flowing from all corners.

Early in Jess’s life, he took on the role of the title given to him by many that regularly passed by. He spent his life as a resident of Yonkers, earning his a bachelor’s degree at Pace University, eventually working in Manhattan as a data base programmer.

Early in his life Jess was not the happiest of men. Self-admittedly, he spent most of his nights drinking heavily. He eventually quit and began to focus more on his gardening, which brought joy to him and gave new meaning to his life. For years he would hear the whispers behind him such as there goes the leprechaun from both adults and children alike, mocking him for his shortness.

But he embraced the criticism. Why wouldn’t he? Everyone would only continue to drive by honking and yelling out at him, each time he went out in his garden. So Jess took on the role of  “The Leprechaun” given to him, and he took it very seriously.

While tending to his elaborate garden, Jess would always wear all green from top to bottom, with a leprechaun hat, and a heavy white beard to top it all off. Given his short stature of only five feet, many who drove thought him to be part of the garden decor.

Hundreds of friends and family of Jess, showed up at his wake held this past weekend.

Mayor Mike Spano and City Council President Chuck Lesnick made an appearance to give a final farewell to the “Yonkers Leprechaun.”

Jess was buried in only his finest green shirt, pants, belts, and leprechaun hat, something he likely would have loved.

It will be a sad up coming holiday season for many residents of Yonkers, as they drive by his home on the corner of Roberts and Nepperhan Avenue and don’t see his friendly face in the garden; preparing his home with an abundance of lights and holiday decor, waving to all those who honked as they passed by.

“Driving up the hill won’t be the same anymore, no more flashy decor to watch, while you wait at the light, it’s actually going to be sad this Christmas,” says Monica Martinez a senior, majoring in Physical Therapy, who also lives in Yonkers.

“It’s like a piece of the town is gone.”