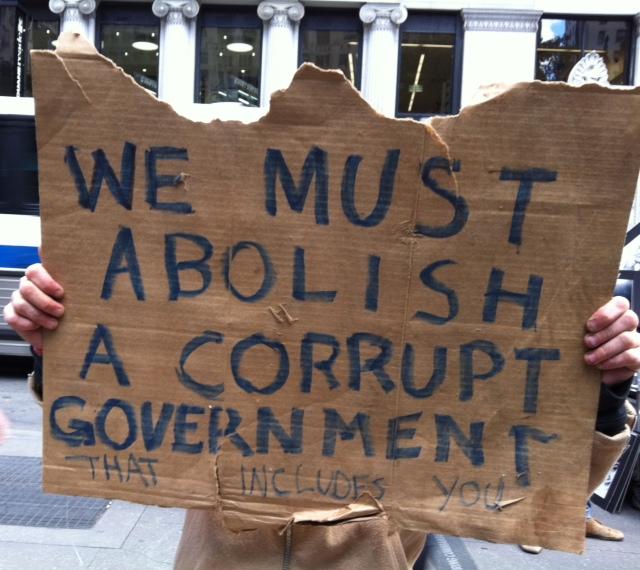 A year after Occupy Wall Street turned Zuccotti Park into a protest campsite visited by the likes of Kanye West and Susan Sarandon, Lower Manhattan’s Zuccotti Park seems to have gotten its figure back. No more colorful sleeping bags are clumped together in the chilly early morning hours, or soggy cardboard signs with clever slogans implicating the rich. No communal lunchtimes of cold macaroni salad and peanut butter and jelly sandwiches spread on top of long, wobbly cardboard tables.

Today, under the shadow of the slow-motion construction of One World Trade, tourists walk around Zuccotti Park snapping pictures, neighborhood locals walk their dogs and co-workers stand in line at hot dog vendors or halal carts, keeping an eye out for a table to open up. There isn’t one visible sign of the 99 percenters, nor of the protests and arrests that happened one week ago on the movement’s anniversary.

But just around the corner, a diehard band of about 20 people are lined up against the concrete wall in front of Trinity Church, all in various stages of ragtag discomfort on the hard sidewalk. A policewoman stands guard, expressionless, watching three men sitting on filthy cardboard, sharing whatever is for lunch out of a takeout aluminum container.

Out of another group sorting and folding a pile of less-than-new blankets, one man introduces himself, eager to tell a story.

His name is Chris Phillips. He’s 31 years old, and he identifies himself as a survivalist, a moniker he’s earned by sleeping on this New York sidewalk for the last 80 days, which he says has been “difficult, beautiful, and stressful.” At the same time, he laments that the movement will never be what it was in the beginning, when in its heyday offered free food, medical care, and even a lending library in its Twitter-driven micro-community.

Phillips plans on staying as long as it takes. As to the longevity of Occupy Wall Street, he says, “The movement has always been here. People were just not paying attention.”

In fact, the future of OWS seems to be headed in the direction of frequent, persistent protests, targeting those they feel have led to the ultimate corporate greed that the country is involved in today. Followers can stay up to date on the official OWS website, but their real heart beat is Twitter.

“The future of OWS is whatever makes it visible. Being out on the sidewalks like we are now, or in the courtroom after getting arrested. Chalk is a big part of it, too.”

As natural as discussing the weather, Phillips introduces the term “chalkupy,” a movement in which protest slogans or elaborate murals are drawn at target locations using simple but colorful sidewalk chalk.

And indeed, a quick Facebook search confirms calls for direct street action by creating “colorfully sloganed” sidewalks in cities like Oakland and Seattle.

Phillips’ favorite chalkupy slogan of the moment “Resistance is Fertile,” was washed away by the police hose that arrives every morning at 6 a.m. sharp to rouse the protesters from their sidewalk beds.

As Phillips chain smokes and recounts his arrest on the one-year anniversary gathering in Zuccotti Park on Sept. 17, or S17 as it is known in OWS jargon, his hands reveal a myriad of tattoos. A blue pyramid with an eye in the middle takes up all the real estate of the top of his right hand, and when he balls his fists up and places them side by side, his fingers spell out “Live Free,” with a letter tattooed above each knuckle in a faded blue Old English font.

While he was handing out sandwiches from his own personal cooler to sustain S17 protestors, the police cited him for a Health Code violation and demanded that he cease and desist. When he refused, they “wrongfully stole” his cooler and he was arrested for civil disobedience.

“I was in a police van with two priests and a bishop, and a 90-year-old woman in a wheelchair who was arrested for stopping traffic.”

Of his situation that sounds like the preface to a bad joke, Phillips says, “I was honored to be among them.”

And proud, too. He rummages through his bag and produces a New York Post with a photo of himself, lying stomach down on the ground and surrounded by four police officers, one of whom is securing his hands behind his back. Phillips’ head is lifted to emphasize a vein popping out of his forehead from the force of his protest scream.

The blogosphere is lit up with similar stories of unfair arrests on S17, with many claiming they were arrested for inane reasons like blocking sidewalk traffic, and almost all speak of the solidarity and friendship waiting for them when they got out. On her blog, Molly Crabapple says that upon her release, “friends were waiting with hugs, pizza and the National Lawyers Guild.”

As Phillips discusses the future of Occupy Wall Street, his speech is peppered with ridicule of the “wealthy elite,” as well as social and financial inequality. And in fact, the Occupiers on this tiny block near Wall St. seem to be practicing what they preach.

Several members of the group interrupt Phillips to ask where the extra coats are or if there are any sandwiches left (sandwiches are salvaged nightly from nearby Duane Reade’s expired discards).

One man drops an iPad in his lap saying, “It’s your turn with it.”

A young man wanders over in search of a cigarette and introduces himself as Jorge Lugo, age 22. Lugo traveled to New York to celebrate the movement’s one-year anniversary and was so inspired by S17 that he never went home.

“People are giving up a lot to be here,” said Lugo. “I have to be a part of this.” So much so that he quit his construction job back in Houston saying, “I can always find another job. There’s only one chance to be a part of something this big.”

Phillips also gave something up when he came to New York from the Occupy Buffalo movement in upstate New York, which he claims he started. He quit school to be a part of New York’s OWS scene.

“When all is said and done, people will be glad we stayed.”