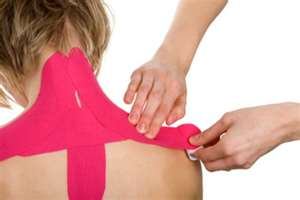 The tape was developed back in 1979 by Japanese chiropractor Kenzo Kase. Kinesiology tape has been popular with professional athletes in Japan since 1988 and is gaining popularity in the United States. The majority of the American public was introduced to the tape in 2008 during the Beijing Olympics and again in the London Olympic Games when scantily clad female volleyball players wore the tape in bright colors. The tape was also popular during the games for other sports from track to ping pong.

The popularity of the tape has seen a steady climb in use and can even be seen on many college athletes such as basketball players during the NCAA championship. The tape claims to have great benefits such as preventing injury by protecting muscles and increasing the range of motion. The product is used on athletes who are treating an injury to rehabilitate muscles and joints and boasts the ability to heal fast and manage pain, allowing athletes to continue playing at their best while nursing a sprain or other minor injury.

Kinesiology tape is constructed with cotton fibers and medical grade acrylic adhesive. The tape has a lifting effect said to reduce lactic acid build up and increase blood flow to the area. The tape can be for worn for 3-5 days after placement. The thin but durable material allows for a wide range of movement without any restriction or peeling.  The tape is also being used by chiropractors, physical and occupational therapists around the country that have been trained in the technique known as “taping” and they are reporting success and progress in their patients.

Many claim the success of the tape is not only in the design of the tape but the actual technique in which the tape is placed on the muscles that makes all the difference.  As the popularity of the tape continues to rise many experts are calling foul and pointing out that there is no scientific evidence to support the claims made by practitioners. Researches claim that what athletes are experiencing is a phenomenon known as the placebo effect.

“My view is that Kinesio tape probably has a significant placebo effect,” says Phillip Newton, physiotherapist.

Dr. Nicholas Fletcher agrees stating,  “I think, if anything, there is a placebo effect involved, and there probably is a little bit of a peer pressure effect. When people see athletes who are doing so well, they think, ‘Maybe this could work for me.”

Skeptics also argue that many athletes wear the tape as more of a fashion accessory then a injury prevention device.   The Journal of Orthopedic & Sports Physical Therapy published a research report that compared the effects of Kinesio tape, athletic tape and no tape on 51 males with an ankle sprain. The study concluded that the Kinesio tape had no effect on muscle activation.  Experts that do express skepticism do not recommend discontinuing use of Kinesio tape because it poses no risk to the individual’s health and that if they believe it is helping they should continue to use it while also being aware of the facts.