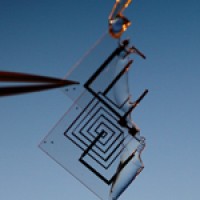 Ever wanted to be like the six million dollar man? Well, while medical science isn’t quite there yet, electronic devices implanted beneath the skin just became a whole lot more practical.

Electronics implanted in the body is not a new concept with medical breakthroughs such as pacemakers and insulin pumps. However, a new technological development aims to change biomedical engineering, by way of electronic chips that are capable of dissolving within the human body.

Having a device completely dissolve within the human body eliminates the need for surgical removal. These disappearing devices were developed by research teams at Northwestern University and University of Illinois.

Dr. John Rogers of the University of Illinois is the lead researcher on the project; his team has successfully implanted the” physically transient” chips into mice. The ability for a computer chip to function while also being able to dissolve requires unconventional materials.

“I’m a material scientist, so I’m interested in new materials for electronics and we are interested in developing those materials to enable a future in electronics that you cannot achieve with conventional silicon wafer based technologies,” says Rogers.

The chip is encased in a cocoon of silk, which houses the silicon and magnesium components. The use of silk came from the years of research of durability of spider silk that scientists have been working on a way to incorporate into scientific use for years. The silicon was specially designed in Roger’s lab.

“We make silicon thin to make it flexible and that flexibility is just an elementary principle in bending mechanics,” Rogers said.

The diameter of the chip is essential to its ability to fully dissolve. The power source of the chip comes from non-toxic induction cells. The chip’s solubility will be relative to the thickness of the outer capsule of silk. Researchers have been able to create prototypes with the ability to last between two and six months.

The applications for this type of technology are endless and some of plans of researcher are confidential. The devices are designed with the intention of being reprogrammed for many different functions.

The first prototype is designed to sense bacteria and use heat to kill pathogens. This technique may be an efficient aid to combating infections following a surgical procedure. The devices medication release feature could be a solution to those who cannot remember or refuse to take medication regularly. The electric currents produced by the device can even promote bone healing.

An interesting possibility is the implication it may have on government intelligence, and other non-medical solutions like monitoring pollutants without creating electronic waste. The idea of dissolving devices may even be the key to completely eliminating electronic wastes in all areas of technology.

Christopher Bettinger of Carnegie Mellon University, a researcher who works on biodegradable electronics, is excited for the green implications of such a technology and calls it “a remarkable achievement.”

Opinions on this technology are mixed; some are not comfortable with the idea of having an electronic device in their bodies while others embrace the idea.

“I would be okay with the implantation of the device if it was essential to promoting better health.” said Tanita Hendley, senior, health science major. “It would have to be absolutely essential and I would need to be sure there were no risks or side effects,” she continued.

Kimberly Jones, a mother with child possessing a mental illness, is excited for the possibility of being sure that her child has taken their medication.

“It would eliminate a lot of stress from my daily routine; I would no longer be worried about if my child had taken their medication.”