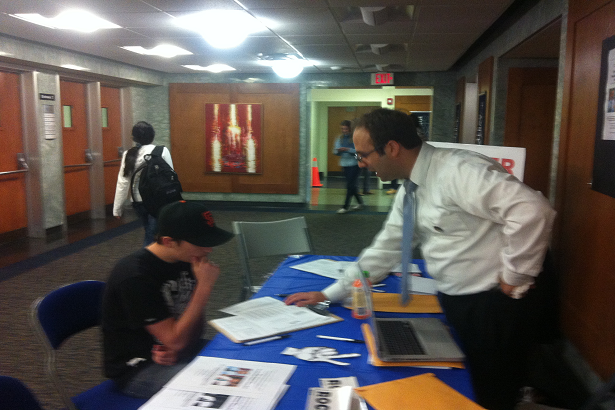 “For students, making a decision on who to vote for truly effects their futures, and it should be taken seriously because voting is a privilege that we as Americans take for granted every four years,” said Klein.

He added, “Registering to vote is easier than a trip to the DMV.

By the end of the day, there were 120 people who registered to vote, with locations in Westchester, the Bronx and Manhattan. Klein said, “While running a registration drive you, have to learn how to be non-partisian when some people come up to register and talk about their beliefs. You just have to nod your head and smile.”

And did the students ever have their opinions on the upcoming election.

Rob Murphy, a sophomore, said, “Based on society and the country today, it is very important that students realize Mitt Romney is the best candidate, because he has been looking like the strongest candidate in the debates and in the polls.”

Where as Caress Pascab, also a sophomore at Mercy, said “By voting, I feel it will give me a better future for change. After watching the debates, President Obama is the best candidate because he sounds smart and he still has a lot left to do.”

After seeing the debates, a lot of the students have either changed their minds or have decided between the two candidates. Pamela Dos Santos, a junior, said, “Based on watching the debates, Gov. Romney looks like the stronger candidate and may win.”

Mercy also has students who are not voting at all because they feel the politicians are dancing around the issues.

Amanda Camerino, a sophomore, says, “I’m not voting in this election because I feel as if both President Obama and Governor Romney are more focused on attacking each other and fighting for their political power for the position of president, rather than fighting for what’s right for this country. The only thing I agree with them on is mass murder of gun control within the people. They need to be taken away rather than being used for violence, because it takes something drastic to happen for the country to react.”

She adds, “As for  and the immigration policy, they both say “‘welcome to the paradise countr’ but clearly they don’t see that their taking our jobs as well. I have nothing against immigration, but it’s the truth. Education and schools need to be focused on as well.”

It a successful registration drive, with more than 100 students registered to vote. Dr. Klein did what he set out to do and that is get people voting. Their voices will be heard on election day, Nov. 6, when they pick the candidate they think is best for president.

There are really so many diverse feelings and views on this election, and to some, the issues are really personal. This presidential election is important to almost everyone and the outcome will satisfy a lot of people and it will also disapoint a lot of people.