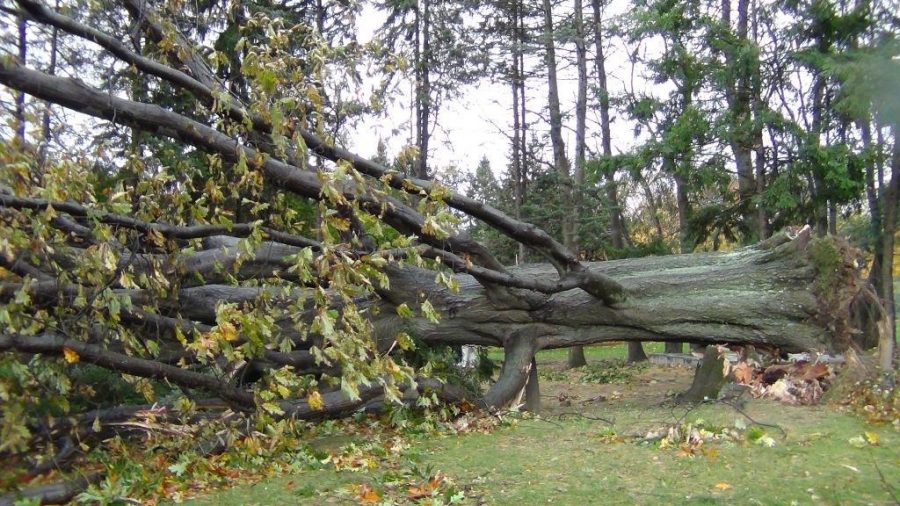 Hurricane Sandy has come and left the metropolitan NYC in a wake of destruction. Families have been displaced and thousands are still dealing with power outage problems as local utilities struggle to restore service while temperatures begin to hover at or below freezing temperatures overnight barely reaching the high forties during the day.

The Mercy College community was not immune to the effects of Sandy, with power outages spread sporadically throughout campus along with suspended bus and rail services conspiring to shut classes down for an entire week.

“Aside from the huge tree that fell over across from Main Hall, the only other real physical events were many missing college banners around the campus.”

Trefffiletti said that the campus began planning for the impending bad weather a week before it actually hit. A contingency plan was put together that included daily meetings with other campus agencies to discuss everything from security, to taking in any items that could be blown around such as furniture and plants, along with ensuring back up generators were fully operational if needed.

“There were even a couple of my staff that stayed on campus and slept in their offices to make sure someone would be here to deal with any and all situations; and they had families of their own.”

Though the college has a large commuter student population, there still are a significant number of students that reside both on campus and at local contracted hotels as an extension to the dormitories.

Fortunately, students that stayed in the dormitories and hotels through Sandy’s rage fared pretty well with only minor inconveniences. However that does not mean that some students did not have some points of contention regarding the handling of operations by the college.

Jessica Gooden, is a 19 year old Mercy College sophomore health science major. Gooden resides at one of the contracted hotels for students off campus. She was there through Hurricane Sandy and reflected back on her experience about how the college dealt with taking care of students in her situation. Gooden says that while the school did an adequate job of taking care of basic needs, she wanted to offer a bit of her personal feedback

“I feel that they (school administration) did what they had to do but nothing extra to help the students.”

Gooden was mostly disappointed with the menu choices during the worst three days of the storm which amounted to bologna/ham sandwiches with water, granola bars and chips.

“Thank God for the local Chinese restaurants that were open and even delivered to us.” Gooden said with a playful sigh. She did acknowledge that at least an effort was made to take care of the hotel bound students throughout the weather emergency and is thankful for that.

Along with Gooden, Dimosthenis Triantafyllou (he says just call him Dimo!) a 22 year old exchange student from Greece, expressed how he dealt with being in the dorms throughout Sandy and had some input to express.

Dimo started here at Mercy this semester and this is his first time in the United States. He had never been in a hurricane and where he comes from, earthquakes tend to be more of a prominent act of mother nature that he contends with. He was not nervous initially about the impending hurricane stories because the campus dorms are up on a hill, and the brick construction of the building helped to feel a measure of security.

However as the storm moved in closer things begun to change.

“The media coverage was so intense that I started to become worried. I even went out and bought a few things…. just in case. I then begun to feel things would be ok again because I was prepared more.”

Things did turn out ok. Dimo says other than the flickering of power along with the high winds and rain hitting the windows, things were not so bad. Ironically it was not mother nature that got the best of Dimo; it was human nature.

“I could hear all the sirens and emergency vehicles racing around and it was the most scary part of everything. I felt like I was in some kind of a war zone!”

Dimo said that through this experience, the dorm staff handled things well and were comforting to him because they remained clam and did not panic through out everything. Though he said that it would have been nice if college administration had more of a face presence in the lead up to the weather event.

“They knew the storm was coming for days prior to it hitting and I did not feel the school did much in that time to reach out to dorm residents that were staying on campus.”