The Shortage of Gasoline after Hurricane Sandy 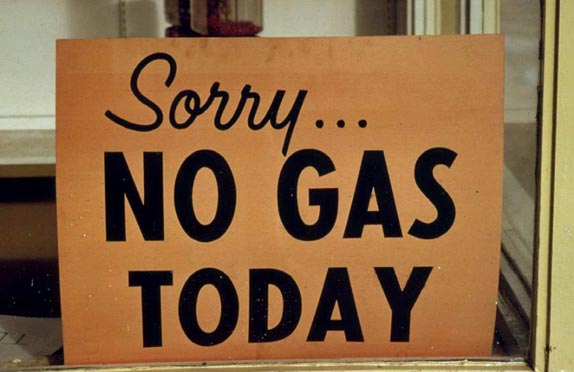 On the night of Monday October 29, 2012, the Tri-State area was hit with its worst storm. This storm caused devastation for millions of people. Hundreds of thousands of people in New Jersey (especially the Jersey shore), New York (especially Staten Island and lower Manhattan) and Connecticut had damage to their homes and were without power.  Even the people were lucky enough to have no damage to their homes and nor lose any power found themselves with another significant problem affecting everyone – getting gasoline.  There are gas shortages resulting from disruption of the distribution of gas and many gas stations not having power for their pumps.

I remembered my parents’ stories about their experiences with the gas shortages during the oil crisis of 1973 caused by the Arab oil embargo. Gas was extremely hard to come by and the gas shortage now is the nation’s largest since then. In the 70’s people were waiting on extra long lines at gas stations and when many people got up to the pump there was no gas left at the station because that station gave out the last bit they had. The same thing is going on today and people thought that it would never happen again. We see that history surely does repeat itself. For me, a college student, who never thought of something like this happening could not believe the length of the lines when you drove around from one gas station to another. I saw lines backed up for over a mile and people that I spoke to were waiting in those lines for over two hours because it did not make sense for them to drive around to another gas station in hope of the line there being shorter because you would waste gas in the process.

Not only are there shortages, but also the prices have increased. These days gas is up to $4.59 a gallon for regular gas. Each time one of my parents fill up their car they spend $45 and that is just for a small tank with regular gasoline. It cost $60 to fill my grandmother’s car because she has a larger tank. People, who drive SUV’s that may have lower miles-per gallon efficiency, pay over $100 and they usually have to fill up twice a week, of course depending on their usage. This is a large amount of money people are spending on their cars and that is why more people are taking public transportation because they are trying to save some money. But riding the bus or subway is not cheap either with the new announcement of the increase in the metro card fare prices, which keep getting raised. Getting around places has become very costly and this is hard on families of people who have been laid off from work due to the bad economy.

The new gas rationing laws for New York City and New Jersey is that people with license plates that end in an odd number, a character or a letter can only get gas on odd number days and people with license plates that end in even numbers can only get gas on even number days. This is to prevent long lines at gas stations. Westchester County though does not have this law and people can get gas like they always have been. But thousands of people drive to work and some have long commutes and taking public transportation simply takes too long and they will never make it to their jobs on time unless they drive. Mayor Michael Bloomberg said, “There’s no guarantee that odd-even is going to make a big difference.” This law also will put a big inconvenience on people if they cannot get to a gas station on their certain day.

People are bringing their own gasoline containers to gas stations to fill up so that when they run of gas they can just add more in their car from their own containers.  They will not have to worry about hurrying to a gas station that turns out to be dry, or if it is not their day to get gas on the odd-even system. In my area I have seen plenty of people who have gotten out of their cars and have stood on a line with their gas containers waiting to fill them up. I recently heard of a website that helps people find gas stations in their area that have lower gas prices by typing in your city, state or zip code. You can visit the website at www.gasbuddy.com and this site might actually help you save money on gas when you go to the places in your area that this website lists.

There are just so many people getting very frustrated and people don’t know what to do. What has caused the gas shortages? The problem is not gasoline supplies, but rather the ability to distribute the gas because of the destruction from Hurricane Sandy. Also, some gas stations cannot pump due to power outages. The shortage of gasoline as experts warn could persist for another couple of weeks as crews scramble to repair the damage that has occurred all over from superstorm Sandy. Now, people are scared of anytime there are bad weather conditions. When people heard of a nor’easter storm heading our way just a week after Sandy, thousands got worried because many of them were not even done cleaning up from the huge mess Sandy brought. But thank God the nor’easter was only a snowstorm that was mostly cleaned up by morning.

Even when power is restored and damages are repaired, the region’s gasoline-distribution system will not be any less defenseless to such an event. Some of the potential solutions could be costly, politically unfeasible, or both. These are some of the things I was reading about that were being discussed in hopes to bring in more gas. The first solution I read about is to build a system of gasoline pipelines to deliver gas to stations and do away with the need for trucks to supply gas. Next, putting more hybrid cars, and electric cars with longer battery life, on the road could curb gasoline demand. Also, higher gasoline prices could make it more profitable for refineries to operate on the East Coast, which would mean more refineries and this would mean more gasoline supply in the event of an emergency. Last, make every gas station own a generator in case their power goes off. That idea sounds good in theory, assuming gas stations could power their operations but a typical gas station might not be able to afford $25,000 generator to keep the gas flowing in an emergency. Even with those good ideas that I was reading about online; there will probably not be change as rapidly as thousands of us hope.

For now, we need to save the gas we do have even if that means having to travel a little less or take mass transit until things return back to normal. No one knows for sure when things will return back to normal or, if and when, the next crisis will occur. It is all a matter of waiting it out and now that I am seeing more and more people each day recovering from the horrible damage from Sandy and they are getting their power back, hopefully the shortage of gas will not last too long either. The economy is already bad and now, with gas being hard to get and the upcoming fiscal cliff, people are hoping for change and improvement in their lives, including help from President Obama, the Federal government including FEMA and state and local governments. There are many challenging ahead in the upcoming months and years and hopefully President Obama’s leadership will make a difference.