Back To Back Storms: Hurricane and Nor’easter Hit Westchester 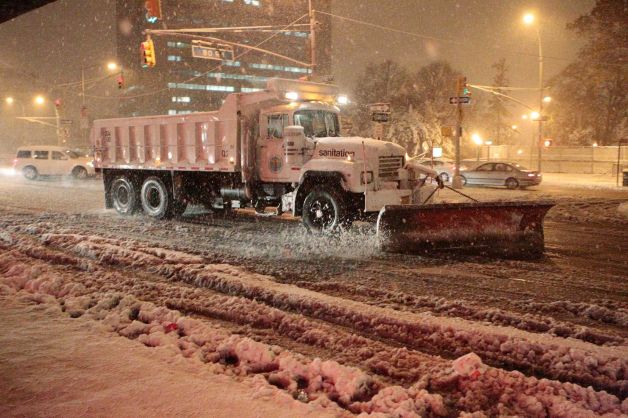 As if “Super storm Sandy” wasn’t enough for New York and New Jersey, a nor’easter snow storm hit on  Nov. 7 and went into Thursday Nov. 8.

This storm hit all of Westchester, including The Rivertowns (Dobbs Ferry, Hastings, Ardsley, and Sleepy Hollow) only a week after Hurricane Sandy. It began early Wednesday afternoon with a mix of rain and snow with increasing winds. This nor’easter gave Westchester between 1 to 3 inches of snowfall in 2 days.

“I was expecting a small snow storm to just pass by. I definitely didn’t expect what we got instead. The amount of snow in such a short time was crazy,” said Joey Maldonado, Mercy College senior and Criminal Justice major.

Hurricane Sandy left hundreds without power, and heat for days; this snow storm was no assistance in helping citizens get back on their feet. The snow storm left a thick blanket of snow which caused power lines and trees to snap. With roads already have been closed and trees that had fallen down due to Sandy, this snow was no help to the Westchester area.

Westchester residents adventured to their local grocery store to stock up, once again, before the nor’easter storm hit.

“People were still trying to get their lives in order from the destruction, two big storms back to back definitely put people in a panic,” said Maldonado.

Thankfully, Mercy College’s Dobbs Ferry campus regained power a few days after Sandy hit and was not negatively affected by the nor’easter snow storm. However, some classes were cancelled and  a numerous amount of Mercy College students depend on the train for transportation to get to campus. Public transportation was greatly affected with the aftermath of both Sandy and the Nor’easter.

These back to back storms also have had a huge impact on the companies responsible in getting the county back on their feet.

Cablevision, Verizon and AT&T, among others, said they will give various discounts to customers in storm-affected areas.

Also, with the hurricane and nor’easter storms affecting public transportation, MTA was out of service for a few days. While people were wondering about refunds for their MetroCards, MTA said no way.

“It was really hard and stressful those two weeks making sure everybody was getting their heat and power back, I was working double over time. It’s like once people did get power back after the hurricane; they lost it again due to the snow. But of course it’s all worth it, that’s what the job is about, helping people and that’s exactly what I feel like we did,” said Jason Smith, Technician for Cablevision.