Power Of Thought Being Studied By BCI 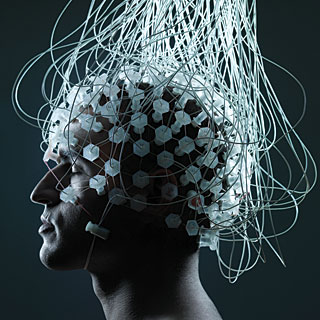 The brain computer interface is technology that allows the user to communicate with a computer without input devices like keyboards, a mouse or voice control. Neural activity produces neural oscillation which is a repetitive pattern that transmits electric fields into the atmosphere. The BCI uses electrodes that gather the neural oscillations and transfers them to an amplifier which amplifies the signals before transferring them for processing in the CPU which then sends out the signals to the external stimulator which will promote device action. This kind of technology has endless possibilities such as being able to replace lost limbs with a robotic prosthetics that contains a BCI interface allowing the user to control the limb like it was their own. The technology does not seek to become a mind reading device but rather aims to offer a new way to translate thoughts. In short the software only works in one direction; it can only receive input from the brain but cannot access or interfere with a person’s conscious mind.

Like any scientific breakthrough the success of this technology depended on the research and findings of others whom were unable to continue their work due to the limitations of their time. Such is true with Hans Berger’s 1929 invention of the electroencephalogram a piece of equipment that is used to record the electrical activity in the brain. In 1970 a research team at University of California had begun studying the idea of BCI. The pentagon was interested in utilizing the technology for combat to improve solider performance and the research team was put under contract by the Defense Advanced Research Projects Agency. Progression remained slow with the first prototypes only being able to form primitive control systems. In 1977, Jacques Vidal’s research became a major breakthrough when his findings suggested it is possible for a subject to lead a cursor through a two dimensional maze using vision-evoked action potentials. Modern researchers were able to have the luxury of using more sophisticated imaging techniques like MRI’s and Han’s Berger’s electroencephalogram which allowed them to take the system further than it had ever gone. In 2003, Dr. Gary Birch who is a quadriplegic, along with S.G. Mason, created a universal framework that could be used to create other BCI technologies.

Medical uses for BCI technology are primarily for those with physical, mental disabilities or those who have lost the ability to speak. The technology can aid with communication, mobility and other daily activities. Currently BCI technology is still being tested for use in clinical trials and many researchers have hopes that this may be helpful for people with autism to aid in communication. Loss of independence due to impaired mobility can be solved with BCI technology incorporated into wheelchairs allowing for complete control by the user. More invasive procedures can create even more dramatic effects on people with disability such as the cause with Jans Nuamann, a blind man who underwent major experimental brain surgery to have a BCI- based technology implanted into his brain, and is known as the first person to have a working artificial vision system. In 2004, a device was implanted into the motor cortex of Matt Nagle, a tetraplegic. The implant allowed Nagle to control the cursor on a computer and control a prosthetic hand using only his thoughts.

In an interview with an ethics magazine, Nagle said, “I can’t put it into words. It’s just… I use my brain. I just thought it. I said, “Cursor go up to the top right.” And it did, and now I can control it all over the screen. It will give me a sense of independence.”

These invasive procedures are not without risk and controversy, many of them are banned and Mr. Nagle had been forced to remove his implant, due to FDA regulations.

The technology can also have more trivial implications like in toys and games. These inexpensive BCI devices have come somewhat of a novelty due to a company called Neurosky, which has worked with Mattel to create Mindflex, a game that uses BCI to guide a ball through a maze using a EEG headset that controls a fan that pushes a ball around the maze.

The final implication of this type of technology has the potential to change lives in ways we have yet to imagine. Remember, science fiction is just a technology that hasn’t been invented yet.