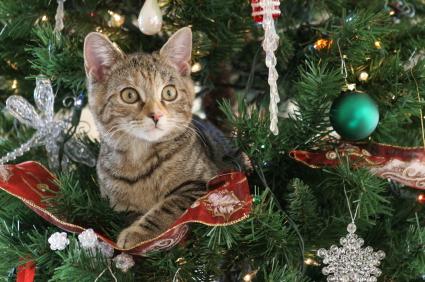 Holiday decorations are a great way to start of the holiday spirit. Unfortunately, many of the decorations people use to decorate their households can be harmful to pets, such as holiday plants. Some of these plants include mistletoe, poinsettias, and lilly’s. Mistletoe can be very toxic to your pet. Many dogs and cats think it’s a good object to play with. Unfortunately, if it’s ingested it can cause vomiting, diarrhea, and heart issues. In addition, poinsettias are a popular holiday plant that animals tend to ingest. Poinsettias usually cause mild symptoms, such as vomiting and diarrhea in dogs and cats. However, if it’s ingested in large amounts it can cause seizures, collapse, and even death. Also, lilly’s are usually present during the holiday season. These types of plants can cause kidney failure in both dogs and cats if it’s ingested, Especially in cats. There are many “pet-safe plants” that can be used during the holidays, instead of the plants listed above, to avoid any harm to your companion. Furthermore, if any of these plants are ingested by a dog or a cat, it’s always safe to call a veterinarian so the symptoms don’t persist and to avoid and critical situations.

Everyone that celebrates the Christmas holiday usually have a Christmas tree standing in their household. It’s always good to check to see if the tree is standing up steady and locked into the stand. There have been many instances where animals try and pick the ornaments of the tree and then the tree collapses on them. It’s best to keep any animals away from the Christmas tree. Household pets, especially dogs, decide to drink the water from the tree instead from their own water dish. Drinking water from the tree can cause vomiting and diarrhea in your pet since bacteria develops in the tree water. Also, many individuals add a solution to their tree water to keep the tree healthy and fresh. In this case, it’s best to keep your animal far away from the tree since it can cause harm to the animal.

Now, onto the ornaments. Many dogs and cats think the ornaments are toys for them to play with. Many individuals use tinsel to decorate for the holiday season. Tinsel can cause obstruction of the digestive tract if it’s ingested and cause dehydration. If an obstruction occurs, surgery will have to be performed by a veterinarian. Usually the pet will show symptoms, such as vomiting and diarrhea. This also goes for any other ornaments that are hanging on the tree. If any of these symptoms occur or if the animal was seen ingesting these objects, it’s best to contact a veterinarian.

Keep any loose wires away from your pet. Wires, such as the ones from Christmas lights, can cause electrical shock if your pet bites into it. In addition, it can cause severe burns to the animals mouth and esophagus.

Of course, table food is something that’s needs to be away from your dog and/or cat during the holidays, as well as alcoholic beverages. Foods, such as bones from meat, grapes, raisins, macadamia nuts, sweets, chocolate, garlic, onions, and many more. All of these foods listed above can cause gastrointestinal upset. For specific symptoms, take a look at the holiday food article.

During this time of year, there are many other objects laying around the household including ribbons, strings, and yarn. Animals, especially cats, think of these objects as toys. A large amount of pets are brought into the animal hospitals around this time of year due to ingesting foreign objects. Many of these situations result in intestinal blockages. In fact, my cousin Barbara Combs had a two year old pit bull/lab mix named Buddy, that had a situation like this. Buddy ingested a ribbon that was made into a bow and had a metallic wire connected to it. He ate a large piece of it. Approximately the day after the ribbon was ingested, Buddy showed symptoms of vomiting, black diarrhea, lethargy, and loss of appetite.

According to Combs, “He was not being himself. He was at the point where he was growling at the kids. It was not something that was going to pass.”

In addition, the ribbon was hanging out of Buddy’s rectum. That’s when Barbara knew that something was wrong. She then drove him to the animal hospital. When they saw the veterinarian they did not receive good news.

“The veterinarian said that the prognosis was poor and he would probably not make it through the surgery,” said Combs.

Barbara had no words. She froze.

“The metallic wire was destroying the organs and they would basically have to take out his intestines,” Combs explained.

Since the situation became so severe, Buddy was euthanized during that visit since the prognosis was so poor.

Things can change in a split of a second. That’s why it’s best to keep any decorations away from your pet. Unfortunately, it’s hard not to sometimes. If your companion is the type that likes to be adventurous and ingest these things, then it might be best to bring your companion to a boarding facility during the holidays. This is for their own safety. If not, it would be good to exercise them before the festivities begin and give them their own toys to play with. Also, keeping them in a separate room can help. If any problems arise, please contact your local veterinarian with any questions or concerns. Have a safe and happy holiday everyone!