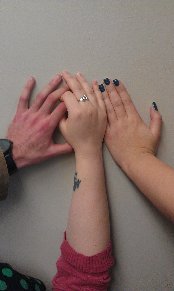 There is nothing out of the ordinary about that for 30 year old Mercy College media film culture senior Kate Beaman-Martinez. She does not have four ears, tentacles, or even antlers. She is just working hard to finish her college education and move on to the next challenge – her career.

However at times just like everyone, there are aspects about her that may seem complex. Her passion for knitting,  interest in the gaming community, and love of sci-fi adventure novels would seem to be odd. at least to someone on the out looking in.

But for Martinez, people should not be defined by their gender or social views. Its all about personal empowerment, and everyone should express themselves in the way that they feel most comfortable.

It’s a typical evening during the week. Martinez finishes classes for the day and heads home. Her boyfriend works in Manhattan and commutes in and out of the city daily by train. When he arrives home in the evening, 46 year old Vinny comes over to the waiting car with Kate in it.

She gives him a kiss, and as usual, he is pretty worn from his long day. As they leave the station headed for home, Kate compassionately asks Vinny how his day was, and he shares with her the highlights about his day’s experiences.

They live in a two family house where Vinny’s father resides on the second floor. Once there, they kiss goodbye and Vinny heads up stairs to his dads.

“He has a room up there and he goes to check in with his dad and change out of his work clothes. It is part of his winding down from the day process,” says Martinez, and she respects that.

After a while, Vinny comes back down to their place, fixes a snack and then settles down in front of the television for a bit of relaxation.

Soon the time comes for Martinez to make a return trip to the train station just as she did with Vinny a couple hours prior. This time, it will be Avie that comes to the car; a gentle kiss hello, followed by talk of how their days went.

Avie, 34, also works in Manhattan. In fact, she works at the same company that Vinny does, however they work in different areas. The conversation on the ride home between Kate and Avie takes on a different dynamic than with Vinny.

“Avie and I tend to have more conversation on the ride home because of our personalities. It’s not just because we are women. We don’t connect simply because of that.”

As the two of them get home, Avie has a ritual just like Vinny; she heads straight to the ladies room. Afterwards, she comes out to meet Vinny with a kiss and the two of them have their time to chat.

“Since the two of them work together indirectly, they know a lot of the same people so the conversation usually is centered on things that have gone on at their workplace. I just usually sit back and listen.”

At some point Martinez and Avie decide to have something to eat for dinner and head off to the kitchen to prepare something. Though Vinny has typically eaten by this time, he still sits with them while they have dinner and all three discuss what to watch on television for the evening.

By 10 p.m., everyone is ready to head to bed. Just like the rest of their day, there is usually a routine that they each have separately and do together.

“First, we go through a dance with the cats to make sure they are out of the bedroom. One of them however has a heart murmur and a thyroid problem that requires special care. After we have ensured she has had her medication, we do our own personal rituals berfore bed,” says Martinez.

Vinny is usually in bed first because he likes to read before he falls to sleep, so he does it while he lays there. Avie is usually next.  After what Martinez says is her normal thing of “puttering around” she climbs in last.

They sleep in a king size bed. Avie and Vinny will normally snuggle at night but Martinez tends to flip around so she needs her space. But she does like to reach out and gently touch in some way to maintain a connection between them. Vinny usually sleeps in the middle and Martinez and Avie sleep on the ends.

For the three of them, this is a typical night. But with any relationship there are practices that define it, boundaries, both emotional and physically that are set, and with challenges that must be overcome.

What Martinez, Avie and Vinny live is a polyamorous relationship. By definition, it is the state or practice of having more than one open relationship at a time. Not to be confused with polygamy, which is having more than one wife or husband at a time, polyamorous relationships are not illegal. The time when there could be a moral issue is when all parties involved are not aware that someone whom they are seeing has another partner.

In other words, cheating. But not in this relationship. All parties involved are with “the other man or woman.”

For them, this means that no one (of the three of them) has relations either physically or mentally with another person. But here is where it gets tricky; if either of them were to express an interest in someone else outside their relationship, it would have to be “seriously discussed,” said Martinez.

“We have been in a committed relationship for close to 10 years.  I came to the relationship after Vinny and Avie had been involved since 1998. We have never cheated on each other or had a fourth person the entire time. It’s not something that we ever completely ruled out, it’s just that we love each other and feel content with what we have,” says Martinez.

With that being said however, it brings up the question of sexuality and how it is defined and operates within their relationship.

Vinny defines himself as a completely heterosexual male. He has no sexual interest in men whatsoever. On the other hand, Martinez and Avie are less stringent when it comes to sexual encounters with a partner so they tend to identify with being bisexual, says Martinez.

“In our relationship, if it ever came up that another person was to actually be introduced, it would have to be female. Vinny is just is not into other men even remotely. So if I or Avie did express interest in someone else, it would be a problem if it was a male,” Martinez says.

Whether or not this seems to be an unfair statute to someone outside looking in, Martinez and her partners don’t care. It is what the three of them agree on without any reservation or angst.

When it comes to sex, everyone has their own pattern of preferences. Frequency, time of day and the normal rigors of life can be a challenge between just two people. But as with most things regarding their relationship, Martinez, Avie and Vinny have understandings between them.

“Sometimes I might not be in the mood and they are. If it happens that the two of them have sex and I’m not there or vice versa…or vice versa…jealousy about it is has never been an issue… for none of us. There have been times when the two of them have woken up in the middle of night and carried on. I usually just sleep right through it and find out about it in the morning…or some later time…I‘m totally cool with that,” Martinez says.

“The only rule that we have is that no matter what, everyone is welcome.”

Sex between the three of them is more sensual in nature, involving the types gentle touching and caressing that people do when they are in love. There has never been a problem with anyone feeling left out or ignored. Interestingly enough, the three of them have only shared in penetrative sex two times since Martinez has been a partner. Martinez goes on to say that despite this “Everyone is mutually satisfied in other ways.”

Despite the fact that the three of them have come to terms with a satisfying sexual relationship, it goes without saying that sex is only part of the equation for long term success and compatibility. Martinez says that they have fights and disagreements just like in any relationship. Sometimes it is between them all, sometimes between only two of them.

In all instances, they work to not let hostilities get out of control. If it seems that two are taking sides against one regarding an issue it can be doubly frustrating, but that does not happen much. Usually the one outside the conflict stays out of what is happening, says Martinez.

Martinez admits that she has had to deal with (and is still working on it) a slight problem of jealousy. She says that Vinny and Avie are like “two sides to a coin.” Since their work is a big part of life that they share, they often talk about it. Martinez feels that it is something that she is not included in and it could cause resentment on her part.

“I know it’s not fair to them…to us…but it is something that I am working to get past.”

Being involved in a polyamorous relationship has many challenges and complexities. Some Mercy College students  feel that there are challenges which make it impossible to do successfully.

Gio Lassaladra, is a 19 year old criminal justice sophomore, is not so sure about the sustainability of a polyamorous relationship.

“I don’t believe that it could work. I mean someone is always at some point going to get jealous and I think it would just end up being more hassle that its worth.”

Another 19 year old, Steve Longo, a sports management freshman, shares a similar view but brings up another point.

“My mom would be totally upset if I were to tell her I was in involved with two girls. Course my dad would be like, way to go! But when it comes down to it, I can barely handle one girl!”

Though these two young men are in agreement that for them, a polyamorous relationship has difficulties that are just not worth it let alone the practical logistics of balancing two partners.

One young lady has similar views for herself in regard to a polyamorous relationship that echoes  Lassaladra and Longo, but feels that provided one thing is in place, it could work.

Jessica Burnett is a 21 year old graphic design major. She says her parents are very reserved but are generally open and accepting people.

“My best friend is gay, but my parents are very supportive and accepting of it. I believe that if I came to them saying that I was in a committed relationship with more than one person, they would be ok with it if that was what I wanted. For me, one boyfriend is enough, but I think a multi-partner relationship would work if they had communication”

In the case of Martinez and her partners, Avie and Vinny, having a polyamorous relationship has thus far been a successful thing because it has been communicative and defined by terms that they all agree on.

When asked where she envisions her relationship going in the future, Martinez smiles and pauses a moment.

“Well, we have been talking about having a symbolic marriage. Maybe sometime in the near future.”