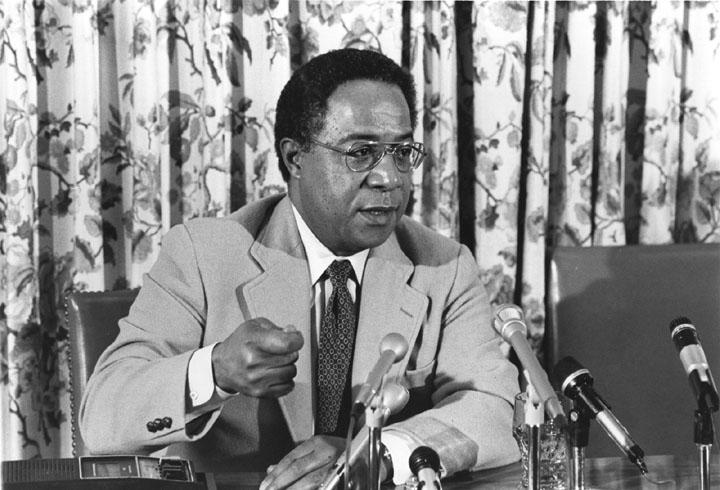 “Find the good and praise it,” U.S. Sen. Lamar Alexander said at President Barack Obama’s swearing-in ceremony last month.  Alexander was quoting American author Alex Haley, and referring to the peaceful, orderly reaffirmation of the American presidency, praising the nation for the freedom to vote and our respect for the outcome.

When I heard Alex Haley’s name, it reminded me that he is a public figure who belongs to the world, and not just to the wallpaper of my childhood memories. He is, in fact, a best-selling author, and the man who encouraged African-Americans to trace their genealogy, with the publication of  Roots: The Saga of an American Family, the novel that traces several generations of his own family from Africa into slavery and then freedom.

But he is also a man whose name never fails to evoke my earliest memories, not because he was ever present in my life, but because of my mother’s friendship with him, which began when she was 16 years old.

On the American civil rights timeline, 1965 was significant. It was the year of “Bloody Sunday,” when 600 people, marching for voting equality, were attacked by police with tear gas and billy clubs on their way to Selma, Ala. The Watts race riots raged in a black section of Los Angeles, and Malcolm X, whose autobiography Haley had co-written, was assassinated in New York City.

That same year, my mother graduated from high school in sleepy Rome, New York, a small blue-collar city in the middle of the state, made up mostly of Polish and Italian immigrants. With its predominately white population, and its lack of proximity to any major metropolitan area, Rome was quiet and unknown, which is perhaps why Haley settled there for several years. He supported himself with magazine publications during those years—he’d already made a name for himself as Playboy’s first and foremost interviewer, publishing interviews with Miles Davis, Martin Luther King, Jr., and Muhammed Ali—and began his work on Roots.

My mother waitressed, along with most of her high school girlfriends, at a local restaurant named Candyland.

“Alex used to wander the streets of Rome with George Sims, his assistant. They’d talk about the book, bouncing ideas off each other, and then they’d usually stop in Candyland for a cup of coffee at some point,” she told me.

Haley took a paternal interest in my mom, who was an aspiring writer. As she waited on him, he offered her tips and advice, and eventually he became a family friend, well-liked and respected by my mother and her parents.

“He was such a nice man,” my mom recalls, “always interested in other people, and you never heard anything bad come out of his mouth.”

A couple of years later, my mother had graduated from business school, and Haley, well into Roots by then, offered her a job typing out his spoken notes. He also enjoyed showing some of the world to her, and once took her along on a business trip to Boston, because he knew she’d never been there.

“He bought me a plane ticket and dropped me off at my hotel, and then he went and did what he had to do and the next day picked me up and took me back home.”

She also accompanied him on business trips to New York City, and one weekend they stayed on Long Island at the home of Elia Kazan, famous for directing such groundbreakers as On the Waterfront. As these stories became absorbed into my family’s history, they became our stories too, and we always felt her brush with fame belonged as much to us as it did to her.

My mom worked for Haley until she married my father in 1969. Haley had moved on too—he became Writer-in-Residence at Hamilton College in nearby Clinton, New York, and continued to work on Roots. The two of them kept up an affectionate, though infrequent, correspondence over the years, and it is through these letters that a picture of Haley more clearly takes shape.

His letters always struck me as warmly poetic—Joy for sure it is to hear from you!—always signing off with his best wishes and the hopes he’d see my mother again someday, but it was many more years before that would happen.

In 1983, he was back in upstate New York to give the commencement address at a local college, and he came to visit my mother, a wife and mother of three. He was now a famous man. “Roots” had been hugely successful; the year after its publication it was developed into a television mini-series, which broke records in the Nielson Ratings.

The writer and historian Les Brown wrote that it “emptied theaters, filled bars, caused social events to be canceled and was the talk of the nation during the eight consecutive nights it played on ABC.”

We were living in a beautiful blue colonial home that my parents had built on a tiny dirt road in the countryside, amidst farms and forests. The visitors we received on a regular basis were mostly family and neighbor kids, so a visit from a famous black author was something to note.

I remember that it was funny meeting him. He was a part of our lives already, and I had never really considered what it might be like to meet the flesh and blood person.

He was kind and soft spoken, and though I don’t remember any of the actual conversation, I can still picture his smile as he looked from my mom, to us kids, and the life she had made since he knew her as a young girl.

That was the last time they ever saw each other, and their correspondence after that tapered off too. Haley died of a heart attack in 1992 at the age of 70.

As I got older and more fully appreciated my mother’s friendship with Haley, I tried to clarify some of the memories that tend to get skewed when we hear them from a very young age.

A story that my siblings and I loved to tell people was how, on a trip to New York City, Haley had introduced my mother to his good friend, Sammy Davis, Jr., who became so taken with her that he got on stage and sang her a song.

But that story had gone the way of many childhood tales—the facts got tangled up through the years until it became mostly fiction. But it turns out that some truth was rooted in there too: One night in the late sixties, Haley was at a theater in Philadelphia and something made him think of my mother, which he detailed to her in a letter the next day.

Somehow the image never has left me of how wide-eyed you enjoyed yourself in New York and I often, when in some “exciting” new place think to myself I wish you could share it.

His letter went on to describe the scene he was writing about: He was backstage, sitting on some props and chatting with Sammy Davis, Jr., who was waiting to perform. Dancers were rushing around and changing costumes. Haley thought of my mother and mentioned his thoughts—

—upon impulse to Sammy—a very sentimental guy. Sammy said, “Yeah man, I can see it.” And Sammy got up and said to me, “We’ll send her a song, man.”

Davis got up on stage. He whispered something to the conductor who relayed it to the pianist and on it went down the row of musicians, and Haley writes:

I was thrilled when I recognized the opening bars of the song “Diane.” And Sammy sang it beautifully, with such feeling. And I thought you would like to know of this. Did your ears tingle, about 10 p.m. last night?

Until the inauguration, it had been many years since I’d revisited Alex Haley stories. I never heard his famous quote before then, but my mom said it was something he would say quite often and in fact, some of his letters to her end with those very words.

To the people who knew him best, I don’t know what kind of man he was. But in my family history, he seemed, above everything else, to bring out the best in people.

To find the good.