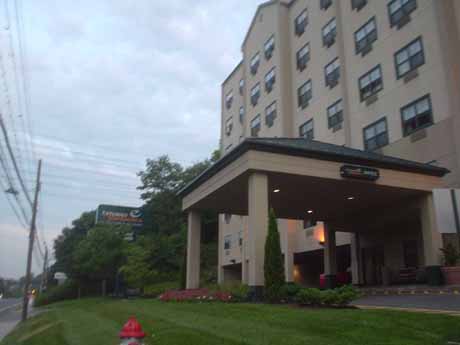 A small fire in Extended Stay America in Elmsford, NY, leaving Mercy students without a room to stay in.

A graduate Pace University student accidentally started a fire in the Extended Stay America in Elmsford on Sunday, January 20, leaving 80 Mercy College students without a room to stay in.

The Pace student left the stove on while cooking, which started the fire, according to hotel sources. Mercy College students who were living in the Extended Stay were shocked to come back from a month long winter break on Tuesday, January 22 to find out that they wouldn’t be staying there any longer. The small fire left the third and fourth floors where the Mercy students resided badly burned.

Thankfully, Mercy took action quickly and the students were immediately placed in the Double Tree hotel nearby, where they stayed there temporarily, until Mercy could find another hotel to place them. Mercy supplied students with small shuttle buses, so they can remove the items in their room from Extended Stay to the other hotels where other Mercy students reside.

“They threw all of my stuff to the side, and everything was wet from the sprinklers,” explains Danay Ross, a sophomore whose room was right next to the fire.

When Ross went back to the hotel on Saturday, Jan. 26 to retrieve her things, she found that her room was a complete mess. Ross found a couple of important documents and a textbook destroyed from the sprinklers.

“Because of the sprinklers, I lost a lot of important documents that I needed for school, and a textbook that I needed to use for this  semester,” said Ross

Although Ross is furious about the sprinklers ruining some of her important items, she’s happy living in the Westchester Marriott for the rest of the spring semester.

Other students weren’t so happy about the move at first. Marisa Martinez was on her way back to the school from winter break when she found out about the fire after calling the school to see if she was financially cleared to move back into the hotel.

“I was initially mad when I found out I had to stay in the Double Tree hotel, especially when they had to change the bus schedules because of us,” said Martinez.

Students stayed a week in Double Tree until Mercy found them a permanent hotel for them to stay. If students acted quickly enough, they were moved first.

“I was grateful for how fast and efficiently Mercy was to take care of this situation. They brought vans for students to move their things out of Extended Stay into the new hotel where they were going to stay,” explained Martinez.

As of today, all the students who once stayed in the Extended Stay are now in a permanent hotel, where they will stay for the rest of the spring semester. They all like living in their new hotels, but they miss some of the accommodations Extended Stay supplied for them that the other hotels do not.

“I miss having a kitchen and being able to use the microwave whenever you wanted to, but other than that, I like staying in the Marriott,” said Martinez.