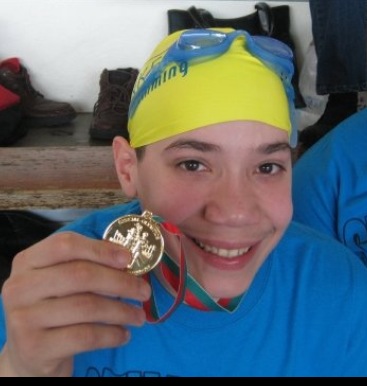 It’s guaranteed that if anyone challenged Devin Marrero in a swimming competition, they would surely lose.

Marrero, a freshman and communication disorder major at Mercy College, was born with cerebral palsy. Yet he has won over 20 medals in the Special Olympics. Ever since he was 13 years old, Marrero has been competing in Special Olympic events such as swimming, hockey, and shot put.

Cerebral palsy is described as brain damage caused by brain injury or abnormal development of the brain that occurs while a child’s brain is still developing before birth, during birth, or immediately after birth. It effects body movement, muscle control, muscle coordination, posture and balance. All cases of cerebral palsy are unique. There are 800,000 children and adults in the United States that are living with cerebral palsy, according to the National Institute of Neurological Disorders and Stroke.

Living with cerebral palsy isn’t easy for Marrero. Although his friendly and outgoing personality always made it easy for him to make friends, bullies were an issue during his middle school years.

“I was the better person for not stooping to their levels,” adds a confident Marrero.

With the support of his parents and his adaptive physical education teacher, Marrero became a stronger person. When he first starting training in the eighth grade for the Special Olympics, it changed his life, and he instantly enjoyed training and competing.

“I loved it. A lot. It really made me the person who I am today,” explained Marrero when talking about his experiences training and competing in the Special Olympics.

According to the SpecialOlympics.org, the Special Olympics is a global movement of people creating a new world of inclusion and community, where every single person is accepted and welcomed, regardless of ability or disability. There are more than 3.7 million Special Olympic athletes that come from 170 countries. Training and competitions happen 365 days in more than 170 countries worldwide.

Although Marrero isn’t competing anymore, he plans on training again so he can compete in the Paralympics. The Paralympics are the biannual event for elite athletes with any disability. They follow the Olympic Games every two years, with both summer and winter events. In the recent Paralympics in Atlanta, Georgia, 3,500 disabled athletes competed from 120 countries around the world, according to Paralympics.org.

Marrero also aspires to coach someone with disabilities who strives to compete in the Special Olympics.

“I would love to give back and coach someone with disabilities. It would be great to teach them everything I learned,” Marrero said.
Even though Marrero isn’t busy training to compete at the moment, he has big plans for the future. He has big dreams of starting a swim team at Mercy College, and wants anyone who is interested to become a part of it.

“It would be great to have a swim team here. I really love swimming and want to share that with everyone here,” explained Marrero.

He also has big dreams of becoming a speech therapist when he graduates from Mercy. Not only did Marrero struggle with cerebral palsy, but he also had another issue that was difficult to deal with as a boy.

His friends are extremely supportive, as they are behind Marrero every step of the way when it comes to his dreams and aspirations.

“He always seems to radiate positive energy,” stated Katie Mulz, a freshman at Mercy College and friend of Marrero.

According to his friends, Marrero is a great, friendly person to be around, who will always lend a helping hand to who ever may need it.

“With Devin, it’s never a ‘hi’ and ‘goodbye’ kind of thing – he’s a friend for life,” stated freshman Tiam Chuck, who is best friends with Marrero.

When Marrero isn’t  hitting the books or going after his dreams, he spends his time hanging out with his friends, playing video games, and just enjoying life.

“I’m just a normal kid who loves having a good time, and being with the people I care about.”