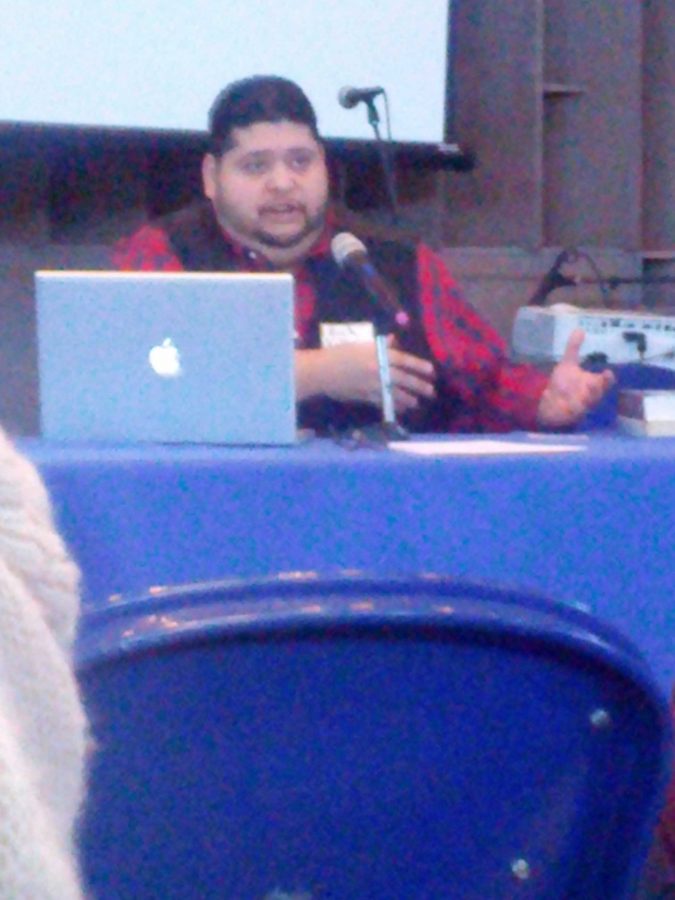 Rich Villar talks to the students about poetry during the conference

“Poetry is transformative, humanizes and gives breath to things.”

This is what Rich Villar, a nuyorican poet and essayist told Mercy College students attending the first ever conference on Latino and Latin American issues and culture on March 6 in the Rotunda.

The conference was a huge success, as students were able to experience the Latino and Latin American culture, as well as learn how the culture can help them with career preparation and development. Those who attended were able to hear from other professionals, such as Dr. Cesar Chelala and Ms. Martha Lopez-Hanratty, who discussed how helpful it is to understand the Latino and Latin American culture.

Poets and fellow writers identified with Villar, who showed the students how interesting Latino American literature truly is.

Villar, originally from Paterson, New Jersey, is an advocate for the Latino voice. He is the director of Acentos, an organization fostering audiences and community around Latino literature. Villar’s poems and essays have appeared in many magazines such as the Union Station Journal and the Black Renaissance Noire. Some of his inspirations include Allen Ginsberg, Mark Doty and Martin Espada.

During the conference, Villar set up a workshop where students were able to learn about Latino American poetry, and the importance behind it.

He began by sharing a story about how he once sold out a 250 seat movie theatre in New York City for the once famous novel and now highly acclaimed movie “Bless me Ultima.”

Originally, the movie wasn’t in New York City because movie producers were convinced that it wouldn’t become a hit in the box office, since it was believed that Latino movies aren’t supported by Latino people.

Villar has goals of reinstating programs that value books, movies, poetry, and any type of literature valuing the Latino American culture. He wants to change the expectations of Hollywood and the public eye when it comes to foreign entertainment.

“I want to change the expectations of everyone about Latino American literature,” stated Villar.

Students were also given the special treat of hearing some of Villar’s poetry, such as a poem titled “How the horse shoe came back to homeboy” and “The River and the Skull.” He also had the audience write their own poetry about their own histories, giving them the opportunity to express their creative side during the conference.

“It was truly eye opening. It inspired me to continue writing poetry about my own life,” stated freshman Katie Mulch, after attending Villar’s workshop.

Afterwards, students who were interested in speaking to Villar one-on-one were able to and could ask how they could improve their writing. During the one-on-one session, Villar gave some advice to those who wanted to become well known writers and poets