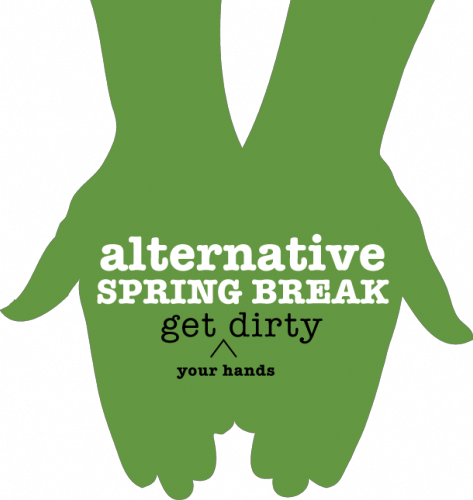 A collective sigh of relief usually erupts in mid-March, when spring break begins rippling across the nation. Flocks of college students head south for some much needed sunshine after months of rain, snow and general bleakness. Airplanes unload masses of study-weary co-eds in Jamaica or Florida or Mexico, young men and women who have left their heavy down coats back home, along with their inhibitions and any hope of extended sobriety. The kids of America’s future who have arrived from cold pockets all over America gather together for a week of censored Facebook photos, all night parties, and memorable but nameless hookups.

If this is your idea of spring break, then pack your bikini and follow your tribe. But today’s college generation lives with a heightened awareness that they’ve been left to clean up the mess that has been made of the world, hence the evolution of alternative spring break.

Alternative spring break is nothing new; in fact, one of the original programs was created at Vanderbilt University in Nashville two decades ago, but it was really Hurricane Katrina that catapulted a new generation of college students into the public service limelight. In 2006, United Way and MTV created Storm Corps, a team of 100 college students the helped rebuild homes, daycare facilities and community centers that were destroyed in Hurricane Katrina.

Hurricane Sandy has now created similar opportunities for college students looking to be of service. In a formal press release, New Jersey governor Chris Christie stated that over 30,000 businesses and homes had been destroyed.

“I’ve called this experience New Jersey’s Katrina because the damage to our state is nothing that we’ve experienced ever before,” said Christie.

The United Way of Northern New Jersey is offering weeklong opportunities throughout the month of March for students to assist with rebuilding projects. Poverty stricken families who were affected by Hurricane Sandy are the focus of this year’s United Way Alternative Spring Break. Volunteers will lodge at the Boys and Girls Club of Newark, while also providing building maintenance for the facility and mentoring local boys and girls.

Laura Bruno, Public Relations Manager for United Way of Northern New Jersey, confirmed that they have about 250 registered volunteers, and “students can still sign up to join us later in the month.”

If students are interested in something a little more exotic, many organizations offer opportunities that are tailored to that one week of college freedom in March. Projects Abroad is a New York based organization that offers trips somewhat close to home since students only have a week for travel and service work.

According to program advisor Christian Clark, the most popular spring break trips are currently in Jamaica and Costa Rica, where volunteers work at local orphanages helping kids with homework, preparing meals, and assisting with any maintenance and beautification projects.

“When people want to volunteer, they often want to help kids, which is great because kids are great. This is also our most popular program across the board.”

Emily Hart, a junior at Clemson University in South Carolina, opted for this program in Costa Rica, which she described as uncharacteristic of herself.

“Spring break, to me, usually means me and 20 of my friends on a beach in Florida, but I’m so glad I stepped outside the box and went to Costa Rica,” she said.

Hart credits her alternative spring break experience for motivating her to spend her entire junior year abroad, beginning with fall 2012 in London and now finishing out her junior year in Wellington, New Zealand.

“I definitely think that trip spurred my decision to further my travel. I really enjoy exploring other cultures and love surrounding myself with those who are different from me.”

Students can also choose projects in Morocco, where they’ll live with host families, study Arabic, and volunteer in the community. In Mexico, they can spend a week on the beach, bringing turtle eggs to safe environments for hatching, or maintaining a local crocodile farm.

“Morocco is obviously not so close to home but we offer it to give people a bit of an alternative. And also there are a lot of direct flights from the East Coast,” said Clark.

The goal of Project Abroad’s alternative spring break is “to have more hands available for a shorter period of time,” according to Clark, and the program is going well, with more students signing on each year since its inception in 2010.

The organization is also concerned with the local economy and strives to employ people who live in the communities that their volunteers are servicing.

Conservation based opportunities are currently gaining in popularity, as well. Volunteers who sign up with the American Hiking Society typically spend a week camping out in one of America’s state parks or national forests, building and leveling trails, cleaning debris, repairing footbridges, and restoring campgrounds. There is a range of difficulty levels, but on most weeklong trips, volunteers will hike two to five miles per day.

Libby Wile, Director of Volunteer Programs for AHS, said the impact of these trips on young people carries over long beyond their one-week duration.

“It opens their eyes to the possibility and the necessity of trail maintenance. Many students come back to volunteer with us again, and others go home and volunteer for environmental causes locally.”

As environmental need grows, so does this type of program. AHS started in 2008 with two different trips and 20 students. This year, they are offering 11 trips and have 120 students.

“Many college students have never done a service vacation, not to mention an outdoor service vacation. They engage in physical activity, get exposure to the environment and experience conservation and trail maintenance,” said Wile.

Alternative spring breakers might come back with a different set of stories than their beach-going peers, but they are no less memorable.

Based on her experience in Costa Rica, Hart recommends diving in. “I would tell anyone who is considering alternative spring break to just go for it, because it will change your attitude towards any new experience you will encounter thereafter.”