As she prepares for reelection, MaryJane Shimsky visited Mercy College To Talk Politics, Environment and Her Strategy In Reaching The Younger Voters 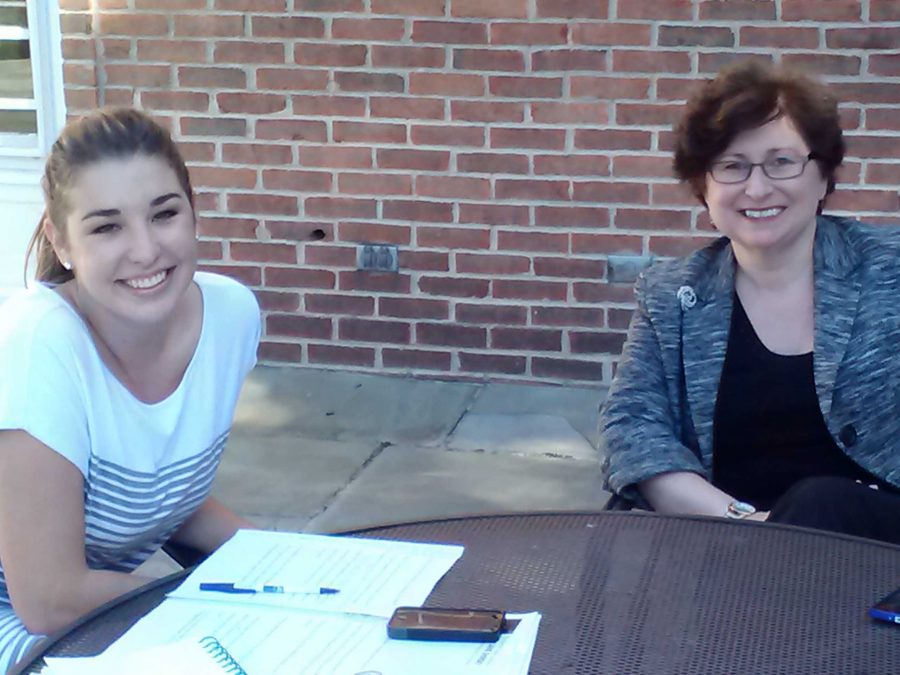 From her previous two and a half years on Westchester County Board of Legislators, District 12 constituents can identify MaryJane Shimsky as an overachiever. Some may only be familiar with her work as an environmental activist. However, her full plate comes with a side of prestigious wit and an echoing voice behind community preservation, all the while balancing a role as super mom. This PhD-philosopher- art enthusiast has come a long way from her own college years at Yale and is now focusing on a more balanced tomorrow, both environmentally and economically. But first, Shimsky is taking to Mercy’s campus for a pre-election interview with The Impact.

She walks with the air of what you’d imagine all Yale graduates do, as if poise were a prerequisite. Taking a sip from her tall porcelain thermos, the legislator absorbs the fall afternoon from Verrazzano Hall’s back patio. Though this is not her first visit to Mercy’s Dobbs Ferry campus, she glances around with curiosity.

“My son used to attend religious instructions up at Lady of Victory, so I would often browse the campus and last year I came back for the health fair,” Shimsky explains before posing for a picture. Beneath her square framed spectacles, a pair of ruby earrings dance in the sun, adding a casual flare to her freshly pressed tweed blazer. Her neighborly tone calms in a way that one wouldn’t expect from a candidate with her experience. One would only assume it to be a nature achieved from her time spent negotiating in the court room or perhaps from her familiarity as a local government liaison for former Assemblyman Richard Brodsky.

“By the way, I am great at multitasking, so feel free to keep asking questions while they take pictures,” Shimsky adds with a smile.

Since she is a a mother of two, multitasking has always inevitability been a part of Shimsky’s career. Balancing a strong political presence within her district and conferring with state government with attending her daughter’s dance recitals quickly, yet unsurprisingly, became full time jobs.

“There are only so many hours in the day,” Shimsky exhales; though based on her resume one can only assume she makes use of all 24 and likes it that way. She graciously attributes half of her success to her husband of 28 years.

The two Yale sweethearts sent their oldest, Isaac, off to college last fall. One would think Shimsky, being an Ivy-league grad, would hold high expectations, not just of her children, but of all college students. With diplomas and awards littering her shelves, how could she not? Yet, she remains genuinely committed to reach this generation and their political involvement…or lack of.

“The more local the government, the less involved younger voters are. I know as college students, you are still settling as young adults. You don’t live at home anymore, and you have to learn how to fend for yourself. It’s a time for discovery,” Shimsky explains with an understanding nod, “though I hope that by visiting Mercy’s campus I can encourage younger voters to recognize the importance of county government.”

A majority of Mercy’s students may not know it, but they have already benefited from Shimsky’s feat at safer roads, highways and railroads. She allows her eyes to wander to Mercy’s packed parking lot, proudly making note that county funding provides stronger patrol of the highways and bridges as well as providing efficient emergency service training to the area.

“The first political issue I think I was ever interested in was the environment,” Shimsky continues with a slight blush. “I remember the first Earth Day, and it just made sense. As children, we are taught what to do, how to act and what to take care of, and to this day I find that taking care of our planet is the most important.”

In addition to her role as County Legislator, Shimsky is a member of the Sawmill Watershed Advisory board (SWAB) as well as Westchester’s Stormwater Advisory Board, where she pilots infrastructure preservation. With her recent honor from U.N. Association of Westchester, it’s safe to say she has taken “multitasking” to a whole new level.

From an early age, MaryJane found herself the most outspoken in a room. She reminisces about her childhood when family acquaintances would tell her she should run for office.  Her hunger for news was often satisfied by newspapers like the New York Times.

“I could never really understand why no one else was as interested in the fine points of civil engineering bridges as I was.”

Though Shimsky is running unopposed in this election, she has managed to keep busy amidst her campaigning, keeping up public policy and maintaining government functions in White Plains. Shimsky, along with the rest of the board members, has been making progressive strides not only with natural safeguarding, but energy conservation as well.  The board ensures that by using efficient power methods such as LED lighting, compact florescence bulbs, and solar panels, the county can cut costs in energy expenses immensely.. This in turn creates an economically friendly power source. To most, going green means spending more, but contrary to common belief, the methods that Shimsky and her board propose actually even the playing field, resulting in an economic and environmental victory.

It is obvious, if not through her background, but through her time in office; Shimsky is anything but complacent about the progress she has already made in her district. As her supremacy as Westchester County Legislature approaches yet another term she plans to gain momentum with strategy and strong local roots.

“People always ask me if I rely on my history degree now, or if I use my art history background…and you know what?” The legislator shifts in her seat, using her hand to help with her testimony. “Everything I have done in my life contributes to the elected official position I hold today.” This she says very slowly, as if there are periods after each word.

She continues, “A career is no longer a 40 year commitment; it is important for young adults in college to set goals, intern and gain experience wherever they can. Don’t let fear stop you if after a few years your plans change. Mine did, and I wouldn’t be here if I stayed on one path.”

For a moment she is not a politician, nor lawyer, nor PhD, but a life coach sharing honest guidance.  She sits in the same patio chair with the same poise as before, yet is somehow transformed by her deep intellect. How refreshing it is to hear from someone of her prestige.  Her sermon is genuine and profound, if just short of maternal.

She pauses to take another sip from the same reusable porcelain thermos before completing her counsel.  “I mean, Barack Obama wasn’t born President.”