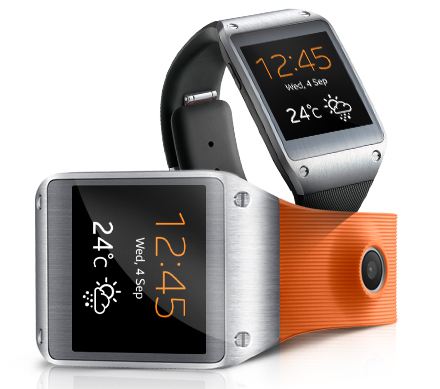 There are only two cardinal rules to follow if you’re a tech company, be first and be the best.

Right now in the arms race that is technology, Apple’s at the top of the food chain and Samsung, Google and Microsoft all want blood.  Many companies are now struggling to come up with the next widely used device. Samsung and Apple; who are bitter rivals, are hoping it will be the smart watch. Smart watches are devices that live on your wrist but also have some of the same capabilities of smart phone.

Samsung is coming out on top by being the first of the rivals to unveil their version of a smart watch, Galaxy Gear. Galaxy Gear is meant to be a companion device to the Galaxy line of smart phones, and was released along with the new Samsung Galaxy Note 3. The watch is not a standalone device, and will not function without a smart phone overlord. The general purpose of the watch is to be able to use a smart phone without having to take it from your pocket.

The watch has a 1.63 inch Super AMOLED display with a 1.9 megapixel BSI Sensor auto focus camera, which is also capable of taking video. Packed inside is a tiny 4GB of internal memory with 512MB ram, the device relies on Bluetooth connectivity and features some Samsung services such as Samsung apps and ChatON. The device can be used to show weather alerts, display text messages, emails and incoming calls. Users are also able to use the watch to answer and make phone calls. One of the neat features of the watch is the fitness capabilities with apps for joggers that monitor things like heart rate and calories burned. The watch can also dial 911 for the user and sends a GPS signal with the user’s location. The device has a smart relay feature which sends messages between devices. The watch also has S-voice which is a voice recognition feature, so the device is also completely voice enabled.

The Galaxy Gear is priced at $299, which makes it an expensive device that does what your already expensive smart phone does. The biggest downside to the watch is the price point; many consumers will fail to see the value in buying a device that acts like a mini smart phone, especially when one figures in the fact that it only works with the Samsung Galaxy Note 3, which is also priced at $299. There may be virtually no average consumers looking to spend that amount of money and the first few devices will probably only be sought out by tech enthusiasts.  The watch is also a little bit bulky and is so new that it will look strange at the wrist, but it is definitely a conversation starter.

When consumers first hear about the technology, some aren’t excited and, and reluctant to see the use in it.

“ I’d probably just use my phone because, I already have that,” said Mark, a freshman studying health science who owns a Samsung Galaxy 4. However students soon change their tune when they realize the possibility of using a smart watch during one of those 3-hour lectures. “Actually, using one during lecture could be cool, and then you don’t have to worry about looking disrespectful in class when you just want to check your email.”

Apple has decided to play it safe and like the cool kid, show up late to the smart watch party; only after scoping out if the party is worth going to. Apple is undoubtedly watching tech blogs, Samsung press releases and sales to find out how consumers feel about smart watches and what they don’t like about it so they can tweak their design to come out with the most consumer friendly model possible.  Although Apple has declined to comment on the existence of such a device, records show that they have patented a device and have been working on one since 2011 with over 100 employees dedicated to designing it. Bloggers have also speculated that the device will be named iWatch.

Google has recently purchased WIMM, a company that makes smart watches, so the rumors have already begun to fly. Google’s biggest competition will be their partner in Droid and Samsung, but Google’s device may have an edge if it is able to work with any Android device, not just a Samsung product.  Windows may be working on a smart watch, but like the nerdy kid, they probably won’t show up at the party until it’s over.  Being the first to show up Samsung will have an additional edge, because by the time the other companies actually unveil a device, they will be working on their second generation which will likely be an improvement with a lower price point after testing the market.

If Google Glass and smart watches are any indication, the next big thing will be wearable technology.