Opening of the Global, Cultural and Diversity Committee 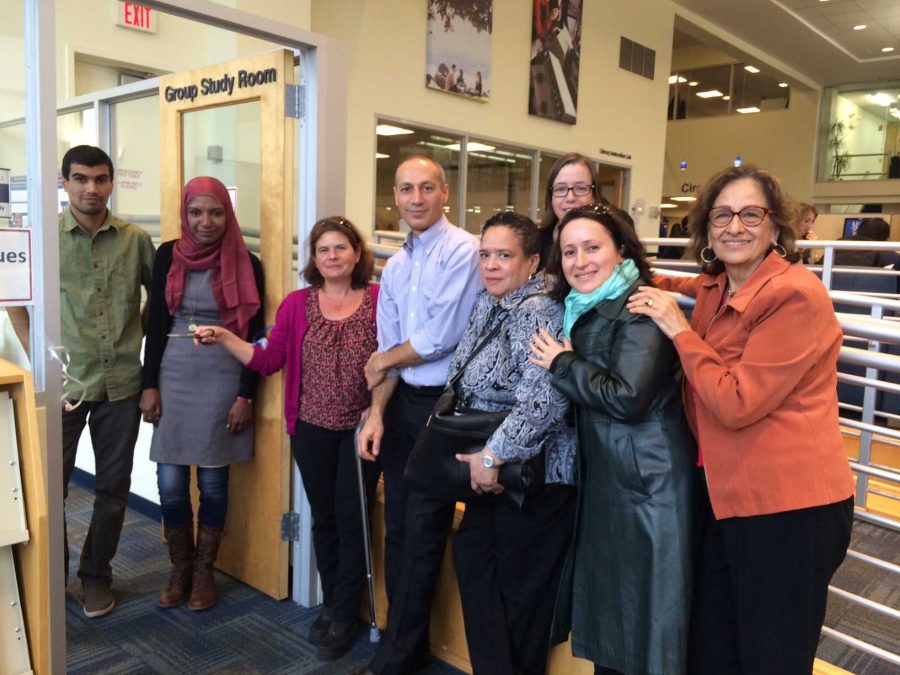 Cutting of the ribbon to the Global Issues Room

She touched base on several global and cultural issues occurring in Cairo, Egypt including the Revolution that took place in 2011.

Dr. Celia Reissig-Vasile, newly elected chair of the Global, Cultural and Diversity Committee, and Mustafa Sakarya, director of all Mercy College libraries, have joined together and decided to turn the Group Study Room in the Dobbs Ferry campus library into the Global Issues room to give students the opportunity to study, as well as give them a place to bring up and discuss issues around the world.

Their primary objective is to bring international events and issues to the attention of the Mercy College community.

“I would really like to activate the library so that passivity is no longer an option. We really have to be involved with what’s going on or we will be involved without our wanting to be,” said Sakarya.

Therefore, the Global Issues room in the library will allow students to come together to bring awareness about such global and cultural events. In doing so, committee members of the GCDC will be bringing in material and resources  such as maps, posters, flyers, newspapers and magazines,  all with an international theme to them.

In addition, students will be able to be hands-on with the material and also be encouraged to bring in any research work they may have to add to the global studies room.

“We have a research certification program in the library where we are asking students to bring in their research projects to the library especially projects that have an international theme or have to do with some critical issues such as sustainability, environmental issues, human trafficking, terrorism or anything that is really critical and display their work around the Global Issues room and other parts of the library,” adds Sakarya.

Saddiek was asked to briefly discuss several global and cultural issues in her country during the opening of the Global, Cultural and Diversity Committee. She opened up by giving a preview of what the culture was like in Egypt and played several songs and showed visuals of the beautiful landscapes in Cairo.

Unfortunately, the events taking place in Egypt weren’t as beautiful as the country. Saddiek shared personal stories of the revolution that took place in 2011. It was not only a huge event in history, but it was also very personal and dear to her because she was actually in Tahrir Square when it all went down.

“I started with the revolution because it’s my own. It is something I lived and very important in Egyptian history,” said Saddiek.

During the revolution, people were treated poorly and endured an enormous amount of police brutality. However, this wouldn’t stop them, she said. They were taking a stand and decided they were no longer going to be ruled by the tyrannical president, Mohammad Mubarak. Therefore, they gathered together as one and began to protest. They were determined to do all that they could so that Mubarak would eventually step down.

As this was taking place, every news station was reporting on it. Americans were able to see first-hand through the media what these people were going through. However, nothing could compare to those who were actually apart it.

“I chose to speak about the revolution today because as I see from the media and all over the world, the revolution is not portrayed from the perspective of the people that lived it,” said Saddiek.

Aside from teaching Arabic classes and conducting the Arabic coffee hour at Mercy College, Saddiek is also on a mission to break down the barriers people have of one another.

“The media and everything around us make those from the Middle East look crazy. I’m here to also make people recognize the stereotypes we have of each other,” she adds.

The event came to an end as we all gathered around to watch Reissig-Vasile have the honor of cutting the ribbon to the Global Issues room. As newly elected chair of such a prestigious committee, she has high hopes for what they will achieve in the near future.

“I am looking forward to our Global Issues room and increasing our global literacy as well as increasing the awareness of global, cultural and diversity issues.”

Those who came out were not disappointed. They thoroughly enjoyed such a different kind of event and are excited for what’s to come.

“This was an exhilarating experience. The guest gave us some very important information about Egypt. I was overwhelmed and excited about some of the things I learned today. I hope she continues do this because I would come back again and again,” said Michele Lee, head librarian at the Manhattan Campus. 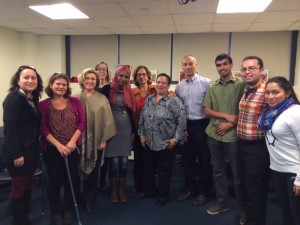 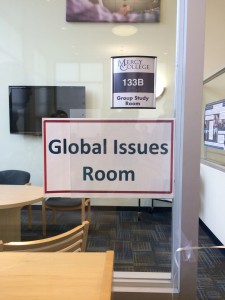