Health Expo Livens Up The Bronx 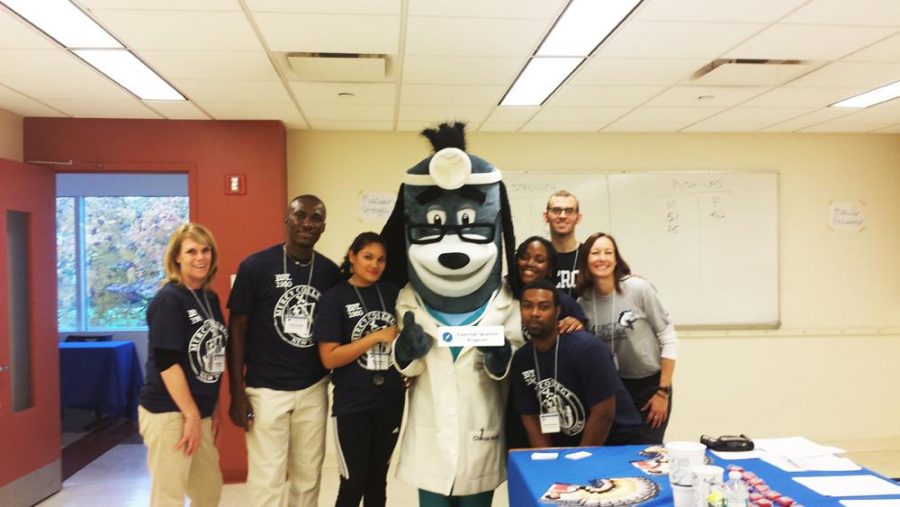 Mercy College hosted Navigating Health: An expo on personal health, wellness, and health care access and health careers on Nov. 2. The goal of the expo was to bring health care knowledge to the Bronx community, the sickest county in the state.
“We are so proud to be the Bronx. We have over 3,000 students in the Bronx and we are educating the next generation of workers in the Bronx” said Bernadette Wade, Chief College Relations Officer.
The event began with an opening speech from Bronx Borough President Ruben Diaz, whose speech noted the revitalization of the Bronx, and his concern for the health of the Bronx residents.

“The reason we are here today is that the healthcare industry is the largest employer here in the Bronx, and we are trying to solve this conundrum. How is it all these great things are happening and so many people are still sick in the borough?” asked Diaz.
He continued to say, “We have some of the best health care institutions on the planet. We have 1.4 million people who live here and 1 out of 4 of those adults are employed in the health care industry. Shouldn’t it be that if you’re a nurse, a doctor, a dentist or home care attended and charged with taking care of others shouldn’t you yourself be healthy and shouldn’t you have the knowledge to ensure the health of your family?”
The event was highlighted by free health care screenings to get the community involved in their own healthcare. The event featured free blood pressure screenings and blood sugar tests performed by physicians’ assistants and nurses. According to the CDC, “Recent data indicates that certain Hispanic sub-populations are characterized by low levels of hypertension awareness, treatment, and control. Because Hispanics are the fastest growing and youngest racial/ethnic population in the United States, targeted strategies to reduce morbidity and mortality rates among this population are essential; comprehensive hypertension prevention and control programs are needed to target these Hispanic sub-populations.”
The cost to the economy of having high blood pressure on the economy is tremendous; High blood pressure costs the nation $47.5 billion annually in direct medical expenses and $3.5 billion each year in lost productivity, further cementing the idea that healthcare is tied to the economy. African Americans have the highest rate of hypertension in the United States; demographics show that 30 percent of Bronx’s population is African American.
Obesity is also a problem among the Bronx population. A study in 2009 showed that 68 percent of the county is overweight or obese. The health expo offered fitness workshops to get the community interested in the important of physical fitness. The event featured four Zumba classes and three yoga classes, which were some of the most popular events at the expo. There was also fitness testing, proper exercise and nutrition tips and functional fitness which stressed the importance of exercising every day.
These events also allowed students and professors such as Dr. Astrid Mel to show off the new exercise science programs at Mercy College. Obesity rates among children in the Bronx is at an alarming level. The expo featured Cornell’s Extension Center presenting nutrition Tips and Tastes with a demo presentation of how to make confetti bean salsa and other recipes to get children to eat healthy. Nutrition in the Bronx is an important topic seeing as how in 2009 only 6.3 percent of adults admitted to eating five or more fruits or vegetables per day. The expo also featured an entire zone dedicated to children and parent activities which featured free face painting sponsored by united health care and other interactive workshops to get kids interested in their health.
Beyond giving the community knowledge about their health the expo also aimed to inform people about in demand careers in health. The FDNY was on hand to provide CPR and Emergency Techniques to the public for free an invaluable skill that can save a life while also creating the desire for a career in the health care field. The small room contained about 15 or more dummies to practice techniques on.
An undergraduate health professional’s panel hosted by Dr. Anthony Canger, the department chair of the natural sciences program, was also at the event. The panel featured around five students discussing their career goals in health; they also spoke about what drives them to become health care professionals.

“Make the right career choice. That’s the key to all of this. Be happy in what you do and be passionate about it. That’s number one,” said Canger.

He also spoke about the important of doing undergraduate research and keeping yourself busy in many different extracurricular activities. Dr. Amanda Gunning, assistant professor of secondary education was on hand to speak about the new education BS/MS program being offered at Mercy College in spring, which will offer a $40,000 scholarship.
“Why is it that many of our young people in junior high school and high school aren

’t focused on becoming health care professionals? I don’t have all the answers, but the first step is having events like this which is a continuation of our ongoing dialog about the important of health care,” said Diaz. The event also contained a Health Professionals Panel on the graduate level with PA, OT, PT, CD and nursing students on the panel.
Understanding healthcare also comes with understanding health insurance. The event took the opportunity to properly introduce the community to The Affordable Health Care Act, presented by the Westchester Department of Health. Empire Blue Cross/Blue Shield also presented “The Affordable Care Act: What you need to know.”
The Bronx also has a high incidence of asthma, which can be linked to the high smoking rates in the area. The rates of death from asthma in the Bronx are three times higher than national average and hospitalization rates are around five times higher.

To help combat the problem, Canger presented the community with “The Science of Human Disease” workshop which featured microscopes of diseased lung tissue, and various anatomical models to help educate the community on how disease affects the body.
Overall the health expo was a success with the community who appreciated learning about how to create a healthy environment for themselves and their children. “I really enjoyed the event, I learned a lot I have two kids and one of them has asthma, it’s nice to know that the community is working together to make the Bronx a healthier place,” said Ty-liah Taylor a guest at the event.

Alejandro Portillo, a student and volunteer at the expo, said, “I loved helping. The event was great. There were so many different things to see. I live in the Bronx, so it was important for me come out today and help support my community.”