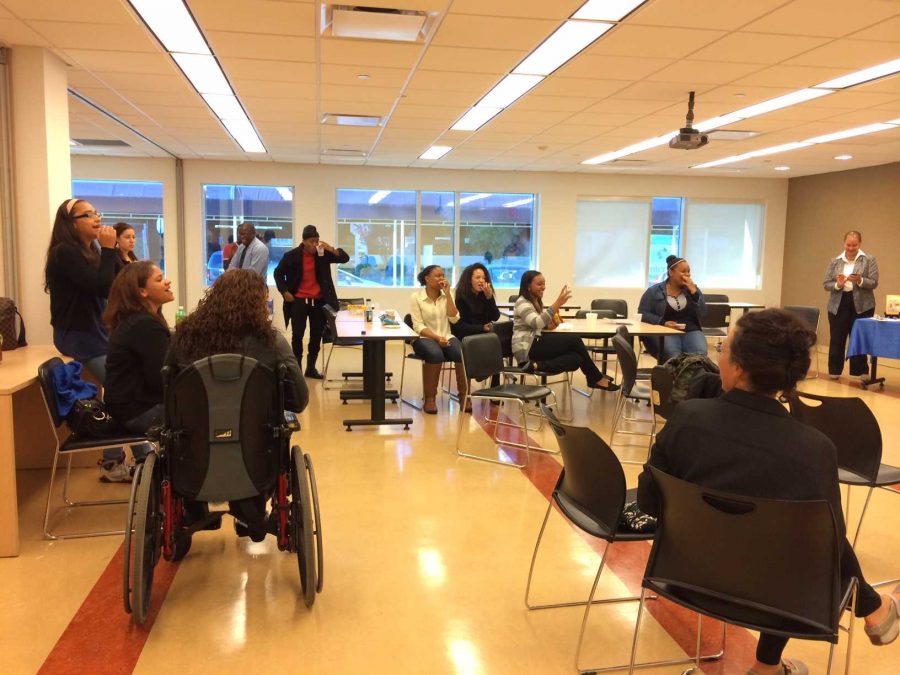 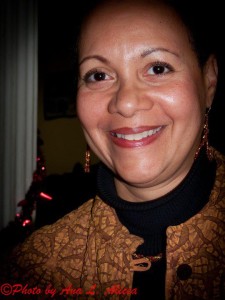 Oct. 15 was Hispanic Heritage Day at the Mercy College Bronx campus, where students were encouraged to experience the Latin culture. Faculty, students, and friends gathered around as writer and community activist Maria Aponte performed some of her best work.

Aponte, born and raised in New York City’s East Harlem (El Barrio),  has worked extensively in Latino Theatre and in video productions that deals with racial discrimination, and women’s rights in theater and film. Maria’s one-woman show, “Lágrimas de Mis Madres” is a biography about the women in her family. She also wrote and performed “I Will Not Be Silenced,” based on the life of Sor Juana Inés de la Cruz, Mexico’s first feminist poet and playwright. Maria performs her work at various colleges, universities and artistic venues locally and nationally, according to her book Transition of a Nuyorican Cinderella.

As she performed her poems, she had a band playing salsa music in the background. Some Hispanic students felt right at home.

“Hispanic Heritage Day was very interesting and the music from the band reminded me of the celebrations I had back home. It made me want to go back and have fun,” said Sasha Hernandez, a Mercy College senior.

Aponte shared personal issues and experiences as a Hispanic in the Bronx through her poems. Whether Hispanic or not, people were able to relate in one way or another. One of the most captivating poems she performed was called “Inheritance,” that dealt with her experience going into her grandmother’s “special” room. Her grandmother was known as an “espiritista,” which in English means spiritualist. She dealt with all kinds of spirits and her room was sacred. Only her clients were allowed in there.

Aponte utilized her band and set the mood for her poem. She was able to make the audience feel that they were actually there going through the entire experience. Students were at the edge of their seats, anticipating for what was to come.

“The event brought an atmosphere of creativity bringing the Hispanic Culture to life on campus,” said Troy Ancrum, a Mercy College senior.

Unfortunately, Hispanics are often looked down by others. she said. They can be viewed as loud, uneducated, and intimidating. However, Aponte strives to be a positive role model through her poems and events she organizes.

“I believe that acknowledging our history, culture and traditions is important to keep the common thread of community alive within the Latino community.  By creating artistic venues that invites all Latinos to express their cultural roots, we are learning and respecting our individual identities.”

As the event continued, Aponte and her band took time out to lecture us about the culture and music from the past. Aside from watching an amazing performance, the audience were also being educated on important topics in the Latin Culture.

“I think we need more events like this in the Bronx campus. I wasn’t expecting to learn a lot through this event. It was a good experience,” said Adrien Reyes, a Mercy College senior.

Aponte is a perfect representation for the Hispanic Culture and Community. In 2010 she was given special recognition for her work in the arts with women from the Eve Ensler Organization. The award noted that she was  “someone who has suffered or witnessed violence, grieved it, transformed it, and then does extraordinary work to make sure it doesn’t happen to anyone else in their community.” She received this award at the first Spanish V-day Monologues at the Nuyorican Poets Café.

She also hopes to return to Mercy College and her overall goal with her events is to give new and upcoming artists a platform to do their work and expose them to live music and working with musicians.  I am a big advocate for preserving history and teaching through the arts.

Her future plan for now is completing her Masters in Latin American and Latino Studies at Fordham University in spring 2014. She is also working on her second book and on a major project that will focus on honoring Latinas over fifty.

“And last but not least, always continue teaching and giving to my community.”