It All Started With A Pig Fetus 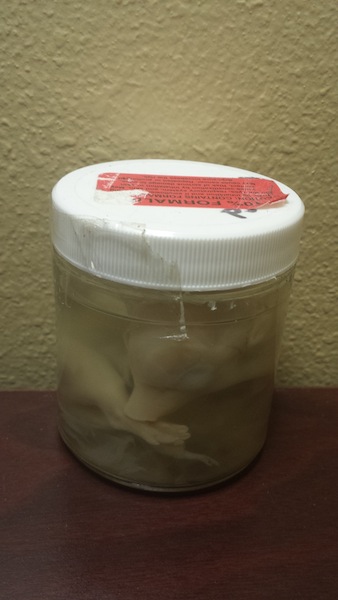 An octopus, a pig fetus and a sea horse are Gabrielle Gunther’s prized possessions.

No, they aren’t alive. They are preserved animals owned by 20 year old Gunther, a vet technology major at Mercy College.

This past summer, Gunther started her collection, after finding the pig fetus in an antique shop in Walton, New York. Since then, she has found a love of collecting preserved specimens and wants her collection to grow.

She enjoys finding the animals randomly, and has had a lot of luck finding them in other antique shops. Last month, she found a preserved sea horse in a local antique shop in Tarrytown. To one’s eye, it looks fake. But on the back, there is a full description of the sea horse and where it came from.

“Each of the animals has a special meaning to me,” she explained.

Although she enjoys searching for the animals, she doesn’t mind getting one as a gift. Her newest addition to her collection is an octopus, given to her on her 20th birthday by one of her close friends.

“They’re just so interesting! Did you know that they have three hearts?”

Gunther continues to “hunt” for other specimen in her spare time. Although she specifically doesn’t care which animal she finds next, she hopes to one day find either a preserved, deformed pig or another kind of preserved yet deformed animal.

Her family and friends have been very supportive about her growing collection. Some of them have even asked if she has named any of the animals, which she finds extremely odd.

“I can’t name them. It just doesn’t seem right.”

There was a time in her life when she wasn’t interested in collecting preserved animals. She recalls her father bringing home two ostrich eggs from the airport when she was 12 years-old for her and her younger brother. Thinking it was a silly and dumb gift, she threw the egg out, and regrets her decision today.

“I can’t believe I just threw it out. Looking back on it, I know I made a huge mistake.”

Although she has always had a love for animals, Gunther wasn’t always sure what she wanted to pursue in life. In high school, she went to a Board of Cooperative Educational Services (BOCES) program for cosmetology, having high hopes of becoming a hair dresser. Yet, something told her she didn’t want to do this for the rest of her life.

Gunther attended Nassau Community College for two years, earning her associate’s degree in liberal arts. Throughout her two years, she spent her time looking at veterinary schools to apply to. Ultimately, she transferred to Mercy a year ago and has been in the veterinary technology program and hasn’t looked back. She hopes to one day work with either exotic animals or in an animal shelter.

“I really can’t see myself doing anything else,” she explained.

When she’s not collecting preserved animals, she enjoys spreading awareness about puppy mills, a commercial dog breeding facility that is operated with an emphasis upon profit over the well-being of the dogs.

“All of the dogs found in pet shops are from puppy mills. More people need to be educated about where those dogs come from.”

The passionate animal lover enjoys volunteering at her local animal shelters and loves shelter dogs. Brandy, Gunther’s Rottweiler-German Shepard mix dog, a shelter dog, is the love of her life.

As of right now, Gunther is focused on her school work and is counting the days until her big trip to Costa Rica, where she will go and save sea turtles with 10 other vet tech majors from Mercy College.

That won’t stop her from collecting some more interesting preserved animals. One of her co-workers suggested she check out a store in New York City known as Evolution, which sells different types of taxidermy, skeletons, and fossils.

“The next time I’m in the city, I plan on stopping there. Maybe I can add new stuff to my collection!” she says hopefully

For now, she plans on going back to her favorite spot in the library to do some homework and catch up on some lectures from her vet tech classes. When asked if she was going to any antique shops this week, she shook her head no.

“I’m just going to study and dye my hair an almost purple color.”