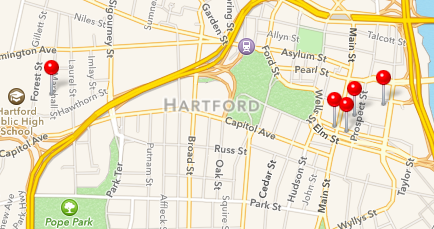 Mercy College is always planning different trips and activities to visit a variety of diverse locations throughout not only New York, but the entire country. The most recent trip was part of the Honors Program to visit Hartland, Connecticut and enjoy some of the more historical aspects of the state and the city itself.

The trip from Mercy to Hartland was very scenic, as we travelled along the highway for a couple of hours taking in all of the breathtaking views along the way. The trees were still full of vibrant colours from the deepest red to the brightest yellow, and the old houses with the rocking chairs on the porches brought a sense of nostalgia to mind.
The Wandsworth Museum of Art is a beautiful 19th century building which has been renovated inside into a breathtaking modern building filled with contemporary and historical art pieces and sculptures from all over the world. The influence of American history can be seen throughout the museum with works from Jackson Pollock and Georgia O’Keefe. European artists such as Salvador Dali and Pablo Picasso are also a big feature in the mass appeal to this gallery.

The Mercy College group was separated into two smaller tours and were taken around by a member of the museum who provided an insight and background into many of the paintings and sculptures. The group was directed towards a large gallery on the top floor which overlooked a large foyer with a glorious fountain in the center  filled the entire building with a very natural sounds of running water.The Hudson River School of Art was not a school as such but more of a collection of artists  who took inspiration from the great Hudson River on which Mercy College is situated. The group was shown a wide range of pictures from the local area, but also a select few paintings that were created around the world but showed the influence of the Hudson Valley. The most notable piece was of an oncoming tropical storm in the mountains of Jamaica by Frederic Church. The piece shows a sort of calm before the storm and the heavy influence of charcoal is very typical of Hudson River style. A sense of familiarity draws you into the art work and you really can get a feel of the Hudson River’s influence even though you are looking at a mountain range in Jamaica.

After lunch in the Wandsworth Museum, the Mercy College students were taken across Hartford to visit the historic Nook Farm, where both Mark Twain and Harriet Beecher Stowe’s homes were located. The group was taken around the individual homes and given very specific details on the lives of the two writers whilst they lived in Hartford and what they accomplished throughout their lives with regard to slavery, women’s rights and education in America. The Stowe home was a quaint house in which everything was very small. Harriet herself barely reached 5 feet in her lifetime, so a small house was all she needed to get by. Twain’s house, however, was a grand example of 19th Century American architecture. Everything was made to make it look bigger and better than the next house, and it certainly did that. The group was taken around the house and up to the third floor where they came to Twain’s billiard room, in a sense it was a man’s room. The ceiling was decorated with emblems of billiard cues, cigars and pipes. The large desk over looked the grand table in the center of the room and the balcony had a wonderful view, which in the 19th century overlooked a gorgeous wooded area and a small river that ran through the entire farm. In the corner of the room was a much smaller desk with a small lamp. This is where Twain wrote his classic American novels, Tom Sawer and Huckleberry Finn.

The Hudson River upon which Mercy College sits represents the ideology of the original settlers who came across the Atlantic Ocean. They saw it as a beautiful obstacle in their way of expansion and cultivating the new world. This idea of the Hudson River being a gateway into the unknown continent is reflected in Mercy College: rather than expanding the nation, the students want to expand themselves into better and brighter people. The river embodies the importance of the American imagination and emphasizes both the vastness of the great country but also the vastness and vivid imagination of the students who wake up to the same view as those innovative settlers and artists did all those years ago.