First they are sweet, then they are deadly : Sugarless Gummy Bears 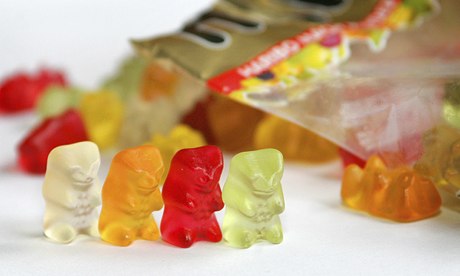 “Intestinal distress,” in this case, might be an understatement for what a series of viral Amazon reviews call, “trumpets calling the demons back to Hell,” “guttural pronouncement so loud it threatened to drown out my own voice,” and “100 percent liquid. Flammable liquid. NAPALM.”

These are just some of the reviews that Haribo sugar free gummy bears have on Amazon.com.

These delicious little demons that are addictive give one hell of a stomach ache and hours of pain when the sugar is taken out.

When looking at the nutrition facts, the first ingredient in this sugar-free variety is lycasin, hydrogenated syrup. Lycasin consists mainly of maltitol. Maltitol is a sugar alcohol that is almost as sweet as table sugar but half as caloric, which is in many sugar-free foods. Maltitol is known to be great because it doesn’t cause cavities, but our bodies can’t fully digest it, so it can cause turmoil in the gut.

The known side effects of the excessive consumption of lycasin are bloating, flatulence, and loose stools. The excessive use of lycasin is basically a laxative for the body. Even though this ingredient is in most sugar-free substances, gummy bears are mostly sugar so the replacement sugar would be extreme.

The substance lycasin is considered safe to eat, but in clinical studies, adults who consumed 40 grams of lycasin saw an increased frequency of bowel movements and “watery feces.”

Ironically, these gummy bears on Amazon only come in 5 lb. bags which are 2,267 grams: in other words, pain.

Gummy bears have become so taboo to eat that you can Google it and it will come up as a cleanse, or even a Gummy Bear challenge.

After asking about 50 different people in Mercy College, only 25 percent  knew what sugar free Gummy Bears were and their effect. The other 75 percent were thankful that they now know what they are. Most students don’t know what they put in their body and how negative it is for their health; being healthy in college isn’t always the priority.

“People simply shouldn’t eat it,” said the President of the Exercise Science club, Alexa Klapach. “Since it is not pure for your body, and your body needs to get rid of all the toxins in these gummy bears, why would you eat them and put your body under intestinal distress? Diet items are known to become addictive and be worse for your body anyway, so people who are eating sugar free substances to lose weight doesn’t work out.”

While many people do believe that sugar free and diet substances are supposed to be used as a weight loss, that isn’t necessarily true.

“I don’t think any sugar-free things are good for you. Most people want sugar-free foods thinking it’s less calories and healthier for them,” said a senior exercise science major, Sam Ahn. “Sugar free products contain the chemical Aspartame which basically is the artificial sweetener commonly known as Splenda. High doses of this chemical have potential to cause brain tumors. This chemical in your system slows down your system and metabolism which causes weight gain.”

According to Health.com, the main reason to stop drinking diet soda and to stop putting diet substances in your body is because it isn’t healthy.

“It confuses your body,” says Dr. Brooke Alpet, author of The Sugar Detox. She states that artificial sweeteners intensify flavors more than real sugar does, so over time your body senses become dull so naturally sweet foods like fruit aren’t appetizing anymore.

It could lead to weight gain, not weight loss, says dietitian Cassie Bjork. In a study, diet soda drinkers had a 70 percent greater increase in waist circumference compared with non-drinkers.

Sweetener is linked to headaches, Bjork also says. “I have several clients who used to suffer from migraines and pinpointed their cause to diet soda.”

Diet substances are associated with an increased risk of type 2 diabetes.

It even makes drinking alcohol more dangerous. According to research from Northern Kentucky University, using diet soda as a mixer with alcohol has the effect of getting you drunk faster. The researchers believe this is because our bloodstream is able to absorb artificial sweetener more quickly than sugar.

The warning label on the bag itself says “Warning: The consumption of sugar-free candies may cause stomach discomfort and and/or a laxative effect. Individual tolerance will vary. If this is the first time you’ve tried these candies, we recommend beginning with one- fourth of a serving size or less.”