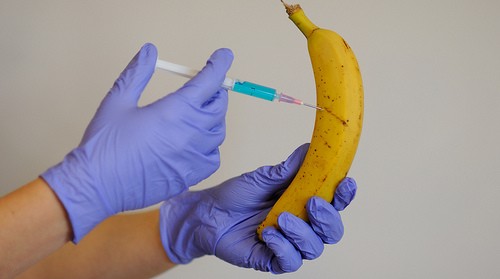 Everyone loves a good banana from rambunctious toddlers to toothless octogenarians.  You pick a big yellow one from the bunch, peel back its thick oily skin to expose the familiar off white flesh, and as you’re enjoying the mushy goodness consider that this banana may have gotten its genes altered in a laboratory.  Would you be able to stomach another bite?

The world’s banana supply is disappearing at an alarming rate due to a fungus threatening crops in the world’s key plantations. Fusarium oxysporus has the farming community scared, and it has a right to be afraid, as this fungus has previously wiped out the world’s main banana variety back in 1950.

How do we fight this tiny foe and protect millions of American’s from losing the quintessential Frosted Flakes companion? The most controversial solution being suggested is genetically engineering fungal resistant varieties of the fruit. That’s when the fear sinks in, because when people hear anything about genetic engineering it conjures up images of a mad scientist holding bubbling Erlenmeyer flasks and laughing manically.

“I don’t think I like the idea of a scientist making my food in the lab. I’d prefer to think that my food came from the ground, the soil, naturally,” said Lenise C. a senior studying physical therapy.

Just with anything else, the fear is usually due to a lack of understanding, however even after getting a comprehensive knowledge of the process; it’s still difficult to choose a side. Genetic modification is defined by Webster’s dictionary as “denoting or derived from an organism who’s DNA has been altered for the purpose of improvement or correction of defects.”

Modifying genetics is not a modern phenomenon. In fact, Americans wouldn’t have the produce they enjoy today without it. The ancestors of bananas were tiny, full of seeds and virtually inedible but with farmers taking advantage of selective breeding, they were able to manipulate the genes of plants to create bigger and better offspring.

Taking a stance on the issue without the background information on the science behind genetics can lead the public to fall prey to fear mongering campaigns or overzealous scientists leaving conveniently out facts. Like forgetting to mention that there may be unknown consequences that they haven’t foreseen or even that other companies may use the technology in a way that could be dangerous.

Most processed foods contain some genetically modified organisms, and your kitchen is more than likely littered with them. Soy and corn are the most prevalent sources of GMOs with the USDA reporting 94 percent of soybeans and 75 percent of all corn produced in the United States being modified.

Now imagine how much food is made with corn and soy, such as the addition of high fructose corn syrup and all those “super healthy” soy products consumers pay so much for.  The thought that shopping at Wholefoods is protecting you from GMO’s is a joke. The only GMO products that are not legal to be produced in the United States are meat products, however those animals are allowed to be fed GMO’s grains.  The fact that the American public is already consuming these products is frightening to some.

“ Oh my god. Don’t tell me that. I’m exactly the type of person who hates hearing things like this because I get so paranoid about it. I didn’t even know they were doing that. It’s really scary to think about,” said Vanessa Bigaud, a senior studying Health Science.

The fact that we are already eating so much of these modified materials speaks volumes of how much trust and research has been put into the science behind it. But expert accuses big corporations using GMO’s not to want people to get sick, because when it comes down to it, the deceased don’t buy Oreos.

The first batch of genetically engineered seeds rolled out in the ’90s by a company called Monsanto Co., and many GMO’s suppers believe that the way they were introduced was a mistake. Without giving the public the first hand information and only marketing to farmers, when the average American could argue that they are being misled.

“It was a monumental blunder the way this technology was rolled out. They marketed it to the farmers and the farmers saw the benefit but to do something as intimate as our experience with food we put it into our bodies we feed our children we want to trust our food,” said Phillip Bowles, an alfalfa grower.

Monsanto created a type of seed that had the genes of bacteria that would work to fend off pests, which in-turn lowered the amount of pesticides used on the crops. People aren’t as troubled by GMO’s when they are exchanging plant genes with other plants, however many aren’t happy with the fact that bacteria genes were now being placed in their foods.

“I think that’s crossing the line. When you are using the genes of two species of a plant, I can understand that but to combine two different species of organisms, you can’t predict what could happen if we were to ingest it down the line,” said Bigaud

Although any basic biology course will teach you that not all bacterium are harmful, it’s a huge task to change the public’s view of what they see as unclean and pathogenic.

“I don’t think it’s bad if you were say crossing a banana with another banana, but if it’s with another creature, it’s weird and turns it into something totally different kind of like a hybrid,” said Chriese Pringle a senior studying clinical laboratory science.

The prospect of not knowing what foods are considered GMOs is the heart of an ever growing controversy brewing about forcing companies to label their foods as GMO, which is a move corporations fear will dramatically decrease the sales of some of their products.  Due to the fact that companies are not required to disclose whether or not they use GMOs it is impossible to say definitively which corporations engage in this practice. The suspected advocates of GMOs are Hershey’s, Nabisco, Nestle, Nature Valley and Frito are just the tip of the iceberg on an ever growing list. It is alsoimportant to note that in order for food to be labeled as organic, it cannot contain any GMO’s.

“I want to know what I’m eating. I think we all have a right to know what you’re eating, and we deserve to decide if we want to eat something that has been genetically engineered,” continued Bigaud

All this talk of GMOs leaves the public wondering, does this benefit the public or does it just line the wallets of big corporations? That argument remains valid, however there are benefits to some genetically modified organisms. For example due to the high incidence of vitamin A related deficiencies in some parts of Asia where rice is the main diet staple, scientists have created a grain of rice enriched with vitamin A.

The enriched rice had been spliced with the genes of carrots, melons and other produce high in vitamin A. The enriched rice has a higher level of beta-carotene, which gives the rice a golden hue. The purpose of the rice is to prevent blindness and other diseases plaguing third world countries and is considered a humanitarian aid to end hunger and sickness, but even that is being met with protest.

Whether it’s saving the world’s supply of bananas or keeping yoga studios stocked with soy milk, the ability to scrutinize the genetic variety of your food is a luxury many cannot afford to have. An estimated 640,000 children will die under the age of five due to deficiencies in vitamin A, and this is clear evidence of how some forms of genetically modified organisms can begin aid people all over the world.