The Kegs Been Tapped

As Baby Boomers age and college student finally earn the right to drink names like Bud, Miller and Coors are becoming less popular 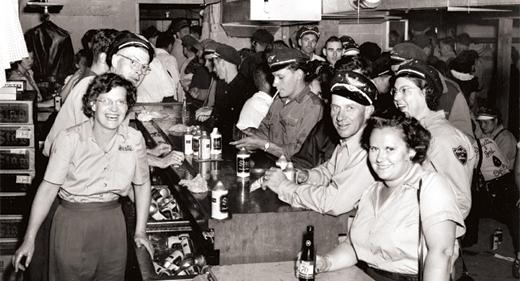 It has been long after the music died and Baby Booming young bloods are now grandparents, reprimanding our choice of song and griping of better days. They have given up their poodle skirts and 1970’s pants suits for us millennials to claim as vintage finds with the hopes that we will also inherit their aversion for beer, which so strongly clashes with our tipsy college lifestyles.

Gallup’s annual consumption habits poll asked young adults to pick their poison – beer, wine, or liquor. Unsurprisingly, millennial’s incessant obsession with Patron waving rappers has pulled them from their bar stools and to the nearest table with mixers. And while we all wish to believe we have a “preference” at this young age, the harsh reality still remains that we would drink whatever you have hidden in the back of any dorm room closet.

Somewhere between the 1950s and now, intoxication became a race, and an entire generation’s mentality changed. With empty pockets college kids asked, “What’s going to get us super drunk for super cheap,” and the world slurred back, “tequila and craft beer.”

Despite beers lasting-tradition, a Gallup survey showed that drinkers are no longer reaching for conventional six-packs like Bud and Miller Lite, but have taken to artisanal brews. Both demographics, Boomers and their 21 century successors, have taken to craft beer for the same reason eight year old orders rainbow sprinkles on their ice cream Sunday.

Are we even surprised that regaining status has so much to do with what’s in your cup, or what that cup looks like? It is by no coincidence that our reach for status has now surpassed skinny jeans and has overflown to the style in which we drink. While Santana Sex Panther’s Double Chocolate Ale adds an element of allure and hints at your attempt to classily get wasted, Coors simply implies the need for a Ping-Pong ball. Yet still, we smile, steal one from whoever bought it, and chug on.

However, as hasty as we are to down the first watered down pilsner we see, boozing in vogue has other royalties that may falter the tradition of cheap brew. Most craft beers contain anywhere from 5 to 10 percent alcohol per volume verses their traditional counter-brews like Budweiser that’s only packing about 2.5 percent. If you do the math, it would take four classic ales to achieve the quality buzz one bottle of Sex Panther is casually working on.

Like liquor, craft beers serve as a shortcut to Saturday nights buzz but ultimately save you from Sunday morning’s buzz kill. The only thing worse than waking up next to a stranger you met last night is the crinkled receipt reminding you of the round you bought the bar with money you didn’t really have. Buzz kill. Though last nights’ choices may cause confusion, your choice of an artisanal beer remains quite logical. Drink crafts, spend less, and get drunker. And that’s just about as much logic any 21 year-old needs while at the bar.

Even with the assumption that these aging Baby Boomers have converted to a more sophisticated taste and are now coiled up in their lazy boys sipping on scotch, the decrease in overall beer consumption is not without a shared shift in preference from Millennials also.

Patrick Mendoza, one of the few Mercy students who is actually legal to drink, recalled not one, but a list of 13 of his favorite beers, most names that only a true brew master would’ve heard of. As for his classmates, Alan Wagner and Dominic Sartario, they are just as pleased with whatever they could get their hands on. All of their selections were somewhat expected as beer is stereotypically a man’s drink, while women rather cross their legs and enjoy a cocktail or glass of wine.

Shev Simpson did little to disprove that cliché, eye rolling at the groups mention to Guinness. “Typically I drink Ciroc, but I’m Jamaican, so I have to have my white rum. Guinness is for the guys.”

With the staggering decrease noted in Gallup’s survey, it is hard to say Simpson is wrong. Gallup reported a 30 percent beer decrease in the 18 to 29 demographic since the early 1990s. But here’s where it gets confusing, Boomers have only dropped five percent, and drinkers 50 and older have remained the same. By 50, it’s pretty safe to assume you are set in your ways and will go out with a Coors in your hand before forcing down a Manhattan. 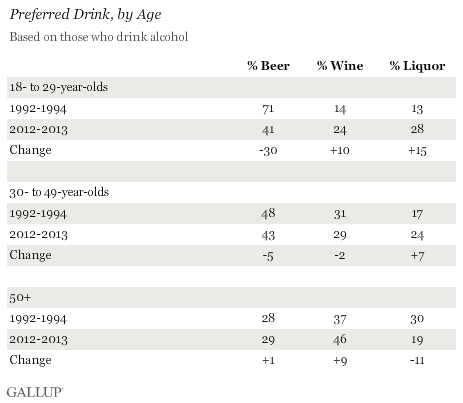 Our stooping percentage may be due to our lack of loyalty to one beer, but more commonly it comes down to searching for something that will surpass our buzz. In this persistent era of enhancement and indulgence, millennials are ironically drinking with the times. There is nothing Lite about our society, so we aim to drink heavy.

Though Gallup’s survey theorizes young adults are consuming less alcohol, Mercy’s students seem to feel differently on the definite switch to crafts and liquor store favorites. It boils down to how much bang you’re going to get for your buck.  Before spending extra money, youngsters would rather throw back four shots and be done with it. It’s no secret millennials are recognized as tree hugging freeloaders, shortcutting their way to instant gratification.

Why would they drink any different?