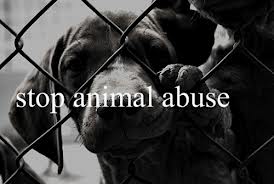 We’ve all heard the Sarah McLachlan song, “Angel” that plays when the SPCA End Animal Cruelty commercial plays. For the next two minutes, viewers become enraptured by the images of the abused dogs and cats and feel compelled to do something to help them. When the commercial ends, they all resume back to watching the useless reality show and forget about the abused animals.

Why is it that they are millions of animal lovers yet the abuse seems to escalate?

Michael Vick made headlines when he was found to have trained over 50 pitbulls who were then used for vicious dog fights. According to Rescue Ink New York, over 10,000 dogs die in illegal dog fighting. For those who are dog lovers, knowing that these dogs are abused and trained to fight other dogs have us wonder why this is going on. But what are we doing about the abuse towards animals?

Statistics show that dogs are the most common animals to be abused, followed by cats. Slaughterhouses and cattle auctions have also been revealed to show numerous cases of animal neglect.

Suresh Singh, a senior at Dobbs Ferry studying Veterinary Technology, mentions how the abuse of animal keeps escalating. “Sometimes there are just sick people out there that get a thrill from abusing animals. Some studies actually state that there is a strong correlation between domestic violence and animal abuse cases.”

Matt Lento, a senior at Dobbs Ferry studying psychology, adds that “it could be from a psychological standpoint, to get the power that they never had as a child by finding something a bit more defenseless.”

Unfortunately, the abusers of animals don’t get sufficient punishment for their horrific crimes. Some even manage to get away with punishment due to the lenient laws concerning animal cruelty. New York is known to have less strict laws for animal abuse. The Animal Collision is trying to push for stricter laws including anywhere from four to six years imprisonment and fines up to $30,000 for using animals in a fight.

Animal cruelty is a crime and stronger laws mean tougher penalties. Write letters to legislators, have signature petitions and supporting your local animal rescue organization are proactive ways in being the voice for the abused animals.

The ASPCA is a great website to learn how to detect if an animal is being abused. Some suggestions include educating others on treating animal with love and respect, supporting your local animal shelter to even starting a neighborhood watch program. Getting a photograph and a written statement of what you see can help to make your case strong when reporting cruelty.

The students at Mercy College can help to raise awareness of animal abuse in a variety of ways. Singh mentions that students should “say something if they see something. Also, by not supporting cosmetic products that utilize animals to test their products we can try to push these companies to use more human methods of testing the latest in fashion trends.” Even having a fundraiser can make a difference, he says. Not only are you educating others on the dangers of animal abuse, you’re making a difference in an animal’s life.

While you think you may know the effects of animal abuse, there are so many harmful acts occurring each day unbeknownst to us.

“Why should I care about animal rights?’ may be a thought occurring in your head.

As mentioned earlier, you may think about it when you see a commercial but once it’s over, you go back to what you were doing. Animal cruelty is a serious topic and needs to be resolved. In order to do so, more people need to be concerned for the other living creatures on our planet.

When you’re on several social media sites, post a link to the ASPCA to get others involved in the fight. If you’re looking for volunteer opportunities, join the local animal shelter.

Suresh decided to major in Veterinary Technology because “with veterinary medicine, I feel that I accomplish that goal to heal those who cannot speak for themselves. It’s really rewarding to help in the recovery of the patient, whether a dog, cat or any other animal.”

As college students, we should be more active in supporting causes we care about. For those animal lovers, this is a great cause to take up and you could make an example of yourself to others by being a great pet owner and voicing your concern about animal rights.

Instead of checking out tweets or watching reality shows, take a few minutes out of your time to read up on animal rights. The ASPCA and other websites are only a few clicks away.