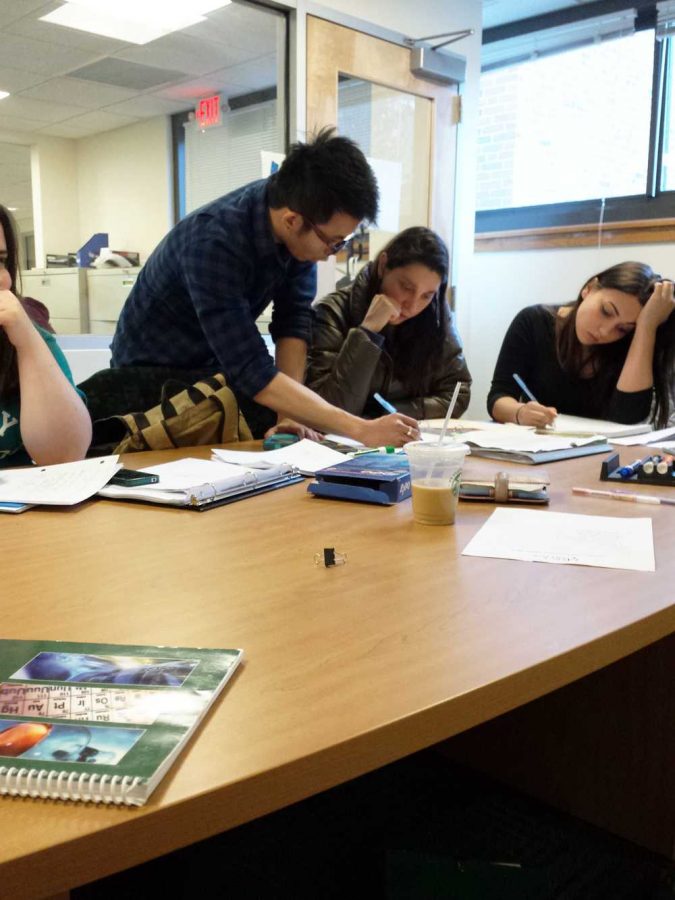 Mercy College is proving they are committed to providing their students with every opportunity to succeed by piloting a supplemental instruction program that features a peer-led group study.

The program focuses on difficult courses that have high failure or withdrawal rates. Currently, the program is only available for two courses, general chemistry and foundations of computing.

The sessions are led by supplemental instruction leaders who are students who have previously excelled in the courses and were recommended for the position by faculty. The SI leaders attend the classes and get a personalized view of the curriculum which allows them to give students a customized tutoring experience.

The SI leaders also coordinate with instructors to provide an experience which mirrors the classroom environment.

“The tremendous support from the faculty and staff has given the program a strong start,” said Marienela Veshtaj, an SI leader for general chemistry.

The program differs from traditional tutoring by offering students a classroom-based group study from one of their peers, which allows for a more relaxed and productive atmosphere.

Currently there are two SI leaders who specialize in chemistry, Veshtaj and Patrick Wimonsri, and one SI leader who specializes in foundations of computing.

“The SI leaders will also be able to have a better idea of what a student is struggling with, often times students may be too intimated to ask a question in such a large environment as a lecture hall, the SI sessions allow them to ask questions in a more intimate setting,” said Steven DeRosa, SI Coordinator.

The SI leaders also provide students with tips, such as note taking and skills on how to effectively take exams and study. Currently sessions are being held on the Dobbs Ferry and Bronx campuses.

The Dobbs Ferry sessions are held in the learning center, with SI leader Patrick Wimsonsri. The boisterous library leads into the serenity of the learning center, the sessions take place in a room just the right size for a group of about 10 students. Students are then welcomed by the friendly smile of Wimsonsri and then greeted by the other members of the group who have built a rapport with each other.

“I usually attend both sessions, and have been coming here since the beginning of the semester,” said Rachael, a STEM major who admits she has a tough time in chemistry.

General chemistry is one considered one of the most difficult courses by many students. Chemistry combines skills from algebra, geometry and physics. New skills unique to chemistry also contribute to why students are easily disenchanted by the daunting task that comes along with mastering chemistry.

“I hate chemistry, it’s very complicated and gives me a headache,” said Martha, another STEM student who frequently attends the sessions.

That opinion of chemistry is mutual between all the students at the session, each describing their hatred for the subject. Although it is clear after attending the session that they all end up having fun after solving problems correctly under the tutelage of Wimsonsri.

“I hate chemistry. I swear I’m really smart in other subjects, but I just feel really stupid in chemistry,” said Racheal, visibly exasperated after seeing the multi-faceted steps of solving a stoichiometry problem.

Although Rachael frequently expressed her distain for chemistry, she was one of the most active members of the session, asking questions and participating in solving exercises. Unafraid to stop the session and admit that she was lost; at that point Wimsonri would step in and guide her through her confusion. The most rewarding part of the sessions is watching a student become thrilled when they realized that they had solved a chemical equation correctly.

Wimsonsri’s tutoring style is well received by his peers. He goes over equations one by one and reminds the student of relevant concepts to keep in mind with little quips to help them remember.

“You guys remember what I told you guys about limiting reagents?” Wimsonri asks as the group collectively nods in approval.

When the students are stuck on an equation, Wimsonri doesn’t give up the answers right away and encourages the students to try it themselves firmly asserting his belief that they can master the material. Even encouraging them to come up to the board and solve the equation.

“Come on guys, I know you can do it. You don’t believe it, but I believe in you. One thing you guys need to have is the confidence to try it,” said Wimsonri.

Racheal responded with “I’m afraid of getting the answer wrong,” with Wimsonri replying, “There is no right or wrong as long as you try.”

The personal attention each student gets along with encouragement from a fellow student who has been in the same position is invaluable to building a student’s confidence which is a vital part of academic success.

Wimsonri also uses other methods to get his group to have the basics in what he calls “the long story short” which is how he ends his session, where he goes over a basic fact in chemistry that is crucial for students to master at this level. This time, he gave a quick explanation of the significance of the order of the elements on the periodic table.

Wimsonri goes the extra mile by providing his students with packets filled with practice problems.

“I love his packets, and the way he goes over everything and breaks it down, it’s so helpful,” says Rachel. “I just wish we had more time with him. Sometimes he even stays late.”

Chemistry is a subject that is the cause of stress for many students which is part of the reason why Wimsonri tries to keep the mood light, occasionally cracking jokes or even telling a story to get the students smiling again. He also uses real world examples like referring to balancing chemical equations to money.

Students also agree that the SI program works for them partially because the SI leaders sit in on the lectures and know what material has or has not been covered unlike the tutors.

According to Veshtaj, the program also benefits the SI leaders by allowing them to review their own skills and grow from the experience.

“The program has been an incredible experience. Supplemental instruction is an academic support program for students, but the leaders have much to learn from the students as well.”

The program is very popular among its participants and is expected to grow to offer much more opportunities in different subjects.

“We hope to expand the program in the future to reach more students, especially in other subjects where students may be struggling,” said DeRosa.

With the program being marked a success, there will be an opportunity for other exceptional students to help their peers, which Veshtaj recommends.

“I strongly urge students who have the opportunity to become peer leaders to take on the role. The best way to learn is by mastering explaining a concept through various approaches,” said Veshtaj

SI leaders also recommend students take advantage of the program; the best way to improve your grade is to seek help early in the semester. The program is a laid back approach to difficult concepts explained by peers who understand the frustration and provide interactive and fun ways to look at the material.
“This is exactly what interactive learning provides – a chance for students to work together and exchange problem solving skills and strategies,” said Veshtaj.