Mercy Enactus: Dedicated to making the world a better place 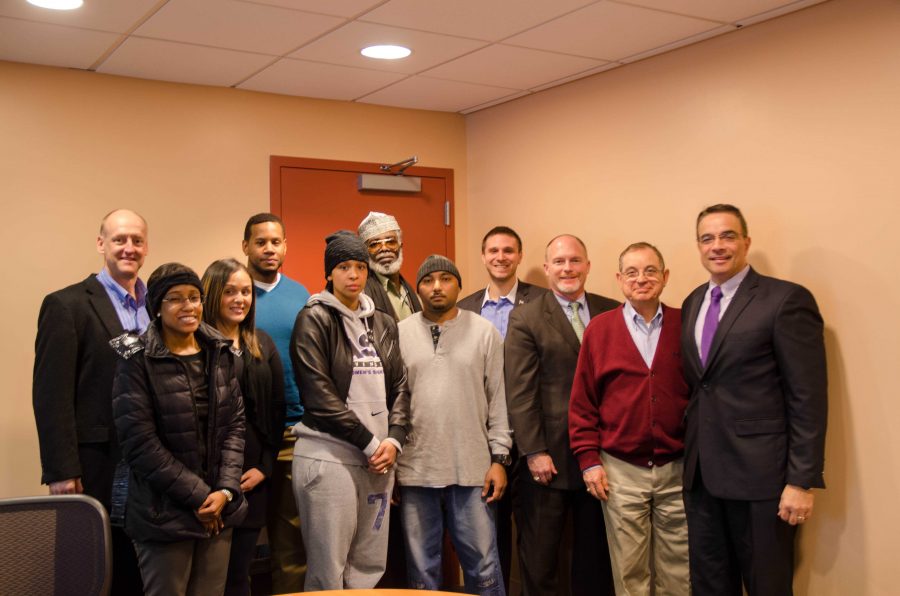 That is what Enactus stands for; the newly found organization on campus.

Enactus is an international non-profit organization that brings students, academic and business leaders together. These people are all committed to using the power of entrepreneurial action to improve the quality of life and standard of living for people in need.

Plenty of schools have their own Enactus “chapter” which helps creates its own businesses. The goal is to create a business or businesses that help the environment, economy, and/or society, all while being sustainable.

Mercy Colleges Enactus team is called Mercy Enactus, and is open for anyone in school to join. They are working on Studio 7 Music, Operation Employment and Empire eCycling. They are also going to a nation competition in Cincinnati, Ohio from April 1 to April 3, 2014.

“Enactus has empowered students to create, operate, and sustain a real business. Enactus really should be required for any entrepreneur majors,” explains Sam Moseley, a member of Mercy Enactus. “It shows students what it takes to create and operate running businesses. Most of these companies aren’t large, but they are still companies. Name another club or organization that allows students to have this much power!”

Studio 7 Music is about taking musical instruments and customizing them to fit an individual with disabilities so they can experience the joy of music. The Mercy Enactus team is currently conducting market research to determine what demographic they can make the most life changing impact with.

“We would love to create a special education music program that schools can implement nationwide using our instruments and also allow parents with children with disabilities to purchase these instruments for home use,” says Anthony Sicuranza, Jr., the chief executive officer of Mercy Enactus.

Operation Employments goal is to enable U.S Armed Services personnel and veterans to obtain employment by building on their military skills and providing them with the skills needed in a competitive job market.

This is a not-for-profit organization that looks for people who are at the end of their enlistment and unemployed veterans.

Mercy will offer five three-hour workshops taught by business professionals that each focus on a specific area of business such as resume building, cover letters, Microsoft Word, Excel, PowerPoint and basic finance.

The last project that they are working on is called Empire eCycling. Mercy’s’ team is trying to raise awareness and collect hazardous materials while diverting them from landfills where they can cause harm to proper recycling channels.

They are trying to let people understand that is illegal and unethical to simply throw away their electronics in the garbage without properly recycling them. For every five computers that Mercy Enactus recycles, they will donate one to a family in need.

“Enactus is a great way for students to gain entrepreneurial experience while helping society,” explained Chief Executive Officer, Sicuranza. “This is the American dream. We create private sector businesses that tackle the tough societal issues of today – poverty, climate change, unemployment, and so on. There is no better feeling than knowing you played a part in changing the world.”

The passion that the members of this organization have since the start of joining is moving. All of the members are avidly involved around campus and are exstatic to be a part of the Mercy Enactus community.

“Ever since I was first introduced to the Mercy College Enactus Team, I was instantly inspired and I had one question on my mind. How can I get involved?,” said Thomas LeRoux, another member of Mercy Enactus. “To be a part of something that touches so many lives and does so much good for the community is really important to me.”

After the semesters of hard work, Mercy’s’ Enactus is competing in a national competition. It is called the 2014 Enactus United States National Exposition. They will be competing with over 250 different schools.

This exposition gives schools the chance to exhibit their results to Enactus and demonstrate how socially, economically, and environmentally responsible they have been.

“Enactus is a global organization that teaches students skills in business while also doing social, economic, and environmental good, says Ryan Chand, the Chief Operating Officer of Mercy Enactus. “This organization has taught me what it means to be a part of something bigger than myself, and to work hard towards a goal that will ultimately help our community and the world we live in.”

With Mercy’s very own students being on the team, the Vice President and President have high hopes for this year.

“There is a saying that originated from Dr. John Gonas at Belmont University in Nashville. He says the goal of an Enactus team is three things: ‘1. Bless the community, 2. Bless the students, 3. Be competitive, and when the first two things are achieved, the third will automatically fall into place,'” Sicuranza tells The Impact.

“This is exactly true. Our number one goal is to help our communities and solve a societal need. Second, we help the students by giving them exposure to real business and the opportunity to start their own business, and finally we compete in national competitions.”