What a Drag: The Dangers Of E-Cigs 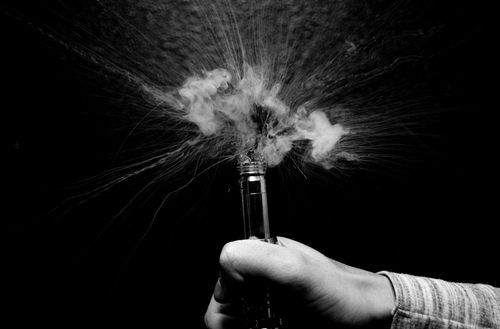 It is one day before Spring Break and Richard Handler cannot get out of Main Hall fast enough. He would’ve seemed out of place in his pajamas had the rest of Mercy’s dormers not been wearing variation of his exact outfit. But he gains an element of separation in a South Carolina Gamecock sweatshirt. I guessed he wasn’t from up North by this, his smile and casualness in which he addresses us. Southerners always seem to have a friendly air about them.

“Can I buy a cigarette off you?”

Southerners also have a funny way of getting what they want with a smile and casual air in which they address anyone. Still keeping a friendly buoyancy, he takes a cig and lends conversation rather than a dollar. Real smokers don’t make you pay and Ash Fishetti, my original subject, was a real smoker.

It may be 2014, and society may be more health conscious, but there is still a “coolness” about a real smoker. They know just how to hold the cigarette lazily against their index finger, talk with it bobbing half from their mouth and exhale out the side without missing a syllable. She had all that, and the shades. From behind her Ray Ban’s, she had been telling me of her past couple moths spent waning herself off cigarettes before Handler had interrupted.

“I have those E-cigs, but look how well that is working,” she laughs as she takes another drag. 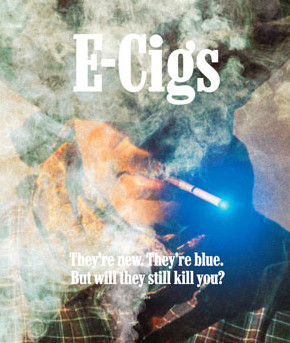 Electronic cigarettes made their first appearance as early as the 1960s. Some laughed; others were intrigued and most considered them the salad to lung cancer; the healthy fix. But surprisingly these electronic substitutes, which truly caught their following in the mid 2000s, have caused more controversy in the past couple months than regular tobacco filled cigarettes. They have gained a loyal following, but also a deadly stigma.

Inhaling vapor as opposed to the damaging chemicals in a regular cigarette is an obvious health improvement, that much is clear. But the contents inside these nicotine concoctions may not be what buyers expect. For years now the FDA claims to be taking action in efforts to regulate these E-cigs but have failed to make any real progress on account of petty definition of  a “tobacco product.”

For now, the Tobacco Control Act, which gives the FDA the authority to regulate certain categories, is still only monitoring the use of cigarettes, tobacco and roll- your-own cigarettes, not electronic smoking devices. Here, we hit a sketchy and uncrossed mile stone in the tobacco industry. The FDA is quick to confiscate a personally rolled smoke before prying the back doors open of smoke shops, mixing their own personal poison at an escalating price. Smokers are taking their chances when toking on a Newport but they may be taking even greater chances when choosing liquid nicotine from the wrong store.

The electronic cigarette industry has already vaped its way to the top, making it a 1.5 billion dollar industry. One would think this would catch the FDA’s attentions, but apparently you have to drop the decimal in order to create some real awareness.

One of the benefits to vapor cigarettes is that the consumer is in control of what they are smoking, questionable mixing aside. Like most other electronics, vape smokers are drawn to the element of individualism. The liquid allows the smoker to add or delude the nicotine content in their vapor as well as pick a flavor preference. And these days there are a lot to choose from.

For most the flavor is a perk, but Fishetti says it’s the feel that sent her back to the pack. “They just feel different. It messed with my muscle memory and they tasted like grape. I didn’t like that,” she shrugs, turning to the rest of the circle.

Handler has made some progress on his borrowed cig. Carrying on in smoker’s small talk, he asks for our names and elaborates more on his own. “Rich Handler, you know what the abbreviation for Richard is don’t you?” he waits while the menthol trails. “You can call me Scooter,” he says with tired eyes.

His suggestive comment may have put to rest any lingering assumption that he may be a southern gent but the way he laughed at it himself only made you happy he had a nickname and didn’t have to call him Dick. I’m sure he wouldn’t have minded anyway.

“I normally smoke Newports. I have for twelve years.”

He is only a freshman and has sneakily slipped under the radar as a lifetime smoker by the youngness in his voice which masks the scratchiness. He says this with no shame, almost with pride. “I’m on my way to get my vape now. I like it because I can make it stronger than my smokes.”

In the midst of this electronic revolution, many smoke shops have made a rather half-hearted transition. Organic and enclosed vapor may be the only safe way to vape. Others draw customers with promises of pure mixtures, and flashy flavors, but the lack of regulations leaves room for a fruity mixture of olive oil and water coloring. 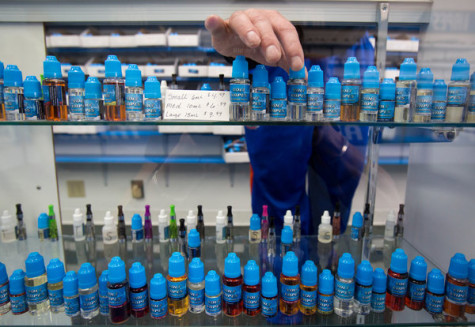 Cases of ill-mixed vapors have resulted in death and new extreme methods of reaching a high. Some smokers, ones who are out for a dramatic kick rather than a smoking alternative, have taken to smoking alcohol vapor. Videos of alcohol vaping have come viral and have even led to legal marketing of the Vaportini. When alcohol is injected the body has the ability to reject unwanted amounts of alcohol. However, if alcohol were to be inhaled, the body no longer has control over what is going where, spreading the toxic vapor through the lungs and to other areas of the body. In the absence of regulation, the new fad threatens all possible health benefits of vaping as a smoking alternative.

Questions of the electronic revolution are still being raised with little sight of solution. Will the FDA sit around for another year with smokers unknowingly inhale rum and coke? Or will it further debate the importance of rising revenue over ill-infused vaping death tolls.

It’s a sad day when a Newport is considered the lesser of two evils.