Pulling up truths in America’s Garden 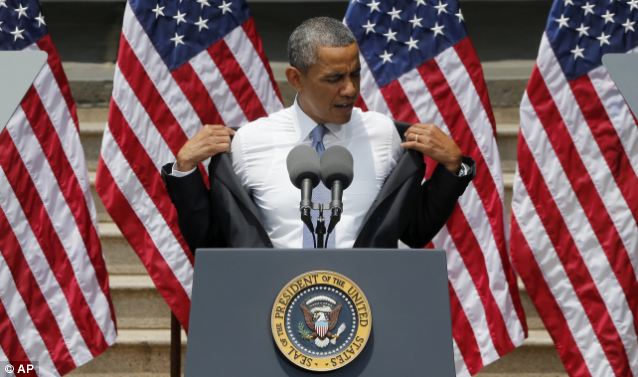 Becoming a singing icon happens quickly, but becoming a retired singing icon sometimes happens even faster. The good ones become multiplatinum record holders, dabble a bit in Hollywood, rock a few tours and then decide to become a judge on America’s Got Talent before coming back for a “final tour”…and then another, just in case anyone missed the last “final tour.”

There’s no shame in that.

It makes sense that they’d want to go out with as much buzz as when they came into the industry: young and sober. The Eagles did it. Queen did it. Most of them went out with flare. Cher did it in a rhinestone thong for Heaven’s sake.

He is playing his final song of his second final tour and is picking now to pull out a secret track. He wants to go out on top, basking in his fading impact and flame throwing policies as he goes.

Rolling Stone Magazine recently reported on President Obama’s focus on Global warming, expressing that, “right now, coal-fired power plants generate about 40 percent of the electricity in the U.S. and are by far the largest single source of heat-trapping gases.”

Little by little, Obama has tweaked the nerves of the four promises he made when taking office in 2009: boosting the economy, withdrawing from Iraq, affordable healthcare and this year’s single, climate control.

It’s been some time now, and Obama’s mistakes are no longer potential flops, but unraveling truths. He’s hit a few high notes and sang a few stinkers, leaving his final term as the one he wants the people to remember him by.

Based on opinions we’ve already formed of Mr. President, there is still one factor allowing us to sympathize with the fact that he sat the stall with no toilet paper. As a result, “we the people” are in a long line waiting for him to piss or get off the pot as a leading voice of environmental conservation.

So we wait and tap our feet, looking for action but neglect to see what we can do as individuals to pass the time. Since before Al Gore made global warming a science class staple, environmental activists and nature enthusiasts have preached the practice of conservation to a nation full of empty pews; half from skepticism and probably more by not wanting to wake up early to a controversial awakening.

Regardless of the day, one irony we can be sure of now is that nature is a business. And if America isn’t buying, Congress isn’t selling.

Paradox as it may be, the price for a more natural Earth comes with a pretty shocking price tag few Americans are willing to splurge on. Both Democrats and Republicans have added Ethanol research to their platform in efforts to “save energy and conserve the environment.”

Any matter turning environmentalist and politicians into cohorts seems a subject worth acknowledging, yet so many still stand with their back to the issue. Nevertheless, the friendship raises suspicion, and questions how much this method of saving is really going to cost?

While environmental conservation may have gained awareness, and the depiction as a cultural trend. The real cure for a cleaner environment comes down to clarity. Conservation confusion looks more and more like the real reason as to why many households still view recycling as optional.

As it turns out, it takes just as much energy to make ethanol as it does to burn it. It takes fossil fuel to makes the fertilizer for corn, which ethanol is made from. It takes additional energy to move and transfer the ethanol which cannot be exported by pipelines like oil, but by larger gasoline polluting trucks.

The mission towards going green has become muddled by the ulterior motives of politicians and the myths of nature fanatics. It’s no wonder people choose to ignore the importance of conservation. Getting the true definition now requires you to pick red or blue before you can decide to go green.

States like Connecticut, New York, Massachusetts, and Maine have set recycling regulations that require you to divide your garbage from your recyclables like glass, paper, and plastic. While the solution may not lie in ethanol, obvious improvements are being made by recycling. McConkey, a recycling company in Washington State claims to bring in 72 million bottles a year before melting them down and reusing them as other plastic products.  This process uses 70 percent less energy to make new goods and can recycle one bottle more than five hundred times.

While politicians look at issues from a financial perspective, Zach Gould, a young mind behind the eco-innovation, Agrowculture, agrees with McConkey’s approach to focus on cultivating a better earth.

“Our focus should be on long term sustainability,” he shares through quick breaths. He is riding home from work on his bike as any true environmentalist would. “Don’t worry, I can talk with one hand and steer with the other.”

This past summer Gould and the Agrowculture team partnered up with Energy- Biosphere-Food (EBF) in Germany to create a series of aquaponic solar greenhouses. Agrowculture and EBF urge the American people to “wake up and get out of our comfortable spaceships.”

These greenhouses are primarily meant to be built on the roofs apartment building to create an integrated food and energy system. “No one can deny global warming anymore. Agriculture is just as important. It teaches people to fend for themselves and how to create a world that will hold up for our children,” exhales Gould.

The seriousness in which he speaks is warmed by his laid back tone. He, like so many other are wrote off as tree-hugging hippies for the mere fact that they care too much. Gould feels as if the rest of society just cares too less.

“It’s more than just being able to grow your own tomatoes. These greenhouses are a base for civic networking. The activism of the ’70s is gone. People are lazy. If we don’t get active and create with others, we, as individuals, will waste away with the environment. It’s very much cultural and the sluggish attitude surrounding. It needs to change,” Gould states firmly.

Other establishments have already fallen in the footsteps of Agrowculture and EBF with rooftop gardens in the states. The Whole Foods in Gowanas, Brooklyn is scheduled to open their rooftop farm next fall.

Before hanging up, Gould left one final hope that online enthusiasm will soon translate into real life enthusiasm for our environment.

It’d be hard to say that the importance America places of physical improvement rather than environmental improvement is surprising. However, due to the 11 billion spent on face lifts, Botox and breast augmentations, it further supports some of the nation’s warped priorities. Some would rather have plastic injected into their butt before dropping it in the nearest blue bin.

Assuming that pain really is beauty, preservation must be money. Behind the speeches and neckties, the government is a business. To them, planting a flower no one will buy seems like another opportunity for financial failure. From a logical standpoint, it is hard to disagree. Today the question is not whether preservation is a necessity, but whether or not America is going to start taking it seriously.

The eco-revolution is one that has taken a while to trust as more than a scam and will only improve by individual efforts. Taking a note from Gould and Mercy’s own environmental club, Envisaj, could one day turn individual effort into shared effort.

Envisaj, like Agrowculture, have built a similar aeroponic greenhouse on Mercy’s grounds. The club recently attended Pleasantville Middle School for this year’s Earth Day and plans to spend the weekend cocooned in sleeping bags for a camping experience in Amish Country. Apparently, preservation costs money and a warm bed.

Not everyone needs to ride bikes home from work or road trip it to Amish country. But as citizen of the earth, Mr. President included, we need to ask ourselves-  how much ignoring environmental preservation will cost in fifty years? Vital resources may become wilted and past the point of revival. Cultivating a healthy environment tomorrow means starting today.

Let’s hope Obama has one last show left in him.