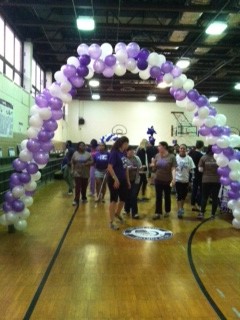 For the past ten months, a committee comprised of students and staff of Mercy College have been hard at work planning the school’s third Relay For Life event.

On April 26 and 27, a total of 28 teams with 177 registered participants, along with people from the outside community, gathered in the Victory Hall gymnasium to raise money for one cause – a cure for cancer.

After months of fundraising by all the teams, over $12,000 was raised.

The American Cancer Society (ACS) is a nationwide voluntary health organization that is dedicated to eliminating cancer. One of its biggest fundraising events is Relay For Life, and its mission is to improve cancer survival, decrease the incidence of cancer, and improve the quality of life or cancer patients and caretakers. It is estimated that Relay For Life events have raised almost $5 billion to date.

There are some common features at Relays even though the events are different. There is a Survivor Dinner, Survivor Lap, Opening Lap, Luminaria Ceremony and a Closing Ceremony. On April 26, volunteers gathered in the gym around noon to begin setting up for the long day ahead of them. Survivors and their families gathered in Victory Hall for the Survivor Dinner before the Opening Ceremony. At approximately 6 p.m., the festivities began.

“The opening ceremony couldn’t have gone any better. The two communities came together for such a great cause and showed so much support for one another,” said Elizabeth Berlin, Spirit Squad Relay Captain.

Throughout the night there were performances that also entertained the teams. A band of Mercy students, Road Not Taken, performed, along with Jerome Mabagos, who performed an acoustic set.

As the night went on, people began to get tired but kept pushing through and walking around the track. The DJ would put on songs that everyone could dance to. When The Cupid Shuffle came on, people ran to the middle of the gym to dance. If those who didn’t know how to do any of the dances for any song, could always look to the side and see someone to teach them. Everyone came together as a community to help everyone else.

“It was nice to see the people of Dobbs Ferry and Mercy coming together for a good cause,” said business major Tiffany Cordero said.

Relay For Life can be a very emotional time for some people, especially during the Luminaria Ceremony, which is a time when everyone gathers around the outside of the track to remember anyone that may have been lost, anyone who has survived and to anyone who is fighting cancer now.

Ali Germes, event co-chair, gave an emotional speech that brought many to tears. During the ceremony, the speakers list the months, and for each month in which a person has been affected by cancer, a glow stick is cracked.  After each month was read, you could hear the glow sticks breaking. This scene brought tears to so many eyes.

Teams were lined up around the track selling things such as food, jewelry, raffle baskets, and so much more. Some even had mini events throughout the night that other teams could participate in such as “Relay Feud” that resembled Family Feud, sponsored by Rotaract Club.

Later into the night and earlier into the morning, people began to slow down. They would get tired, but leave it to the DJ to put on up beat dance music and people found the energy to keep moving.

Before people knew it, it was 6 a.m. The final stretch. Fighting the urge to fall asleep, team members continued to walk, and some even danced around the track

Two hours seemed to fly by as the event chair, student Trevor Williams walked on stage to announce that Relay For Life of Mercy College had been a successful event. The committee thanked all the teams for participating as well as thanking the companies such as Walgreens, Rita’s Italian Ice and Dobbs Dawg House for coming out to the event.

Teams began to pack up their things, say their goodbyes, and head home for a well-deserved day of rest.  For 14 hours, members of the Mercy College community proved The American Cancer Society’s phrase, “Cancer doesn’t sleep, so neither do we.”