Ukrainian Student Troubled By The Violence In His Homeland 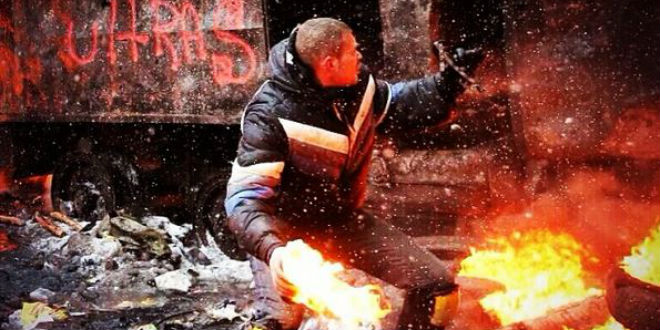 And like that, it was chaos. Firebombs flew. Protestors advanced on police lines. Government snipers fired and left dozens sprawling on the pavement. Blood stained the streets. Police were taken hostage.

The Ukranian capital was in shambles.

Even over 5,000 miles away from New York, Mercy students find it to be a most unfortunate loss of independence for millions who fought for their right to be free.

For Mercy College student Alex Kobryn, the thought of his country losing its battle for freedom is utterly terrifying.

“The whole situation is absolutely terrible and devastating. Putin is sabotaging everything. The Ukraine gained their independence in 1991, and for some reason they have also been fighting for it since then as well. Yanukovych and Putin are working together. Putin is a liar, a dictator, and resembles Hitler,” says Kobryn.

Kobryn, a junior at Mercy, is 100 percent Ukrainian. His grandparents were born in the Ukraine and then later moved to the United States during World War II. Although Alex has never visited the Ukraine, he hopes to someday soon in order to visit his numerous cousins, who all live in Sumy, which is the next region Russia has possible plans to takeover. Alex’s parents also find the situation terrible, saying they believe Ukraine will become a part of Russia because most of the elderly living in the Ukraine have sided with Russia, stating it is a strong country with strong resources. It may be inevitable, she says.

Some believe that the Sochi Olympics were a sleazy way for Putin to distract the public while he put his schemes into action. Proving the Olympics to be a calculated cover as Putin slowly invaded the Ukraine, Kobryn does not believe that it was a distraction, but more like “bad timing.” Sadly, the Olympics does look more and more like a cover for ulterior motives as more information unfolds. According to a Forbes article printed last month, “The incursion into the Crimea came just four days after the winter games ended. We now know that the head of Gazprom sold all his shares in the Russian state energy monopoly back on Feb. 11, which was right in the middle of the Sochi games.”

While this being a formative plan is not provable, the whole situation unfolding becomes more likely to be a ploy to distract the world from the wrongdoings.

According the Kobryn, “The United States should try harder to intervene in this situation.” While some 25,000 Russian troops still threaten the Ukraine daily, and more keep coming, Obama’s ideals of combating the aggression coming from Russia by means of economic sanctions and diplomacy is not going to be enough for Putin to change his mind in this problem.

The Crimean peninsula is located in the Southern regions of Ukraine, on the coast of the Black Sea. “Crimea” is the more common name for the Autonomous Republic of Crimea, which is part of Ukraine. The capitol, Simferopol, along with Sevestapol and Kerch, are the three major cities. The Russian government has always claimed that the Crimean region of the Ukraine should belong to them and the Ukraine is refusing to allow them to take it away.

Crimea is an independent region from Ukraine and has a population of around two million people, with over half of them ethnically Russian. Crimea was claimed by the Russians up until 1954, when Nikita Kruschev gifted it to the Ukrainian Soviet Socialist Republic. Ukraine eventually gained their independence from the USSR in 1991 and inevitably the Crimea became part of the newly formed Ukrainian nation. Julia Ioffe, a Russian-American journalist, gives an insightful explanation to explain Putin’s view of Crimea, “If you sold your house and the buyers accidentally got your car with it too, you’d want it back.”

Ioffe adds, “Putin has been looking for a pretext to take back his car.”

This year’s unrest in the Ukraine gave Putin just that.

The Crimea even has its own government, the Supreme Council of Crimea, and they voted to become part of the Russian Federation in March. This could have repercussions all over the world, not just in the European Union. The dollar has risen to a record high against the Russian Ruble, as investors tried to seek refuge in the U.S. currency as a safe haven from the volatile situation in Eastern Europe. The ruble fell to a record low against the euro as well as the dollar. The boost to the dollar, however, came at the expense of American stock markets, which suffered as investors pulled their money out of companies that could be impacted by the turmoil in Ukraine and Russia.

New York has the highest population of Ukrainian residents in the United States with over 150,000 people of Ukrainian decent in the state. Milla Jovovich a model, designer, and actress, was born in the Ukraine and came to America when she was seven years old to find fame in Los Angeles, and currently resides in New York City. Jovovich had first voiced her concerns for her birth country when the protests began. They took place when former President Viktor Yanukovych turned his back on a political deal with the European Union three months ago. Jovovich used her celebrity and took to Facebook more recently in the aftermath of the Russian occupation of the Crimea to raise awareness for ordinary people caught up in the violence. “I have no taste for politics, but I will do everything in my power to help the helpless, not the ones with guns,” she posted, adding, “I have always put my money where my mouth is when it comes to helping people, and you better believe I will find out what I can personally do for the victims of the violence in Ukraine.”

BBC UK writes that, “foes the world over seem to have concluded that Obama has taken the US military force off the table and made aggression easier.” Although Putin claims that The United States and Russia relations are crucial to this being a workable problem, Putin still sends more and more troops into Crimea daily. Russias Parliament has stated that they will welcome the addition of Crimea to the Russian Federation if residents will vote in favor of the proposed referendum to make all of this end. While it would end the attacks from troops, it would also be a loss of freedom for the people of Crimea.

Currently, according to CNN, President Obama has declared expanding sanctions against Russia, targeting President Putin’s ‘inner circle’. Since the meeting on April 17, in Geneva, Switzerland, Russia has done nothing to meet its prior commitments, and has further escalated the crisis without signs of slowing down. From CNN.com, “The Department of the Treasury is imposing sanctions on seven Russian government officials, including two members of President Putin’s inner circle, who will be subject to an asset freeze and a U.S. visa ban, and 17 companies linked to Putin’s inner circle, which will be subject to an asset freeze. In addition, the Department of Commerce has imposed additional restrictions on 13 of those companies by imposing a license requirement with a presumption of denial for the export, re-export or other foreign transfer of U.S.-origin items to the companies.” The United States departments of Commerce and State are constricting their policies of denying export licenses for high-technology items that could potentially be used militantly against Crimea.

While this situation seems to be heating up much faster than cooling down, there is hope that Putin and Obama will be able to reach some type of agreement in order to protect the freedoms of the citizens of Crimea and Ukraine. There is hope that the relations between the United States and Russia will not be harmed from this terrible situation. At the rate Russia is going, it appears as if they have no plans to make nice with the United States, or Crimea for that matter.

“This whole situation is letting the world know about us,” says Kobryn of his hopes of Americans being well-educated on this treacherous subject. “Even if you are not Ukrainian, even if you don’t have family there, this should affect you.”