Picking Up The Pieces After A Revolution 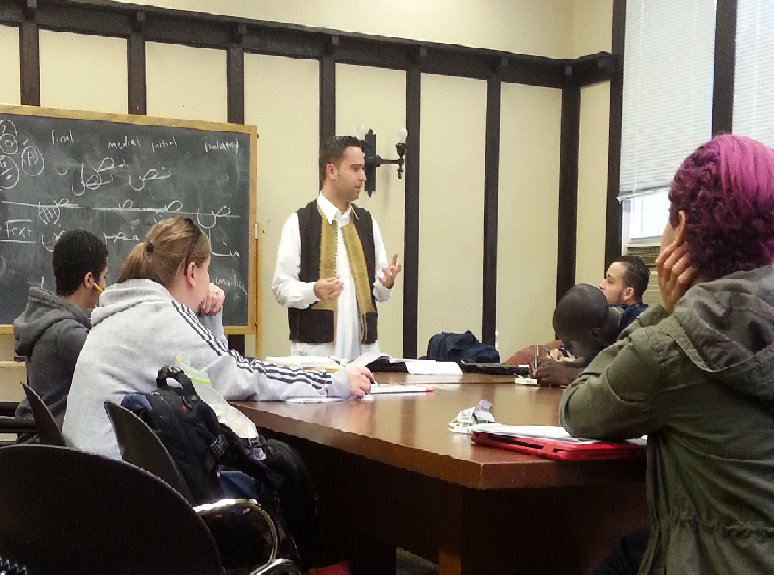 Missiles and rockets. Assasinations and political revolts. Living in Libya during the revolution creates a sense of contstant fear, but also the will to endure and make things better.

Few people in this country can understand the circumstances of living in a country where a dictator had been assassinated and political climate was turned upside down, but listen intently because Mercy College Prof. Khaled Abunaama has a story to tell.

Fortunately, life is better  now where Abunaama lived. But just a few years ago, the Libyan people revolted against Muammar Gaddafi in 2011 behind multiple international support, said Abunaama. “But the fall of Gaddafi’s brutal regime, which was designed as him as the center, left the country in a chaos with militias taking over after power vacuum.”

And the battles are still raging on in Libya, although Abunaama has stated the situation has greatly improved after reports from visits from a U.S. ambassador in Tripoli and the U.N. Secretary General in Libya last week.

About two months ago, there were some heavy battles between two militias to take over the Tripoli International Airport that created national headlines.

Libya went through a rough patch after the 2011 revolution. Many Libyans, like Abunaama, were optimistic about the uprising and were looking forward to a democratic country after 42 years of brutal dictatorship. However, militias who took over the country after the fall of the old regime have even made it worse for the Libyan people, says Abunaama.

Abunaama states he has no desire to move to the United States, or even wanted to leave his country. Yet he believed in the Fulbright program.

“I won the lottery for a Green Card last summer and I threw it away,” he said. “I love it there (his country), despite the war.”

“That exact night was one of the worst nights of my life,” explained Abunaama while telling his horrifying story.“I was so tired, and I went home to missiles falling all over my street. There were about five missiles that fell about a few meters from me. Two rockets fell over my neighbor’s house. I ran out of my house and it was all foggy because of the rockets. When I left, another rocket fell very close to me. By the time I was in my car and drove away, another rocket fell next to it.”

After applying for the program to come to the United States under the Fullbright Scholar program, Abunaama and a couple of other people were about to leave the country. Yet there was a problem. Unfortunately, the U.S Embassy was the location of the visa interview. Abunaama was prepping for the interview when clashes erupted between two militias in Tripoli. The clashes were located near the U.S embassy, which lead them to have no choice but to leave the country.

This is just the beginning of this tragic story.The embassy had left the country, and the scholars had to contact the IIE, which is the program sponsor.

“We suggested that we do the interview for the visa in Tunisia, which was the nearest country to us. Basically, we could have driven there. Yet we were informed that the U.S. embassy would no longer be supporting visa applications.”

There would have to be another way. The group then planned to travel from Tunisia to Morocco because that U.S. embassy would still honor visas.

“The first day I tried to go to Tunisia, the roads were closed. One of my friends worked at a small airport in Tripoli, but we couldn’t get a plane.”

He added that the airports were closed except for one small airport, which at the time was almost impossible to get a seat with the amount of foreigners trying to leave the country. The airport no longer became operational, and there was no way to fly out the country.

“Our only option was a path that was really dangerous because there were clashes in the road,” he said.

After delaying to strategically formulate a plan, Abunaama took action. He was going to drive through a town that was very dangerous, Warshefana, and was going to leave his bags with his another family that going to the same direction as his, so he wouldn’t get questioned about his bags, if they stopped him.

“I can’t tell you what happened that night because my mind was all over the place,” Abunaama said with a still face. That was the night that he got attacked by five different missiles.

Finally, he arrived to his destination. After days and days of traveling, he mad it to a hotel. After he stayed in the hotel a few nights, he kept having problems with the Moroccan Visa.

First they told him it will be ready the Aug. 22. Then the 28. Then Sept. 2. Although the U.S. Embassy in Tunisia doesn’t support visa application, involvement by the U.S. Department of State’s Bureau of Educational and Cultural Affairs scheduled a meeting to do the visa meeting in Tunis. By the Sept. 5, they conducted the interview, and with the scholars’ luck, there was system problems, so it took five days to get the Visa when it usually would’ve taken 48 hours.

At last, Abunaama was on a plane heading to America. Relieved and excited, Abunaama is thankful to have made it, although a little late than expected.

Abunaama is from the capital of Libya, Tripoli. He is an English teacher back home, and works at the specific training center for oil industries. He teaches Arabic 115 and 116 at Mercy College as well as taking two graduate courses.

Abunaama is in the Fulbright scholar program. Fulbright program is an international scholarship with a goal to increase mutual understanding and support friendly and peaceful relations from the people of the United States and those of other countries.

“To be a Fulbright scholar can open a lot of doors for you,” said Abunaama. “The program is a really prestigious. Few are accepted to this program.”

Abunaama explains his decision to apply to the Fulbright Language Teaching Assistant program was based on several reasons. One of the reasons is the lofty goal of the program in bringing people together in harmony despite of their different viewpoints and backgrounds. “It can make a magnificent combination of the world’s most amazing cultures and breaking down the barriers between them.”

Currently, various factions and Islamic militants are attempting to take over the country. When asked about how Abunaama feels about his country and the terms they are in now, there was nothing but positive comments.

“It’s peaceful for the moment,” Abunaama said with a smile. “Things are getting better, and no more rockets.”

Abunamma states that there are several positive qualities about Libya that are rarely discussed. There are the largest Roman ruins outside of Italy, and tourist attractions like the Leptis Magna, Sebrathah, Oea (also known as modern day Tripoli), Cyrene, Ghadames and Akakus Mountains.

“We have the best beaches in the world. There are a chain of beautiful lakes throughout the Sarah Desert, and many beautiful places. It is a beautiful country with very nice people. My goal is to always focus on the positive side of Libya before the revolution.”

He adds that the economy is much better and the market is wide open for investments. Yet he realizes Libya has room for improvement.

Even though Libya has gone through a lot, there is always some hope in many eyes.

“I think after what happened after these four years, it’s going to take some time but eventually it’s going to get better. It has to.”