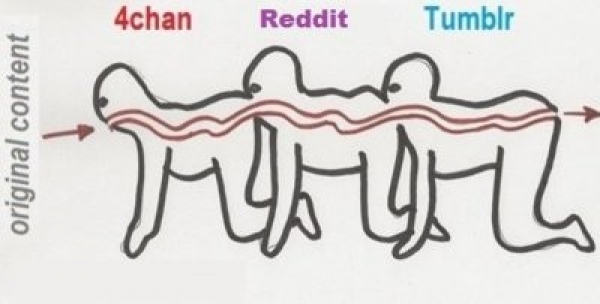 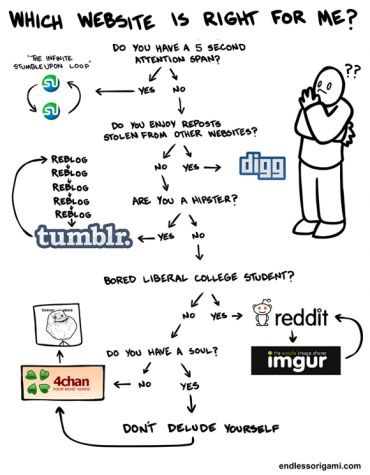 We live in a generation of ever growing technology and the feasible ability to connect with one another seamlessly. We all come from different ilks, lifestyles, and countries, melding together in one giant cesspool commonly refereed to as the Internet.

The ‘Net, however, breaks off into several distinct trails and avenues–each with their own set of rules, opinions, and outlooks on the world. As a result, certain websites become a safe haven to users who share the same passion on the same subjects as everyone else. These sites also offer a place online where people can safely be themselves, but what does the site you visit say about you?

Which is the best? Which the worse? Tumblr, Reddit, and 4Chan, each vastly different in their user clientele, each indiscernible from their impact on the interwebs and the people who use it.

Tumblr is a blogging and social networking platform spanning 420 million users as of October 2014. The sort of blogs users decide to follow determine the content they will see on their dashboard, as this is where their posts can be seen. Posts can be made with pics, gifs, videos, links, or simple text entries. These posts can then be liked and/or reblogged for everyone following you to see.

Tumblr has a very expressive community. Topics very frequently range from social justice to which characters in their favorite book or movie should be dating. Heated debates on sexism, racism, classism, and any other sort of “ism” are taken place here. Many discussions of feminism, mental disorder, and morality take place here as well. More often than not however, these topics are handled indignantly with victimization and accusation rather than any sort of reason or constructiveness. Users also typically use their blogs to post very personal and often exposing diatribes about their own life outside of the Internet, the best of which users will bestow the title “Tumblr Famous,” only given to the most popular of blogs. Other uses include dedicated blogs, where posts only showcase or refer to a single person, place, thing, or desire referred to as “fandoms”; and camgirls, who usually sell sexually stimulating pictures and videos of themselves for money, all the while feeling empowered by the freedom of their nudity.

Despite the very different experiences Tumblr and their users have to offer, a few common trait include that there is no outrage too small to rant over, nothing is inoffensive, and no website is better than itself.

Tumblr is essentially the hippie/hipster of the Internet. 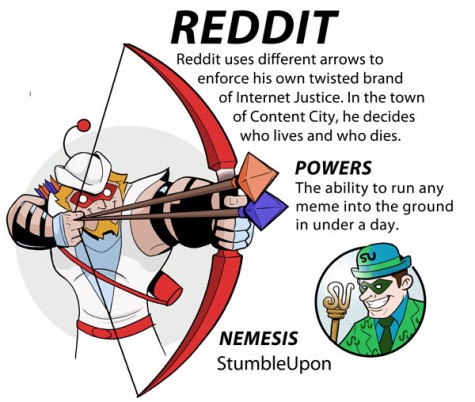 Reddit is a social networking and news website with 172 million users as of November 2014. Reddit is a much more user based site than Tumblr in that registered users dictate what’s on the main page, what comments appear in the comment section, and the different categories available to the site. Content displayed on the main page is dictated by upvotes/downvotes arrows, users (affectionately referred to as Redditors) who upvote a post increase its popularity and pertinence while downvotes leave less worthy entries in obscurity. Users also have the ability to filter what content other users post that appears on the main page, personalizing it to their liking. These posts are divided into different categories called subreddits, of which are available in abundance. These subreddits contain ample information and entertainment on a wide array of subjects, from politics, sports, to science.  Even less serious topics, such as video games, a slew of hilarious memes, and content aimed to make users scream ‘WTF’ have endless hours of content to filter through, which is fleshed out even more in the comments section of each post; comments also revolve around the upvote/downvote system.

Reddit gives off the sense of a place where open opinions and diverse ways of thinking are welcomed, due to the sheer amount of topics, serious or silly, that are available. Often, the contributions to the site have the ability to be lighthearted, thought provoking, disgusting, funny, or macabre. In the comments, funny posts are met with cunning witticism while more serious posts are met with dignified responses. But it is in these comment sections where the users of Reddit show their true colors.

Due to the upvote/downvote system, users can find themselves collecting in a hivemind, discrediting the diversity and dignity so synonymous with the site’s community.  If there is a claim to be made by a Redditor in a debate, other users will look at his or her post history in order to discredit or change the topic to how terrible the user is based solely upon some of the things they may or may not have said in a past comment.

The dignity and wit of Redditors can also manifest into debilitating elitism and overly liberal sensibilities, as chances to prove morally or intellectual superiority are copious given the limitless potential of content to discuss.

Envision an avid reader of The New Yorker in an ironic tuxedo-shirt and you’ll have Reddit’s e-persona. 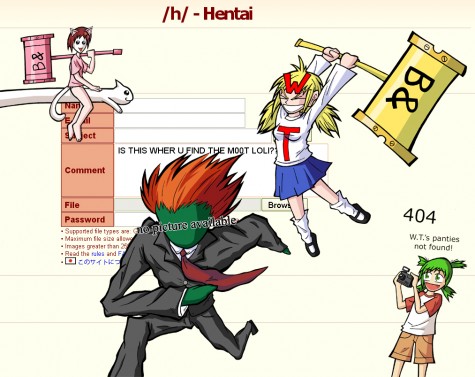 4Chan, (originally a Japanese animation enthusiast site), is essentially an imageboard with content separated into five categories such as Interest, Creative, and Adult with a few subcategories with those to choose from. Registration is not required to use 4chan to its full extent, nor is it possible. Every submission to the site is anonymous. As of September 2014, 4chan is ranked 695 on the Alexa scale, meaning it is the 695th most visited website in the world.

The anonymity of the site is what makes its users and their infamy echo throughout society and why out of the two sites listed, make them receive the most media attention. It allows users to act purely on superego, enabling juvenile behavior, practical jokes, and brash (often racist) statements with little to no repercussion.

4Chan is responsible for the online leaks of female celebrities on Aug. 30, 2014, commonly referred to as The Fappening (A combination of the words “happening” and “fap”–an online meme referring to the sound of male masturbation.) The site is also responsible for fake bomb threats and fake internet movements such as #cutforbeiber, where fans of Justin Beiber cut themselves in order to demonstrate their undying love for the teen idol sensation; as well as #leakforjlaw, which encouraged women to post nude photos of themselves to support the release of nude photos of celebrity Jennifer Lawrence. Users even set their sights on Tumblr, planning to create a massive amount of blogs, gaining an immense number of followers and posting gore and sexual content, while also hacking popular accounts and the Tumblr HQ itself.

Needless to say, 4Chan is not for the faint of heart. Creating laughs based on the misfortune of others is the name of the game. 4Chan revels in this “trolling” as if it were a sport. Given the site’s origin, the community is predominantly male, sharing interests in video games, Japanese comics/animation, and memes, as 4chan is also the site that made memes mainstream.

It’s as if the geeks and nerds of the world banded together to become the bullies they once abhorred in high school.

Which site do you belong to?