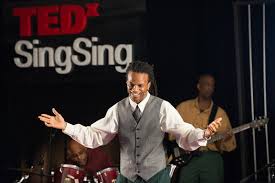 Creating healthy communities was the theme on last semester when Mercy College sponsored the first ever TEDx held in a New York State prison.

The audience was made up of a mixture of esteemed celebrity personnel, Mercy College professors who teach at the prison, and members of the Hudson Link program. The M.C., Jermain Archer, reminded the audience that roughly half of the crowd, approximately 50 men in the audience, had not just arrived at the maximum security prison that afternoon. Rather they arrived many years ago in a less excited state, to serve long prison terms for crimes they have struggled every day to reflect on and atone for.

TEDx is an event of TED Talks, a program that tries to help communities spark conversations and thought sharing under the slogan “Ideas Worth Sharing.” Anyone can host a TEDx event as long as they follow the principles that TED was founded upon.

The men at Sing Sing are unique in that they are not referred to as inmates or prisoners; rather they are referred to as offenders. This is because the term offender implies that there is a chance of rehabilitation. Aside from that, they are unique in a variety of ways, and through TEDxSingSing, the audience got to see just how special these unlikely students were.

Creating healthy communities is quite an unorthodox topic for a prison in the sense that healthy living is made up of choices that at first glance some don’t believe prisoners have the freedom to make anymore. However, the question is posed, how does one build a healthy community for those who are confined to a small geographic location? How does one grow without the “freedom” that others feel is necessary for personal growth and reflection? Contrary to some of the audience’s beliefs, the men at Sing Sing had their own ways of making healthy living choices in spite of their circumstances.

Perhaps one of the healthiest choices that some of the offenders at Sing Sing have made was deciding first and foremost to pursue higher education. This is made possible through the program Hudson Link for Higher Education in Prison, an organization that teams up with local colleges, including Nyack and Mercy colleges, to offer classes at Sing Sing and several other prisons. Through this program, inmates are given the opportunity to take several classes in art, music, English, economics and more. Upon completing the courses they are able to receive a college degree and are given the chance to graduate in a ceremony that is held in the prison.

Mercy College’s professor Charles Garcia was amongst many Mercy representatives in attendance; however, he was fortunate enough to play a special role in the event as a mediator of conversation along with a friend he hosts a popular radio show with. Garcia is known for his rather healthy outlook on life as he is the man responsible for coordinating the various climbs that the school of business has gone on. In addition to his famed mountain climbing hobby, he is also a crusader for making healthy eating affordable for all.

It was the first time Garcia had ever participated in an event like this one. It was also the first trip Garcia had ever made to the well known maximum security facility. There are many regulations in the prison system when it comes to visitors, Garcia was well aware of this; however, he still did not know what to expect once he entered the facility for the first time. All of the guests from outside were prohibited from having any cellphones, PDAs and other electronics that could pose a threat on their person. It had quickly dawned on the guests that for a few hours they would have absolutely no contact with the outside world. This would have made some people anxious since being without phones and internet is something that many can rarely do for a few minutes let alone a few hours.

However, Garcia found this restriction to be a blessing in disguise adding “It was refreshing to connect in a basic human way – no technology, just people”.

The tone was set with the first performer reciting how he came to find himself at Sing Sing. There were many other acts to follow, and then finally a discussion about how the men had built a community and made healthy choices while being incarcerated.

Garcia reflected on a particular offender when pondering what had affected him the most. He is an unlikely urban activist who takes urban blights and turns them into something healthy. One of the ways he had done this was by turning an empty lot in the prison into a garden where others in their community could work and grow their own food, such as fresh vegetables. Garcia then added “one thing that we can all agree on is that healthy food helps us build healthy communities.”

An event like this one is the kind that changes the way that people view not only their communities but the world. When asked if he felt uncomfortable at all throughout the duration of the event Garcia replied, “On the contrary, it was eye opening. Every offender was nice and they were open about their experiences and willing to share. I feel lucky and fortunate to have been in this position and to share this experience with them.”

The audience applauded and congratulated the offenders, many of whom have managed to create something beautiful in a place where beauty is not expected to exist. It was clear that everyone in the room felt forgiveness, compassion and empathy for the offenders, many of whom stated that if they could turn back time they would. The offenders shared that they have more appreciation for love and for family because it is something that has become scarce to them.

Although Garcia has yet to teach at Sing Sing, he is one of many more who will be participating in the Hudson Link program, a partnership between colleges/ universities and prisons, to teach economics to the inmates at Sing Sing.

“I hope to teach at Sing Sing next year with the rest of my Mercy colleagues. I want them to be my students and I honored and grateful for the opportunity,” said Garcia when The Impact asked him about potentially teaching at the correctional facility.

Finally, when asked for a final thought, Garcia shared that by being able to meet with them and connect with them the whole experience had reaffirmed his faith in mankind.

The event ended with one of the Inmates singing a song that touched all of those in the audience including rapper and famed tough guy, Ice T. The TEDxSing Sing event was a wildly successful one that humbled and opened the eyes of all of those in attendance. It is something that the Mercy community is incredibly proud of and is the first and certainly not the last of many events to come.