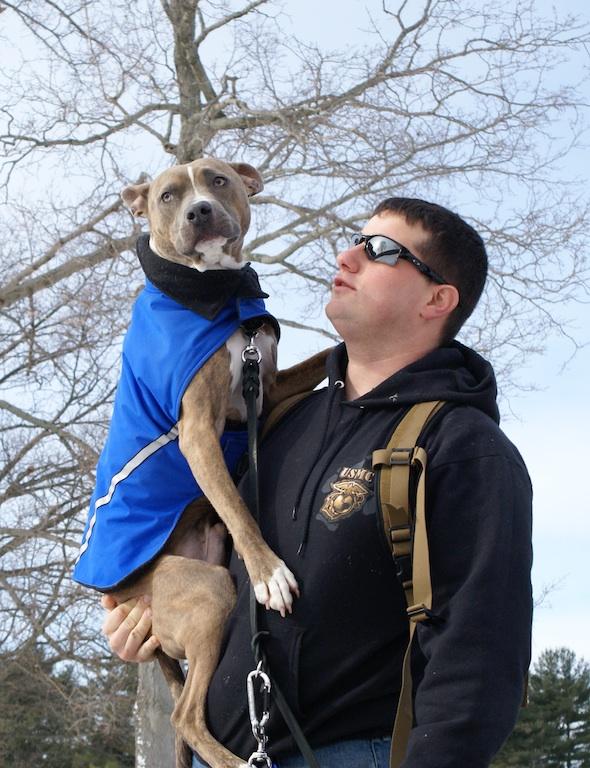 All photos by Adam Smith

At 3 a.m., Joe lies in his bed and seems to be fast asleep, until he begins to get restless. Zen pops his head up from the end of the bed and realizes Joe is uncomfortable. He stands up and walks onto Joe’s body until he finds a pressure point, and lies on it. Joe calms down.

Suffering from Post Traumatic Stress Disorder (PTSD), anxiety, and night terrors, ex-marine Joe Bonfiglio relies on Zen, a two year old Pit-Terrier mix, to help calm him down throughout the day as well as nights.

“He wasn’t really trained fully for that. It was something he just kind of did on his own,” Bonfiglio says of his new sleeping aid. “When my anxiety gets increased, so does my anger, and when Zen senses that he will do things like whine or jump on me to distract my focus to him.

PTSD develops after a person is exposed to one or more traumatic events such as warfare, sexual assault, serious injuries, and even threats of imminent death. Disturbing recurring flashbacks, avoidance or numbing of memories of the event or other symptoms can occur.

Bonfiglio hesitates when asked about the action he saw in the Middle East.

“I don’t really share combat stories unless of course it’s with another combat veteran. I guess I could say that it’s like the Wild West living there. Everything they do is like our old West.”

In August 2014, Bonfiglio received Zen as a part of a therapy to help with his PTSD after serving in Afghanistan with the Marine Corps in the Communication Department, and being medically discharged July 30, 2014. Bonfiglio also has traumatic brain injury from concussions. Zen helps him remember things, stay calm, and helps him sleep through the night. Zen goes through training every weekend to help him with any issues that may occur.

“I would flip out if someone gave me the slightest attitude. Zen keeps me calm everyday.”

When Bonfiglio returned to the States, he went to Camp Lejeune, North Carolina. He spent a few weeks with his family in a beach house with a lot of support from his mother. Even being back on a Marine Corps base, it was a tough transition for him and he didn’t get help for his PTSD until almost two years later. 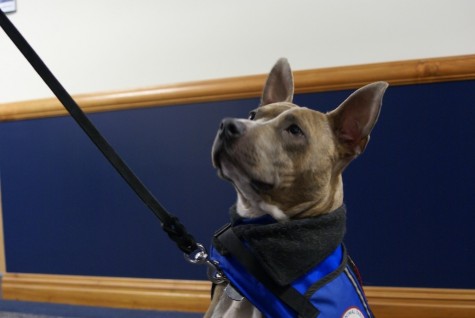 PTSD has affected Bonfiglio’s every day livelihood. It has made his motivation to go out with friends more difficult because it dampens the motor drives and leads to negative thoughts. After being diagnosed, Bonfiglio likes to plan exactly where he is going to be for his own comfort.

“I can’t go to a club or bar on a busy day. I get very nervous and keep my back to the wall, always scanning the room like a combat zone, or always people watching. I’m always looking for the easiest escape route.”

Not looking forward to destroying his liver at such a young age, he wanted to stay off the meds. Bonfiglio looked for alternate treatments to help with his PTSD. He talked to his doctor and mentioned that another Marine on his base has a service dog, and how it seemed to actually help. Bonfiglio thought it was a much better choice than constant medication. 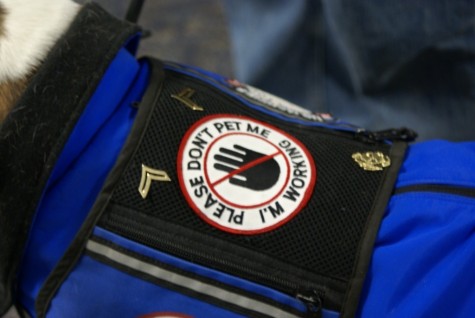 Initially, it didn’t go as planned. Zen wasn’t the dog that Bonfiglio wanted. When the two were first introduced, Zen was very timid, nervous, and attached to the trainer. The trainer left Zen with Bonfiglio so they could get to know each other, and eventually they bonded.

“He’s like my crutch. Without him, I would never come to school, I would be at home eating cupcakes,” Bonfiglio joked.

Going from the battlefield to a smaller relaxed environment at Mercy, Bonfiglio explains it can still be difficult. When he first began attending classes at the Yorktown campus, he was having issues with having Zen accompany him. Because Bonfiglio wasn’t blind, it was said that Zen wasn’t a proper service dog. After working with the Office of Accessibility, Bonfiglio got all of the issues worked out, and now attends the Dobbs Ferry Campus.

“I came to Mercy and met with Albert Oquendo, the Associate Director of Military Recruitment, and he painted a good picture of Mercy.”

Zen seems to do well around campus according to Bonfiglio. Professors don’t have a problem with him, and he behaves in class, except for the occasional slip of some gas.

“One professor is actually afraid of dogs, but she’s comfortable with Zen. She understands he helps me. I’ve had professors bring treats for him a couple times,” Bonfiglio said.

Bonfiglio and Zen have made themselves comfortable around campus, and are very well known. He is looking forward to the rest of the semesters he has left at Mercy, and is happy Zen can be by his side for the journey.

“They are called ‘battle buddies’ for a reason,” Bonfiglio said. “When he’s on duty, he is sharp as a knife, but when he is off duty, he’s a giant goofball.”