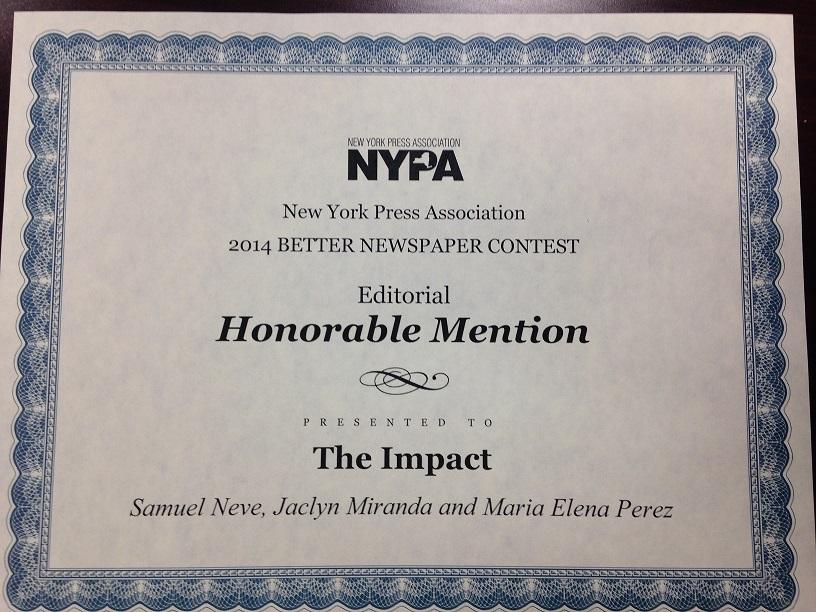 The Impact is pleased to announce that three of their staff members have been awarded honors by the New York Press Association for editorial writing in the 2014 Better Newspaper Contest.

Maria Elena Perez, Jackie Miranda and Samuel Neve teamed together to write a collection of dynamic editorials that the NYPA deemed to be one of the best in the state. An editorial is an opinion piece about a current event topic written by staff members that reflect the opinion of the writer or periodical.

This is the fourth NYPA award the Impact has won, and the first time Mercy College has won NYPA awards in consecutive years.

Maria Elena Perez, current managing editor, focused on race relations in her editorial in February after the infamous Richard Sherman.

Samuel Neve, an exchange student from Great Britian who studied at Mercy from 2013-2014, was the opinion’s editor during his run with The Impact. His editorial focused on the debate of capital punishment.

Jackie Miranda, the current opinion editor, focused her editorial on the feminism movement, it’s significance, and it’s impact on future generations of women.

Errante’s story was titled Dangerous ‘Molly’ Usage Growing On College Campuses and dealt with the rising problem of the new designer drug MDMA.”

DeBella’s story was titled Exonerated Mercy Alum Helping Others Gain Freedom and told the story of a man who was wrongly incarcerated for 23 years.

In 2007, Katie Ryan earned a second place News Reporting award for her article titled,” The War On Terrorism: Are You Properly Informed?”