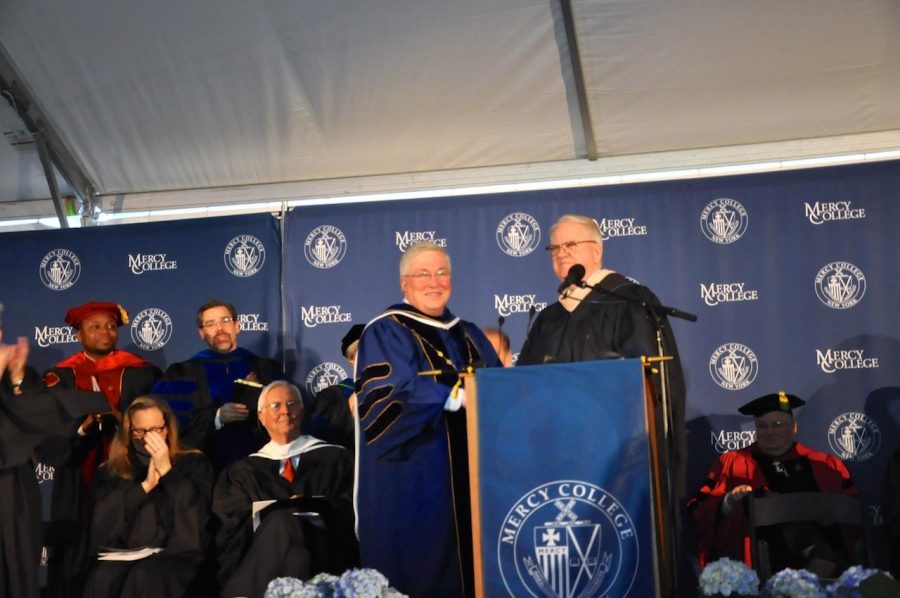 The inauguration not only marks the formal commencement of Hall’s presidency, but it also celebrates the year in which he has already been serving as the college’s voice and leader.

Hall has previously served as President of Austin Peay State University in Tennessee for seven years. Prior to making his way to New York, Hall has made significant changes at his previous colleges where he has been a faculty member.

From campaigning to raise $50 million for a new environment for students to practice and earn law degrees, to supporting innovation in higher education, Hall is determined to bettering students’ lives.

“From the start I was attracted to the Mercy College mission of providing motivated students the opportunity to transform their lives through higher education. Now I am committed to it. I believe a college education is about more than accumulating credits, or even preparing for a good job: it’s about transforming a life.”

Ray Woznick, vice president of the student body, is excited about the presence Hall has made on campus so far, and he looks forward to what the future brings with him in office.

“Although President Hall has only been with us for a year, he has made a positive impact on the students, faculty, and staff at Mercy College,” said Woznick.

Being able to meet with the President every other week on behalf of the Student Government Association, Woznick has noticed that with President Hall’s help, the student government has been able to accomplish goals that they have not been able to do before.

With Hall’s willingness to help and his enthusiasm he brings to the students, he has helped the Student Government grow which will better the Mercy College Community. Hall’s tenure at Mercy College has been a positive experience, according to students who have spoken to The Impact. Even though he has only been with the college for a short time,Hall has managed to meet with students individually, show his school spirit at at least one of every sporting event, and come up with different ways that Mercy College can have more of a “high touch” educational experience.

As Hall often quotes, “An alma mater, knowing her children one by one, not a foundry, or a mind, or a treadmill.”

Continuing with what Mercy College takes pride in doing, knowing the students individually, Hall wants to ensure that each student receives the opportunity to be successful.

“It isn’t enough to get them to college; we need to get them through college and to graduation day,” said Hall.

Leading up to the inaugural ceremony, Hall participated in many activities the previous week, which were organized to celebrate President Hall’s big day.

Hall traveled to all four of our campuses each day to take part in a variety of activities.

On Monday, the exercise science club hosted a special Boot Camp Fitness Class at the Dobbs Ferry Campus, and on Tuesday, Hall participated in a poetry reading session at the Bronx Campus.

On Wednesday, Hall traveled to the Manhattan Campus where he explored the Central Park Zoo with his students, and on Thursday, Hall made original paintings with the students and faculty at the Yorktown Campus.

Other activities that he participated in included “Operation: Cupcake,” the delivery of 50 cupcakes to leaders in the community and friends of the college, a dodge ball tournament, and viewing a presentation of the play, Macbeth.

Students, faculty, and staff from all campuses came together to host what was a perfect inauguration for the new President, Timothy Hall.

The event was held on the athletic field on the Dobbs Ferry Campus overlooking the beautiful view of the Hudson River.

Attending the event from all over the states were Hall’s family, old friends, and past colleagues. Also joining the ceremony were students, faculty, and residents of the Mercy College and Dobbs Ferry community.

Amanda Depew, a freshman in the media studies program, volunteered at the event, and had an experience most wouldn’t get to expierence.

“It was an honor to help with the event. I got to meet with many faculty and administrators from Mercy, as well as important people in President Hall’s life,” said Depew. “The experience made me feel more connected to the school as well as the community.”

Throughout the ceremony, there were many speakers who welcomed Hall into the community and congratulated him on the advances he has brought to the college and will continue to make throughout his time here.

Hartley Connett, Mayor of Dobbs Ferry, announced that April 17 is officially Tim Hall Day. Connett also confirmed that Dobbs Ferry was a college town, and he is committed to developing and continuing to grow a great relationship with the college and the Dobbs Ferry community.

Sister Vetrano has confidence that President Hall has met and will continue to meet the standards that the Sisters of Mercy has set for this school.

They both believe that a college degree is absolutely necessary in today’s society. With a growing population and a small number of jobs to be filled, Hall and Johnson view higher education as one of the pillars needed to receive a high paying job.

Johnson and Hall also believe that one learns more than the typical curriculum in college. They trust that being surrounded by other students and being involved in numerous activities will help students grow and evolve into young adults who will one day rule our world.

Speaking on behalf of the faculty, Dr. Peggy Tallier, Associate Professor and Program Director of Nursing and Faculty Senate President, discussed the process of choosing Mercy College’s new president. She felt that the decision of hiring Hall was the right one, and she has confidence that he will fulfil the duties that he has planned for the college.

Angel Cespedes, President of the Student Government Association, spoke on behalf of the students of Mercy College and stated that the students, faculty, and staff have found that he is extremely humble yet confident at the same time, while still being able to have fun.

“We call him “my friend, Tim.” He eats lunch with us, supports us at our games, jokes with us, and invites us over for dinner,” said Cespedes.

A sentiment echoed by many on campus.

“President Hall is humble and inspiring,” added Cespedes. “He has won the hearts of the students. He is the kind of President Mercy College needed and deserves.”