Dealing With the Identity of More Than One Race 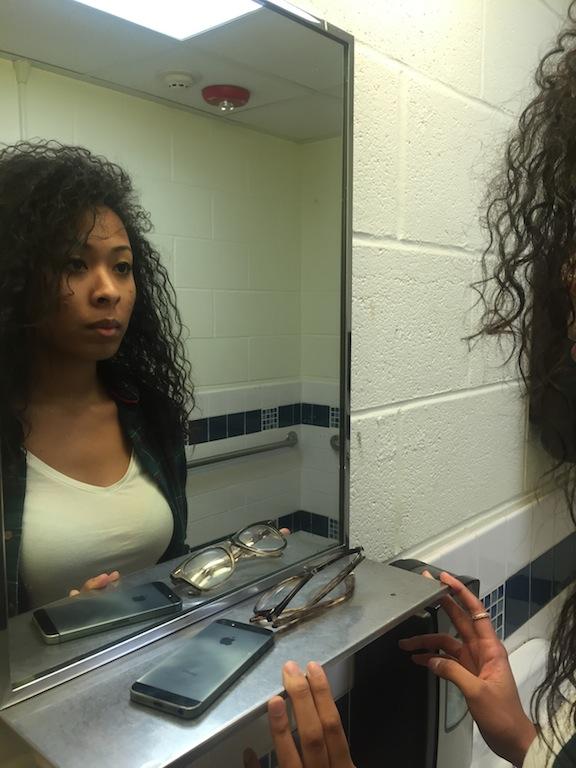 In the second grade, a young and self-conscious Sabrina Burton begged her mother to assist her in straightening her naturally curly hair in hopes of fitting in with her peers. Burton’s mother gave in and began relaxing her hair, which is the process of adding harsh chemicals to coiled hair in order to make the curls straighter and more manageable.

Burton, now a 21 year-old physicians assistant major at Mercy College, grew up in a predominately white neighborhood in Warwick, New York. At first glance, Burton looks like a mixture of Asian and Hispanic, but she is much more than meets the eye. Her mom is mixed with Filipino, Chinese and Spaniard, but looks Asian, and her father is a combination of Cuban and Jamaican decent, but to Burton, “Looks black. He is black.”

Burton, who stands at about 5’5”, petite with curly dark brown hair and almond-shaped eyes, could pass for either Asian or Latina with a slight tan. However, Sabrina sees herself far different.

“I identify myself as black because that’s what I look like. And usually, I would be the only black person in my class.”

Burton had a difficult childhood growing up in a small town where everyone around her looked similar. She recalls being taunted with names such as cotton head and Pikachu and was often told she looked as if she had been electrocuted.

Although being picked on played a big part in Burton’s identity issues, she felt as though no matter what, it would have happened eventually. “You’re surrounded by a bunch of people who all look the same and you’re the only odd man out. Yet even if I wasn’t made fun of, I still would have wanted to look different.”

Burton struggled with her identity so much she admits that at times she didn’t want to be seen with her parents, fearing that strangers might assume she was adopted because her looks slightly differed from that of her mother.

“This is going to sound bad but…,” Burton says as she slowly prepares herself for what she’s about to say next, a thought that has been on her mind for a long time. “…I was hoping that in my next life, I’d be born a white girl with blonde hair and blue eyes.”

School wasn’t the only place that Burton felt out of place. Because she is closer to her mother’s side, she spends almost all holidays and quality time with her mother’s family, yet she still feels like an outcast.

“I feel as if they’re all looking at me like I have five heads. Everyone from my mom’s side is short – I’m tall. Their hair is pin straight; mine is curly,” she says, adding that she is the darkest on that side of the family.

Now that Burton is older and has experienced a social life outside of her hometown, she is aware that she looks slightly Asian, but completely understands if others don’t see it. She explains, “My Asian friends don’t think I look Asian at all. They don’t see where the Asian comes from, so I feel like if you’re black, then you would know that I’m mixed, but if you’re white or Asian, then you’d probably just assume that I’m black.”

Though her skin is tan, Burton’s biggest issues were with her hair. She would stand in front of a mirror and stare at her frizzled mane, hating each strand. Burton despised her hair so much that the thought of shaving her entire head crossed her mind more than once, “Because I was so young, I didn’t realize that if I shaved my head, it would just grow back the same way. I thought it would grow back straight.”

Today, Burton’s views on hair are completely different. In fact, she wears her hair curly more than she does straight and even wishes that her hair could be more fluffy and curly. She gives much of the credit to her former roommate.

Burton’s roommate’s easy hair routine inspired her to give the natural look a try, and once she did the responses she received were positive.

“I started getting compliments and I just stayed with it,” Burton says.

It has been an entire year since she’s completely converted to her curly look and despite her tough past, battling to accept who she really is. Burton says she is proud to be Asian and black.

Most recently, people have assumed Burton is either Spanish and once in awhile Asian, but after informing them that she is a blend of Asian and black, she usually gets responses like, “That’s cool,” or “That’s different,” and because of those reactions it has made it easier for Burton to accept herself. “I guess they’re right; it is cool. I’m cool,” she laughs and then affirms, “I’ve accepted it.”

Even with all the controversy of her being mixed and different from everyone else, Burton has learned to grow out of it all. “You learn to grow into yourself and accept the things you do and don’t like about yourself.”

She advocates, “It’s about loving yourself.”