The War on Terror: Has it Run It’s Course? 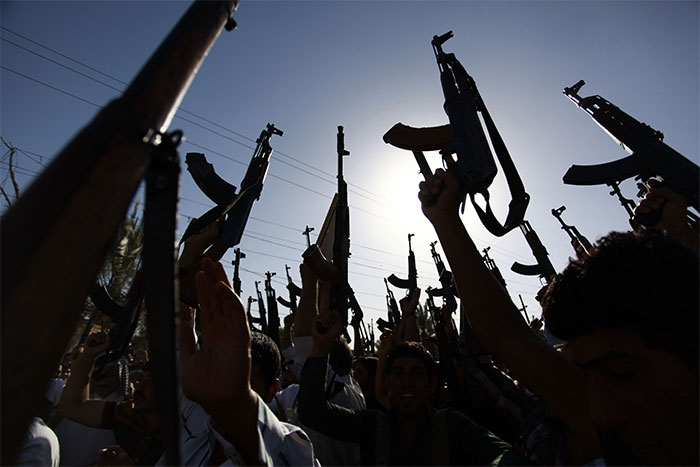 Fourteen years ago, early on the morning of Sept. 11, 2001 , several members of the Islamic extremist group al-Qaeda hijacked four planes, three of them successful in hitting their targets, the World Trade Center in New York City, and the Pentagon in Arlington, Virginia. After a tussle in the skies, the fourth plane, United Airlines Flight 93, crashed into a field just outside of Shanksville, Pennsylvania.

Though an attack on the World Trade Center was carried out in 1993, killing six and injuring a little over a thousand, not since the 1941 attack on Pearl Harbor, executed by the empire of Japan, has an attack on United States soil occurred and ushered the country into a period of war.

Since that day, the last 14 years have resulted in nearly continual military action in the Middle East, heightened security domestically, billions of defense dollars spent, and a turbulent economy.

According to Lutonya Russel-Humes,  adjunct professor of Freshman and Junior Seminar at Mercy College, by definition a social movement must posses a series of certain elements including WUNC, (Worthiness, Unity, Numbers, and Commitments); repertoire, which is to say a certain language addressing the issue at hand, and finally a campaign, a sustained central idea  which publicizes the issue to the masses. If indeed these elements be the necessary ingredients in the recipe, the 2001 United States invasion of Afghanistan in response to the attacks of 9/11 constitute a War on Terror to be considered as a modern day social movement.

Amid a range of emotions including grief, anger, revenge, and hate, the majority of the country was clear on who the enemy was, tuned in daily to the news for the latest updates and presidential speeches, and supported the president and Congress’ decision in 2001 to invade Afghanistan. Yet 14 years later, a new president, new generation of intellectuals, college students, and voting citizens, is that still the case? A key indicator that a cause has lost its savor is when its constituency can no longer  trace its origin and/ or find present validity in its purpose, experts say.

After being asked the questions, “Do you follow the War on Terror? Which country was the first one the United States entered into war with, and against which organization?” Brooke Gonsalves, 23,  Behavioral Science Major responded, ” No, It’s really scary.. but all I know is that they want to bomb malls to install fear.  In the Palisades, there is an alarm in case of suspected terrorist attacks.”‘

Though she admitted that the War on Terror was not on her list of priorities, she was able to offer the correct response that it was indeed Afghanistan and al-Qaeda the U.S. initially was fighting against. This conflict is starting to challenge the memory of other Mercy students, who were    children when the war began.

“It was Iraq, no It’s Iran. Is it Afghanistan?… And I’m only saying Afghanistan because I read The Kite Runner,” responded Vickie Mason, 21, biology major.

Nora Paoliello, 39, of the Bronx , who was 25 at the time the war began,  responded with answers such as ” Saddam Hussein…. Iraq… and the Taliban.”

Other students who were asked about the War on Terror proved it isn’t simply an issue which present day young adults no longer have interest in; a number of citizens middle aged and  older can no longer trace the origin of the war off hand, thus calling into question its present day validity by skeptics.

Unlike wars such as the Revolutionary War, Civil War, and WWII, where the battles were fought against nations with a clear agenda, much like the Reagan administration’s 1980’s War on Drugs, the War on Terror is unique in that terrorism, because of it’s nature,  is an ideal, a philosophy, rather than one central entity.

Mercy College Freshman, Joe Bonfiglio, 25, a veteran of Operation Enduring Freedom, the official name for the War on Terror, had this so say with regards to the efficacy of the war:

“Terrorism, no matter what you do is never going to stop. We killed Osama and Hussein, but there are always new people to take over.”

For citizens like Bonfiglio, who served in the armed forces and have seen first hand the devastation war can bring, to articulate feelings opposing the war speaks volumes. Because of some Americans’  views of Islam and lack of understanding which still plagues this nation to date, Bonfiglio also went on to say that,  “not all Muslims are bad people, yet you can’t kill an ideology….the only way to really eradicate something is to level it out”.

Unlike the 1945 launching of the atomic bomb, which leveled the Japanese cities of Hiroshima and Nagasaki,  elaborate networks of insurgents who reside around the globe without one nucleic station lack the vulnerability to be annihilated in one single strike.

In 2001, the issue was Osama Bin Laden, al-Qaeda, and the Taliban’s  influence in Afghanistan. By 2003, the war had shifted its focus to Saddam Hussein and Iraq, under the impression that he’d been not only harboring terrorists but had ‘weapons of mass destruction’ in his possession, though none were ever recovered.  Though the United States extracted all combat soldiers from Iraq in 2011 and officially ended the war in Afghanistan in December of 2014, the present fight against ISIS (Islamic State of Iraq and Syria), a spinoff group of al-Qaeda, in countries such as Iran, Iraq, and Libya, only validate Bonfiglio’s claims of the perpetuation of ideals of this never ending war.

Although the longest war in United States history hasn’t been fought on the streets of America, the American experience would forever be changed.  President George Bush declared, in a 7 p.m. speech on Sept. 11, 2001, that “Terrorist attacks can shake the foundations of our biggest buildings, but they cannot touch the foundation of America. These acts shatter steel, but they cannot dent the steel of American resolve.” A few weeks later, the Commander in Chief signed the Patriot Act, thus putting the Bill of Rights on hold, according to skeptics.

“We’ve played it up.  The Bush regime played it up, and we fed into it. Our constitutional rights are under siege, in particular the right to privacy. We’ve traded security at the expense of our privacy,” said Professor Manny Santapau, 65, professor of political science and history.

” Al-Qaeda disappeared, then Iraq.. what for? Four trillion dollars and we might have to go back. We’ve created a new boogeyman, ISIS, and the boogeyman du jour. We should let them at each other and let it play out,” said Santapau.

That’s not to say human rights aren’t an important issue. “Saddam was a dictator and a murderer, but we’ve got governments like that all over the world… this was about oil… and once you get rid of ISIS, it’ll be somebody else,” Santapau later went on to explicate.

Some feel the war has run its course. According to Santapau, it ran its course once the U.S. invaded, and secured Afghanistan and then tried to do too much.

Some question how effective the war has been on eradicating terrorism on a global scale. ISIS steadily beheads Christians in Syria. Boko Haram, the Islamic extremist group in Nigeria responsible for the kidnapping of more than 200 girls in May of 2014, still has in its possession the vast majority of these girls. Boko Haram also was responsible for the deaths of over 2,000 in January of 2015. Though the mainstream media tends to focus its rhetoric on radical Islamic groups, terrorism isn’t even remotely limited to radical Islam. A long list of groups including Islamic Movement of Uzbekistan (IMU), Revolutionary Armed Forces of Colombia (FARC),  Real Irish Republican Army (RIRA), and Communist Party of the Philippines/New People’s Army (CPP/NPA), just to name a few, can be found on the U.S. Department of State’s list of terrorist organizations. Some of these groups have been in operation for almost 20 years.

By definition, terrorism is the use of violence to intimidate and coerce. That being said, the United States, as evident through the gang violence of groups such as the KKK, MS-13, the Blood, and the Crips, just to name a few, in addition to the recurring violence against blacks, in particular, black men, has yet to eradicate terrorism on a domestic scale, yet continues to attempt to lead the war on a global platform.  Much like the war in Vietnam, which proved unsuccessful in its fight against the spread of communism after American withdrawl, the War on Terror may be emulating the same pattern. This time, however, some argue the American people have lost sight, interest, finance, and various individual liberties.

Santapau added, “It’s a different world and I feel so sad for your generation; they know who and where you are, and there’s no more privacy.”