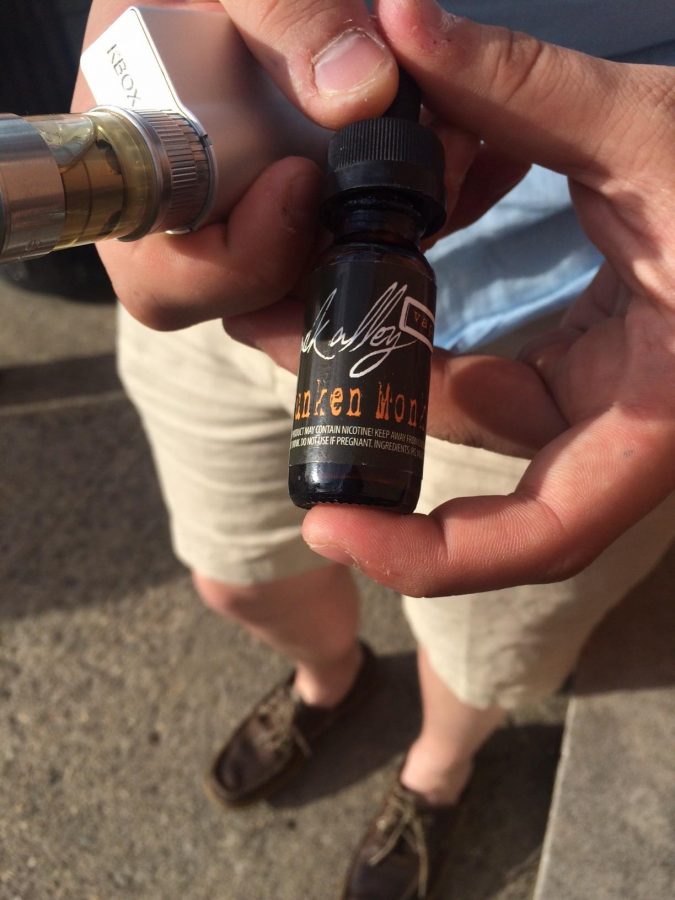 Similar to a book, smoking has evolved from a tangible activity involving papers, into a technological endeavor that has evolved the way the product is consumed. No, that man holding the metallic instrument with clouds floating above his head is not a wizard…he just likes to vape.

Instead of burning your smoking material in the open, vaporizers have allowed users to discreetly heat their product at a non-burning temperature and produce a non-offensive vapor cloud. Vaporizers, also known as vapes, come in all different sizes, colors and builds to heat oils, wax or dry herbs, extracting their ingredients and delivering the most potency from your product.

The popularity of vaping has sprung about its own culture and way of life for smokers, and has found its way to the campus. The conspicuous small sizes and non-lingering smell attracts students who want the freedom to smoke whenever they want, while others enjoy the cleaner sensation of vaping as an alternative to cigarettes; as well as for the many assortment of flavors that range from fruit, cereal, to pastry treats.

Kevin Powers, a student who vapes on campus, says vaping is a hobby, but is also a healthier alternative to cigarettes.

“A lot of people on campus are smokers, but a lot of them also have friends who vape and who’ve introduced it to them. They start liking it because it has different flavors and if they like, menthol (…) tobacco is the thing that kills you, right? That’s not in here, it’s just propylene glycol, which is an USA FDA approved substance – it’s vegetable glycol and nicotine.”

According to ecigalternative.com, tobacco cigarettes are made up of several severely toxic chemicals that include acrolein, hydrogen cyanide, and nitric oxide; each of which slow down organs and exacerbate the risk of cancer, kidney, and liver damage. Not only do these chemicals affect the smoker, but also effects anyone in the room inhaling second hand smoke. The only other chemicals that are involved in vapes and other ecigs are in the flavors, which from a reputable merchant, are food grade and considered safe, just as propylene and vegetable glycol.

“Propylene glycol is used in many food and medicinal applications, as is vegetable glycerine,” states ecigalternative. “The liquid also usually contains some food-grade flavouring and may contain nicotine – the addictive element of tobacco. Unlike cigarettes, no combustion occurs (in vaporizers) – and burning materials at high temperatures is the major source of health problems associated with tobacco.”

Vapes that have the ability to burn dry herbs are usually used to smoke marijuana for its discreetness and potency. For example, the PAX by Ploom is a high-end dry herb vaporizer that produces little to no smell on its lowest heating temperature, which gives off little to no odor while heating pure THC into vapor. By doing this, smokers effectively inhale all the compounds of Cannabinoids without inhaling the toxic by products found in smoke. It is even commonly said that the high of a vape is much more subtle than if smoked.

“Herb vapes are popular on campus because if you’re living in the dorms, hotboxing in your room isn’t necessarily the best bet if you want to stay of trouble,” says Powers. “There are a definitely a lot more oil vapes on campus, just because the dry herb vapes are expensive.”

The cost of a vaporizer vary. E-cigarettes can be bought for under $100, while the high end market of vaporizers tends to surpass $300. One of the most popular models is the Volcano, which runs for roughly $600. The most expensive vaporizer is the Herbalizer, with a price tag of $700. For that price, it offers the ability to vape up to 445 degrees with absolutely no risk of combustion or incineration, which the product claims is “unheard of in the realm of botanical vaporization.”

The combustion and inhalation of any type of plant releases toxic compounds and smoke will create inherent health risks, marijuana is not excluded. “Mary Jane” is typically smoked with joint paper, bongs, and pipes which are usually smoked unfiltered. If unfiltered, more tar is injected into the lungs than tobacco does in a full cigarette.

Some of the belief that vaping helps cigarette smokers fully quit the habit, but statistics show that is not necessarily true is all cases, and that vaping is not a means to quit cigarettes, but just another way to enjoy smoking. A study published by the journal Addiction in May of 2014 stated that over a five year period of those who attempted to quit smoking in the United Kingdom from 2009 to 2014, only eight percent were successful due to e-cigarettes, and that the most proven method was still cold turkey.

Yet the study showed that those who vape had said it certainly contributed to cutting down on cigarettes. Of the more than 2,000 former smokers in the survey, 96 percent reported that the e-cigarette helped them stop smoking.

“On campus, my ten closest friends vape,” Powers explains, “seven of which have the same vape that I do (Kanger KBOX MOD), two of which have small G Pens, and one who doesn’t actually vape. He’s just there for the ride.”

Almost on cue, that friend in particular walks by and introduces himself as Jayvon. When asked what it was like to be surrounded by friends who vape being the only one that doesn’t, he replied by saying “I don’t mind it. It smells nice whenever they vape. But there are some roommates who kind of take it too seriously.”

As they both chuckled, Jayvon elaborated for a bit. “There are some guys who have a vaporizer that match colors with their shoes or their hats.”