A Student Marine with a Positive State Of Mind 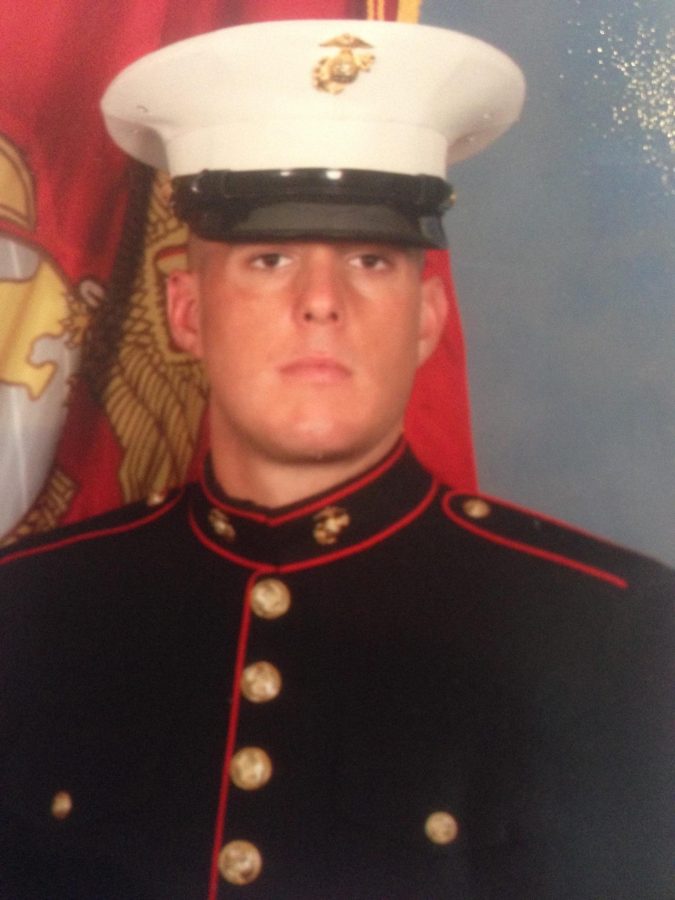 A helicopter crash-landed in the ocean and is submerged in water. Greg Andris is inside the helicopter as the water level begin to rise. He has what could be a minute to escape – perhaps seconds. The water is at his chest. To his neck. To his mouth. He inhales his last breath of air before his nose is under too. Perhaps a minute to escape.

One minute – that is how long Andris had in the crash simulation training during his time in the Marine Corps.

Andris was put through multiple types of simulations during his time with the self-described Leatherneck branch, in preparation for the various mishaps that might occur in the field. One of these was the helicopter simulation, where he and his comrades were placed in a helicopter that was in a pool containing 20 feet of water. After they had run through it with no assistance, and only after, would they be given the breathing apparatus that would make the challenge easier when they were told to do it a second time. Another was the overturned car simulation, where Andris and his comrades had to escape a Hummer while suspended upside-down. An additional challenge they faced was being forced to run through tear gas.

These simulations have successfully scared many away from the Marine Corps, for many are not drawn to the threat of drowning and blood rushing to the head. This was not the case for Andris.

“I had fun doing all of it,” said Andris with a smile.

Now a student at Mercy College, positivity was what lead Andris through difficult moments. Most people have doubts about whether or not they are cut out for the Marines in the first place. They are concerned about the risks if they make it in. Andris never doubted himself.

“I knew I was going to make it,” said Andris, confident in his abilities.

The Marine Corps, a branch of the Navy since 1834, establishes a sense of community between comrades that eliminates the need to feel doubtful. Andris and his comrades supported each other. Even in dangerous situations, there is little time to stop and think about failure. They don’t have time to worry – there is always work to do.

“When you’re in the Marines, you feel like you are a part of something bigger. There was always a feeling that everything would be all right,” said Andris.

Andris was initially inspired to join the Marine Corps from stories he heard from his grandfather during his childhood. He was drafted into the Army during World War II, and was part of an Anti-Aircraft Battalion that managed to survive the perilous Battle of the Bulge against the Germans in Belgium.

“It was the dead of winter and fierce fighting ensued as the Germans pushed through American lines. My grandfather’s feet almost froze off.  His toes were black until the day he died,” said Andris, reminiscing about the influential stories from his childhood.

Even with the risk of death going through his mind, Andris’ hope never faltered. His family had nothing but pride in him when he revealed that he planned to follow in his grandfather’s footsteps.

The Marine Corps had to endure various challenges. Some of the more frequent ones Andris had encountered were Humanitarian Deployment projects. This included a wide range of possible tasks. He and his platoon were required to remove active bombs from the Vietnam War that never detonated and had the chance to claim lives.

“After four years, my contract was up, and I thought very hard about where to go and what to do. Part of me wishes I had stayed. I see my brothers still overseas, and I feel like I should be there by their side. I miss the friends I made and some of the places I went,” said Andris.

Andris left the Marines with a positive mind state on his experiences after all that had happened. He then needed to move to the next chapter in his life, and decided that Mercy was the place for him, based on how well the college treated those who served in the military.

“My transition to Mercy was a cinch, since I had two years of community college in San Francisco under my belt.  I am now a 4.0 student and have applied for the honors program.

He has carried positive traits from his time in the Marines that have helped him keep his enthusiasm high. Leadership skills, self-confidence, pride and increased intelligence were all qualities that Andris feels were enhanced by the Marine Corps. This self-confidence and increase in overall morale isn’t something that every ex-Marine can say he has experienced, he says. Many suffer from Post-Traumatic Stress Disorder, or PTSD, and fail to carry that positivity throughout their everyday lives when they return home.

Andris says it is that positivity helps him cope and live a prosperous life.

“No matter what branch you served and what you did, you are an important part of this world, community and school. September was Suicide Awareness Month, and the suicides of veterans are at an alarming all-time high. If I could inspire any veteran transitioning back home, I would be happy.  There are professionals at the V.A. (Department of Veterans Affairs) who are trained, and most importantly, eager to help.”

He added, “If I could inspire anyone to join and serve his or her country that would be amazing.  But it’s not for everyone.”